You know those cheap little things you can buy in the checkout line at CVS that say "turns anything into a speaker!" where you plug your iPod into one end and stick a big suction cup on your window or kitchen table or car or whatever and the whole thing vibrates and it usually sounds like shit? Well, Yamaha went and did that for a whole piano, but it’s not cheap and you can’t buy it at CVS and it sounds kind of amazing.

The Japanese manufacturing giant unveiled the $16,000 U1TA upright piano yesterday at the NAMM show in Anaheim, which will be available in April (a grand piano follows in November for $34,000). From the outside, it looks exactly like any other traditional piano with a MIDI brain strapped on it. 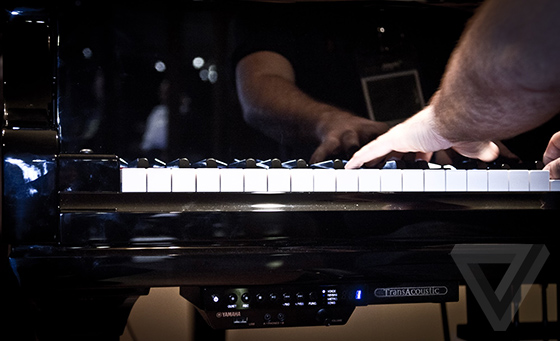 And like Yamaha’s other offerings, you can play it in old-fashioned acoustic mode, or a special "silent" mode which mutes the actual hammers and allows the player to listen to MIDI-reproduced audio through the onboard computer’s headphone jack. But with the U1TA, there’s a third way: "TransAcoustic" mode. Where most all-in-one digital pianos have a traditional speaker mounted somewhere in the body of the instrument, this machine doesn’t have any speakers at all. Sort of.

Speakers normally work by moving a metal coil attached to a cone back and forth around a magnet. But in the U1TA, there is no cone — the coil is attached to the soundboard of the piano itself, so the whole freaking thing vibrates to reproduce sound. 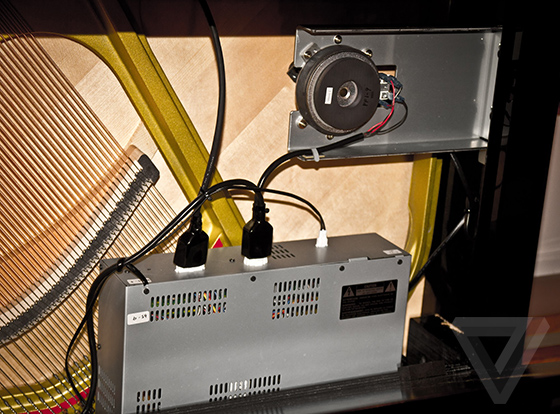 A peek under the hood of the U1TA. Notice how this looks like a super-serious version of that CVS gimmick.

While the TransAcoustic effect isn’t something that will necessarily blow your mind, there is something distinctly pleasing about the sound that I’ve never really experienced before. You know how when you’re in a room with a piano, you can sort of feel the notes floating from all the nooks and crannies of the instrument, even the non-musical parts like the legs and cover? It’s as if the whole machine is coming together to make noise for you — and that is the feeling you get from the U1TA, not just from hammer-struck strings, but from digitally reproduced sounds resonating through the very same physical medium.

Yamaha has brought old and new together in perfect harmony

Using the TransAcoustic brain, you can layer those sounds — everything from "grand hall" reverb to choir voices — on top of the the natural piano resonance so that physical and digital sounds get muddled up in the same signal and you can’t really tell them apart. While this may seem like anathema to piano purists, it might actually be a small step towards finally burying one aspect of the "analog vs. digital" debate: instead of pitting old and new against each other, Yamaha has brought them together in perfect harmony to create a new kind of experience for solo players or audiences listening in small venues. It’s the sort of niche-y, incremental improvement that only a monster-sized company like Yamaha could afford to develop and deploy.