In nursery rooms across the world, there's a very specific form factor of instrument that's been repeated by scores of manufacturers for decades. The idea is always the same: a sturdy little two-octave piano with a super-distinctive, detuned plink sound, perfectly proportioned for toddlers and built to withstand the rigors of intense musical edutainment. If there are children in your life in 2014, you could get them the standard Hello Kitty-themed version for $60 — but a new offering from Korg might leave them lusting for something with a lot more going on under the crayon-proof hood. 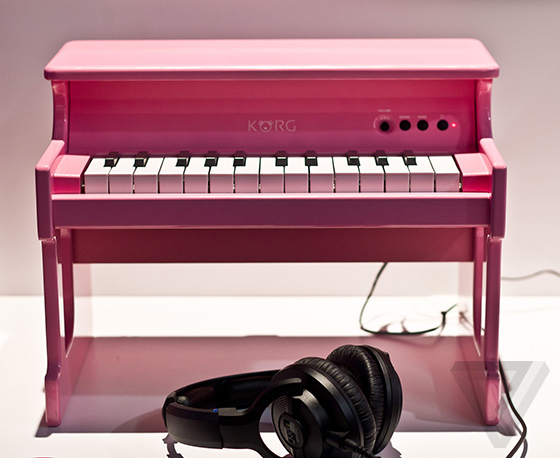 From a distance the tinyPIANO looks like the instrument you grew up with, but once you get up close, things start to feel more Lady Gaga than Cookie Monster. It's available in high-gloss red, white, black, and pink — and the Korg logo has morphed from its robotic original to thin type with a teddy bear-adorned "O." It's the little things, right?

Unlike the traditional version, there's no acoustic action here — the 25 heftily weighted keys can be used to select any one of 25 "patches," which is a super-awesome thing to be able to say at the bar about the new toy you just bought for your kid. There's a perfectly emulated version of that classic detuned plink to start off with, but Junior will soon be browsing a sound library that includes a Rhodes, marimbas, pipe organs, and steel drums, something you can't say for that cheapo Sanrio joint. There's also a library of 50 songs (a little "Happy Birthday To You," some "Jingle Bells," and a dash of "Für Elise"), all of which emanate from the built-in speaker or a headphone jack. 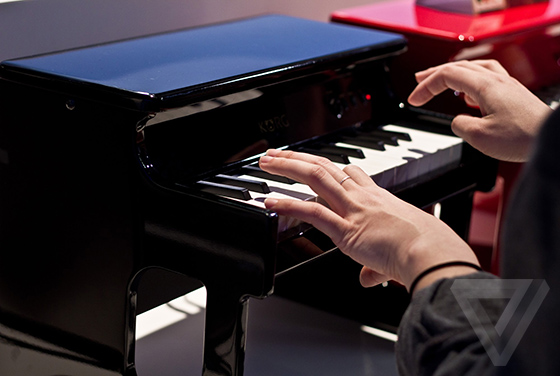 It's unclear what sort of retailers will carry the tinyPIANO when it ships next month for around $250. Sure, it comes in baby-girl pink and can run on six AA batteries, but it still feels too much like a real synth for it to play properly with the Toys "R" Us crowd. As a real-ass Korg, it might not be too crazy to see this thing wind up in a newly formed kid's korner at Sam Ash or Guitar Center. No matter where they find it, something tells me nerdy parents of spoiled children will be lining up Tickle Me Elmo-style for this hot little piece of kit come next Black Friday.