This watch puts beautifully rotating planets on your wrist

This watch puts beautifully rotating planets on your wrist

You can now have that solar system diorama you made in school on your wrist in the form of a watch. Van Cleef & Arpel have debuted a gorgeous new astronomical watch, the 44mm Midnight Planétarium, at Geneva's annual Salon International de la Haute Horlogerie. The watch shows both numerical time and the rotation of five planets — Mercury, Venus, Earth, Mars, Jupiter, and Saturn — visible from Earth. Each planet is represented by precious and semi-precious stones, which rotate around the sun (a stone in the center) in the amount of time it takes for the actual planet to make a rotation. You'll easily be able to see a full rotation of Mercury every 88 days and Venus every 224 days, but it'll take a while to see a full rotation of Saturn — 29 years to be exact.

The watch makes telling regular time easy and whimsical, using a shooting star on the outermost area of the face. In addition to the rotating planets, the "Lucky Day" feature adds another layer of luxury and fancy: use the bezel to select any special day of the year to be your Lucky Day, and the Earth will fall underneath the painted star on the watch's crystal on that day every year. 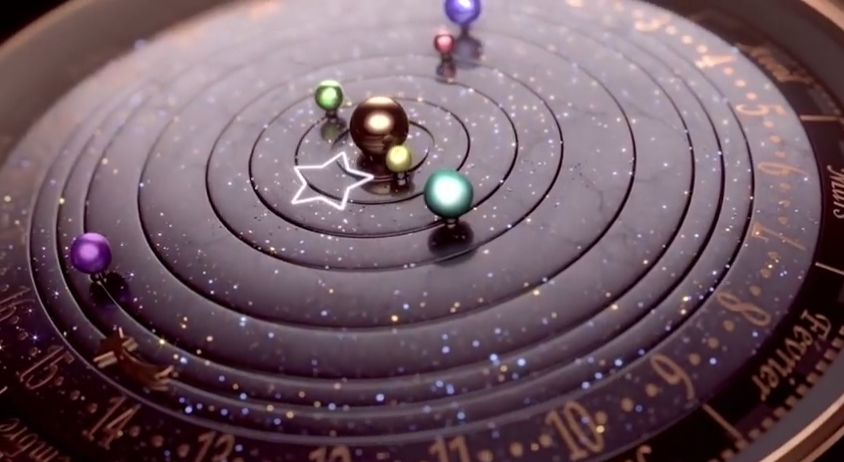 It will take years to see every planet complete one rotation

Midnight Planétarium is a testament to Van Cleef & Arpel's legacy of making watches with stunning, playful displays, as well as Dutch boutique designer Christiaan van der Klaauw's astronomic prowess. Van Cleef's master watchmaker Denis Giguet told Cool Hunting that the biggest challenge was making the planets rotate correctly, and doing it in such a small, thin frame. Van der Klaauw's expertise in astronomic design made him a wise partner for the company, which wanted a special watch to add to its Poetic Astronomy series. While it looks like a fanciful tool out of Harry Potter's world, the watch is a kind of ridiculous beauty that warrants the $245,000 price tag, and that will be striking every time someone looks at it.