As of 2012, UK spy agency GCHQ was apparently collecting mass amounts of internet data in order to tell what people like on Facebook. In conjunction with Glenn Greenwald, NBC has released documents detailing how GCHQ collected data on YouTube video views, Facebook "Likes," and visits to Blogspot, likely by tapping fiber optic cables. Leaks earlier today indicated that the NSA and GCHQ quietly pulled data from insecure smartphone apps to access address books, device IDs, user profiles, and other personal information, but this program — referred to as Squeaky Dolphin — is apparently an analytics system that could be used to give broader context to individual investigations or let agencies put out propaganda. "Not interested in individuals just broad trends!" reads one note. 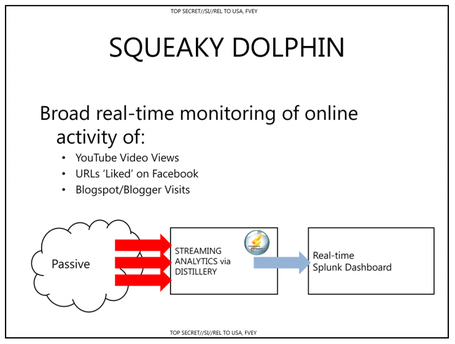 The exact context of the report isn't clear. A slide deck combines information about Squeaky Dolphin with a scattershot primer on psychology, including an image macro illustrating "Psychlolgy 101" and a guide to the personality types associated with web browsers. The deck then shows a dashboard that can sort out social media information by city or topic; an earlier slide from 2010 describes using information operations to "deliver messages and multimedia content across Web 2.0" and for "crafting messaging campaigns to go 'viral.'" References to "optimizing influence" and building influence webs hint at the program's applications: one document from 2010 talks about gathering unencrypted data from Twitter and using it to target propaganda.

Facebook told NBC that its "Like" data was likewise unencrypted, though the company denies knowing anything about GCHQ using it, but both it and Twitter say they've added encryption since 2012. Much of this social media information doesn't seem to be particularly difficult to obtain: it's one of the problems inherent in using giant online hubs, where the issue is the sheer scale of the collection and what it can reveal. Leaving Squeaky Dolphin aside, the leak is a look at how deep the intelligence community's scanning of the internet goes, even when it's not looking for private communications.