Imgur has slowly but steadily been adding a host of features over the last year or so. After making a big move to become the YouTube of viral images, the company built new Android and iPhone apps as well as a full-on meme generator — and its latest new feature could resonate equally with hardcore Imgur users as well as those who advertise on the site. Today, Imgur is launching a full-fledged analytics program that'll let Imgur users track exactly how many people are viewing their images and "Pro" users can see which sites on the internet are linking to their images.

"The new feature will let you reconstruct the story behind the image."

"We've always displayed the total amount of view that the image gets," CEO and founder Alan Schaaf tells The Verge, "but currently you don't really know anything about those views. Where are they coming from, what's the top referrer? All you have is that one number." Now, Imgur will offer a rich set of analytics including a breakdown of daily and hourly image views and a full list of the websites that are linking back to the original image. Those referring websites are ranked by the number of views each is contributing to the image, and you can drill deep into each referring site to see exactly where the photo is being shared (across any number of sub-Reddits, for example). 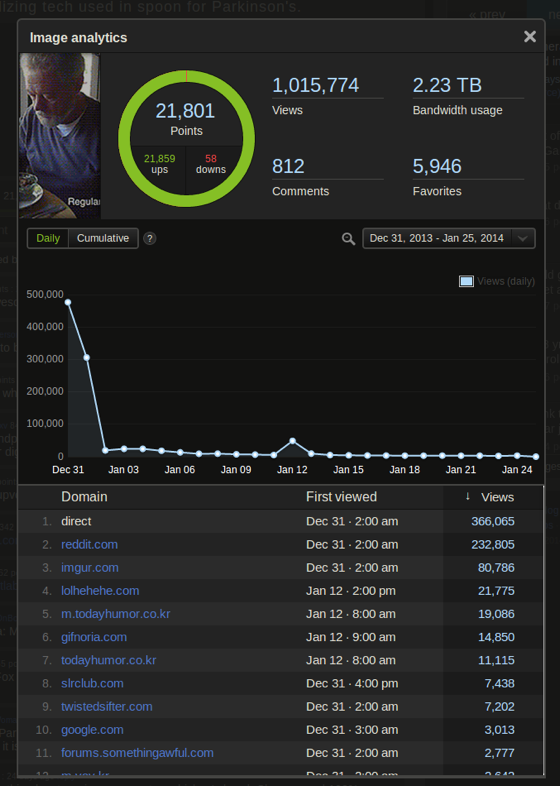 "The new feature will let you reconstruct the story behind the image — you can really see what is happening with your image and be able to tell where on the web it actually went viral," Schaaf says. And Imgur is hoping to get this data out to its users as quickly as possible — Schaaf says the company gets data logs every 15 minutes and will try to get the analytics out to users within the hour.

While Imgur believes that its users will enjoy watching their images spread across the internet, there's no doubt this new platform is also meant to appeal to advertisers who can purchase sponsored images in the gallery — it'll give advertisers a clearer look at whether their sponsored image is catching on and where it gains traction. "We're hoping that this is extremely valuable to [advertisers], because they'll be able to really tell in detail if people are hotlinking the image into their blog or putting it on Facebook," says Schaaf, "and we can tell them exactly when it hit Facebook and how many views from Facebook it got."

Imgur is still happy to provide a free service that anyone can use without an account, but the full range of analytics will only be available to those who have a $23 annual Imgur Pro subscription. Anyone, even those without an account, will be able to get the views-over-time graph, while registered users will get a "scrambled" version of referring site traffic. "You're not really sure what [sites are] on top and what's on the bottom," says Schaaf. "It's more of a small snapshot of what happened to your image."

The new analytics will be a nice feature for advertisers and paid users alike, but Schaff says the company is going to keep focusing on its huge customer base — the company says it has doubled the 60 million unique monthly visitors it reported a year ago and is currently seeing 4.5 billion page views every month. Many of those visitors aren't paying, or even registered, but it's not something that troubles Imgur. "I guess one mentality is that not having people register is a really stupid business plan because then you don't know anything about anyone who's using your platform," Schaaf admits. "But on the other hand, from a user's perspective — which is really what we're focusing on — it's phenomenal. We're the biggest host that lets you upload anonymously."