All in an update: Inside app aims to be the perfect mobile newspaper

All in an update: Inside app aims to be the perfect mobile newspaper

The market for news reading on your smartphone is getting crowded. There are excellent, immersive, highly customizable apps like Flipboard and Feedly, more curated options like Yahoo News Digest, Circa, and Slashdot founder CmdrTaco’s Trove — and that’s not even mentioning the full-on firehose of news that is Twitter. Investor, entrepreneur, and blogger Jason Calacanis believes that no one has yet solved the basic problem: an app that truly brings the news into a mobile-first format. But he says his new app Inside, which launches on iPhone, BlackBerry and the mobile web, is the first to crack that problem.

Calacanis has been keeping his eye on the state of internet news for a long time. He’s the co-founder of Weblogs, Inc., a group of sites that included Engadget, Joystiq, and Autoblog, which was sold to Aol in 2005. But Inside isn’t a competitor to Aol’s network of sites or the many other places to get news online. Instead, Calacanis is trying to build the best way for news junkies to sift through a customized feed of stories they care about on their smartphones.

"Inside has a mission of building the world's best news product," Calacanis told The Verge, "but we don't want to do any journalism." It’s a rather audacious goal, but Calacanis thinks he has cracked it by "making a new unit of content that was designed for the smartphone." That "new unit of content," which Calacanis calls "the update," is a paragraph that boils the news down to its most essential parts. Inside’s updates are 300 characters (about 40 words) and focus entirely on the facts of the story (Calacanis says the goal is to have 10 facts in each update). Headlines and images are part of the update, and the headline is built to flow right into the main text.

"We studied what people would want [to read] when they were in line at Starbucks, or walking down the block."

And instead of having machines make stories human-readable, Inside has dozens of writers looking for the best content on the internet and re-writing those stories into updates for the apps. "We have curators, which are college-educated, English-speaking Americans go out, read the best journalism in the world, and we summarize it and categorize it," Calacanis says. The limitations of an update mean that, like a tweet, you’re not exactly reading well-crafted prose most of the time, but Calacanis isn’t worried about that. "We studied what people would want when they were in line at Starbucks, or walking down the block," he says, and anyone who wants to read the full story can just tap through to the original source. 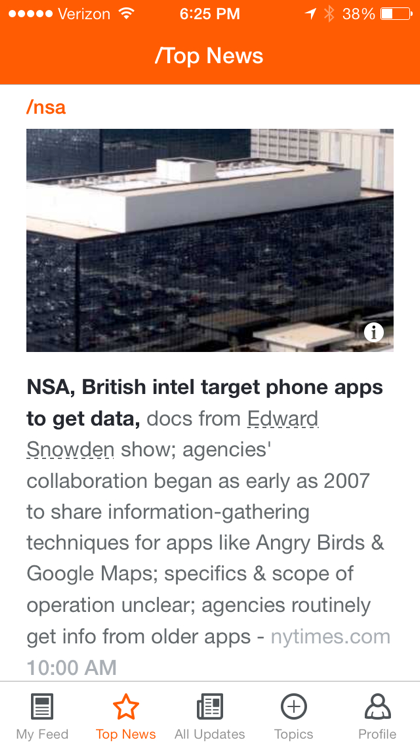 The flood of news the app pushes out is somewhat daunting — Inside publishes about 1,000 updates every day across a huge swath of categories. Calacanis told us that Inside has been pushing out 24-hour coverage for over three months in its private beta, and "people get really addicted to it." But Inside can also tailor the news you receive based on your own interests and browsing patterns, as well.

In addition to the main feed, there’s a custom stream curated for you. Each Inside update is tagged with up to three topics — there are high-level categories like "tech" and "politics" and also more granular sub-categories like "Apple" or "Barack Obama." "We have a TV category, but we also have a *Breaking Bad* and *Game of Thrones* topic, so you can really drill down deep," Calacanis explains.

Will Inside's algorithm help it outsmart its competitors?

Readers can give topics a thumbs up to see more stories like it in their feed, or a thumbs down to ignore similar stories in the future. (There’s also the option to scroll through Inside’s huge list of topics and explicitly add them to your lineup.) This algorithm is the app’s secret to making the news flow manageable — "it’s looking semantically at what’s in the stories you like and helps customize the My Feed section," Calacanis says. Of course, most of Inside’s competitors have developed algorithms of their own, and none have really broken out of the pack — and it’s unclear that Inside’s algorithm is meaningfully different from its many rivals.

Beyond the never-ending scroll of stories, users can drill into a category by swiping across the image at the top of the story. By swiping from right to left, you’ll go back in time and see other stories that are tagged in the category, a feature that Calacanis thinks will be particularly useful on breaking news stories where updates are coming in quickly (or when following along with live events like the Grammys). Lastly, Inside features a "top news" section that features 25 stories every day picked by Chief Content Officer and Gabriel Synder (formerly of The Wire, The New York Observer, and Variety). 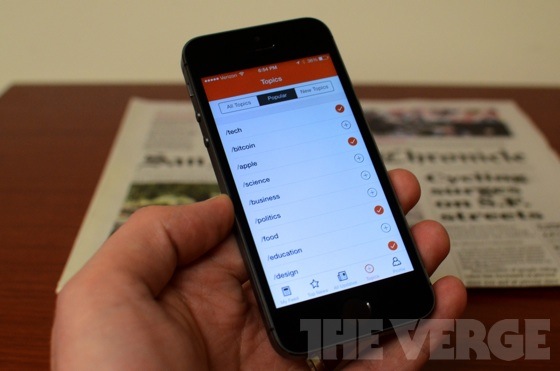 All together, it seems like a comprehensive package for news junkies, and the app will soon be available on more platforms than just iPhone and Blackberry — iPad and Android apps are in the works. (It will "probably" land on Windows Phone, as well.) But the question is whether the average user who relies on Twitter, Flipboard or more mainstream news sites will find Inside indispensable. That user will need to take the time to tailor their feed to the things they care about — but if they do, Calacanis believes they’ll be exposed to a lot of great journalism.

"We think that really the big problem today is not that there's not enough journalism, it's that it's competing against so much noise," Calacanis says. He noted that there are lots sites "who will make five or six stories out of one great New York Times article. Those stories that they do aren't providing a ton of value." It’s a bit of a shot across the bow at blogging culture — despite the fact that Inside is doing a form of reblogging itself.

"We want to be the starting point for people's news discovery."

But Calacanis insists that he wants to point people towards the best writing on the internet that his team can find. "We want to be the starting point for people's news discovery," he says. "If we can get a couple million people using this as where they start, we help them discover the best stuff." It’s a lofty, aspirational goal, but it could also be in conflict with Inside’s core functionality. If lots of users click through from Inside to the source articles, it might mean they’re interested in getting more detail — but it might also mean that the summaries aren’t telling the story effectively. But if the summaries are *too* effective at communicating the news, users might not end up sending these sources many eyeballs.

It’ll be a fine line for Inside to walk — if the app doesn’t send viewers to the sources, those sources might be less inclined to have their content featured on the app. "I think it's always possible people will respond and say ‘oh my god, you're summarizing our story,’ but I think what they'll learn is we're rewarding them by sending traffic and not competing with them," Calacanis reiterates. "We want to be the place where people decide what to read, not the place the place where they read."