BlackBerry announced the launch of the latest version of its BlackBerry 10 operating system today. Version 10.2.1, which will be delivered to all BlackBerry 10 device users starting today, includes a number of enhancements over 10.2, such as a new incoming call screen, better management of the BlackBerry hub for notifications, and support for group messages over email or SMS. The lock screen features a new picture passcode system and actionable notifications, and the update offers improved battery reporting and an offline reading mode in the web browser. The update also enables the FM radio function in the BlackBerry Q5, Q10, and Z30 smartphones.

BlackBerry says that the update will be pushed to all BlackBerry 10 devices around the world starting today, but that it is still subject to carrier approvals. It's not exactly clear when users in the US will see the update — most US carriers have yet to release BlackBerry 10.2, leaving many users stuck on BlackBerry 10.1 — but CrackBerry reports that the update has already arrived for a limited number of Verizon subscribers.

Update: We've successfully installed the update on a BlackBerry Z10 and are able to directly install Android apps to the phone without having to go through the conversion process required with earlier versions of the OS. We were able to get Instagram installed without issues, but Google apps such as Gmail and Chrome do not seem to work as well. 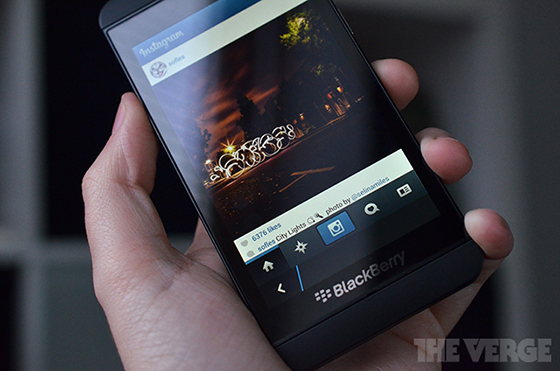