A new suit makes all the difference

It’s hard to imagine, but the best smartwatch you can buy isn’t from Apple, or Google, or Microsoft, or Samsung.

It’s from tiny Pebble, a hardware startup that so captured the hearts and minds of gadget fans in 2012 that it shattered Kickstarter records on its way to millions in crowdsourced funding. The first Pebble watch, released almost exactly a year ago, finally made the smartwatch accessible to regular people. At $150, it’s almost cheap, it works, and it doesn’t try to do too much: it flashes notifications about texts and emails and phone calls from your smartphone, and if you’re feeling particularly saucy you could control music playback on your wrist. Compared to wildly ambitious but unfocused competitors like the Samsung Galaxy Gear and the Metawatch, the Pebble is an object lesson in doing more with less.

There’s only one problem: it’s kind of ugly.

The new Pebble Steel changes that. For $249 you get virtually the same internals as the original Pebble inside a tighter, smaller metal case that comes with metal and leather bands. There’s also an all-new app for iOS and Android, and a new Pebble app store that makes customizing your watch easier than ever. The little company at the front of the wearable market is pushing forward with design and software while it still has the lead — but the big question is whether it can move fast enough to keep ahead.

"Isn't elegance forgetting what one is wearing?" 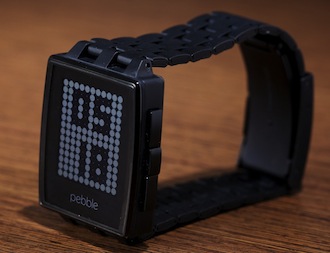 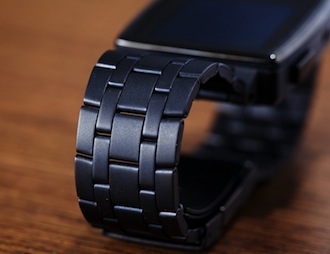 The Pebble Steel still isn’t designer-watch-beautiful, but it’s so much nicer than the original it’s almost a little shocking. Throw it in a glass case full of Fossils at Macy’s and it would fit right in; it doesn’t scream "smartwatch!" the way the original Pebble or Galaxy Gear do. I happen to like bigger watches, and the Steel is actually slightly smaller than my two daily timepieces. And while it’s heavier than the original Pebble, the Steel is still lighter than my fanciest watch and a co-worker’s Seiko Kinetic. Apart from the case, most everything is the same as the original: the same low-res transflective display that’s a little too blue when the backlight is on, the same button layout, the same general responsiveness and interface. It’s a Pebble in a much nicer case.

Pebble did make two changes from the original I’m not crazy about: the power connector has been subtly changed so you can’t use the same cord as the original if you have one, and the watch band is now a much less-common "toothed" design. Being able to use basically any random 22mm watch band was a big selling point of the original Pebble, and I don’t know why the company gave it up. I have a theory, though: the design is open-source and the company sees a lucrative accessory market in the works. I’m sure the options will be there, but I’m not happy about losing the easy customizability just so Pebble can take a cut.

All in all, though, I would definitely wear the Pebble every day — a huge achievement I can’t say about any other wearable product I’ve tried in the past year or so. It feels like a regular watch with added functionality, not a "wearable" that’s trying to convince me to change my entire life around. 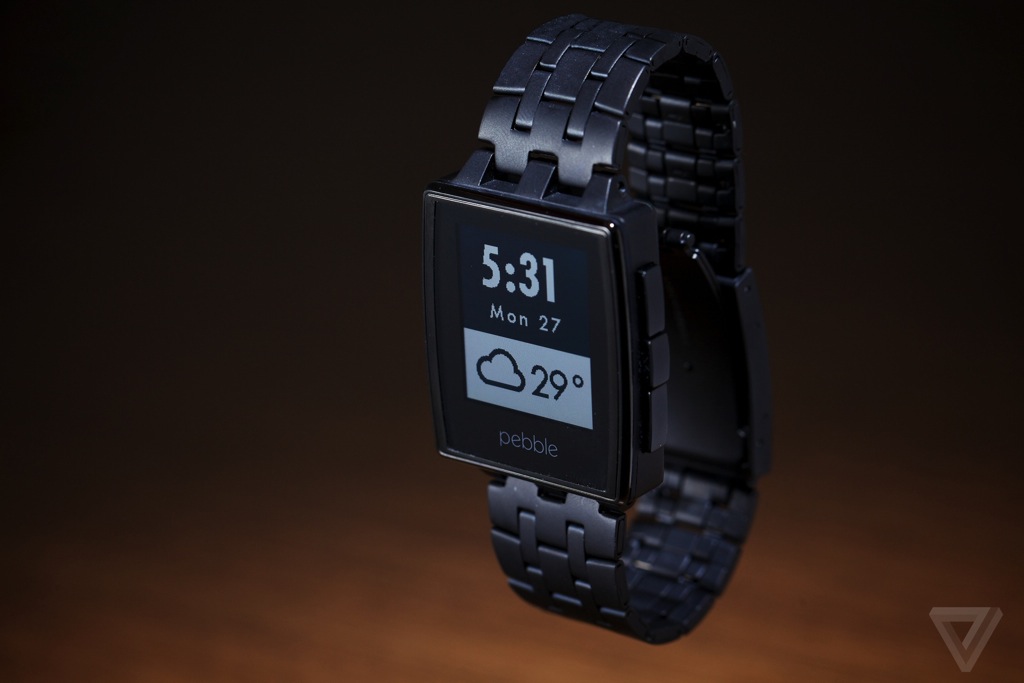 The other big pieces of the Pebble Steel puzzle are the updated Android and iOS apps and the new app store. I wasn’t able to try the Android app since it isn’t ready yet, but the new iOS app is far superior to the original. The app store works well — you can quickly find new apps and watch faces and send them to the Pebble, where they’re listed at the bottom of the main menu.

"My attitude is if fashion says it's forbidden, I'm going to do it." 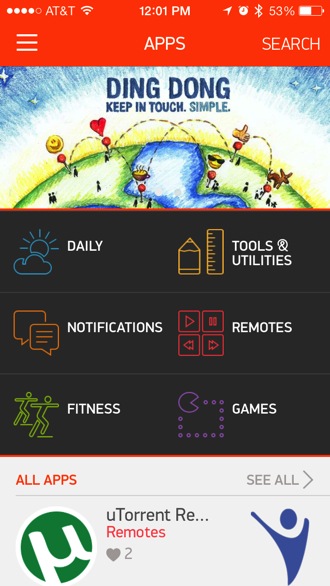 There are eight open slots for third-party apps on the Pebble, and when you remove things from the watch they go into a "locker" in the phone app; swapping things around just takes a few taps. It’s not a perfect system — most of the coolest Pebble tricks like remote camera operation require their own companion apps on your phone — but it’s simple, it makes sense, and it works. (And it will all work with the original Pebble as well.)

Pebble’s launching the new app store with a bunch of independent developers and a handful of flashy launch apps: I was able to try apps from Foursquare, Yelp, and ESPN. The results were mixed: checking into Foursquare from my wrist is definitely a little piece of the future, but pressing buttons eight to ten times while squinting at a low-res black and white display feels like a big piece of the past. I have no idea why I’d look for a bar on Yelp using the Pebble instead of my phone, but the idea is certainly nice. And the ESPN app can show you scores, but there you are, clicking away at your wrist again.

What I really want is for these Pebble apps to be predictively interactive — to know I’ve walked into a new restaurant and have the Foursquare screen ready when I bring my wrist up. To know that the game is on and that it should cycle to ESPN information more regularly. To know that I’m near a restaurant my friends have liked in the past and pop up directions. To know that I’ll probably respond to a text with "be there in five!" even though everyone knows I’m not getting anywhere for at least another hour. I don’t feel guilt when the lies are easy.

The value of the Pebble is that it can provide information in a much faster, less disruptive manner than a phone; trying to give it the same functionality as a phone seems like a step in the wrong direction. Pebble’s great strength is that notifications work so well; the next step should be taking common actions and putting them a glance and a discreet tap of the wrist away, not adding another computer to your body. You’ve already got one of those in your pocket. 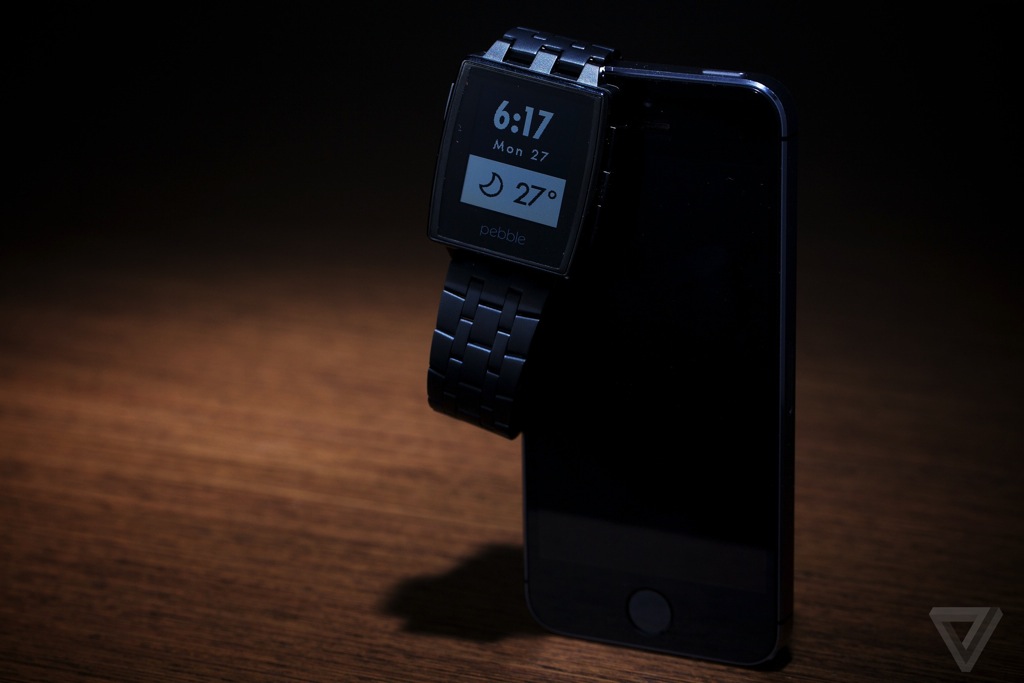 Realizing that potential isn’t just up to Pebble, though. As an extension of your phone, it’s also naturally an extension of your phone’s operating system. On Android, where anything goes, people have already written all manner of apps and utilities that extend the Pebble experience in strange and interesting ways. Responding to a text or email with quick canned responses from your wrist is possible if your Pebble is connected to an Android phone, provided you take the time to find the right apps and set it all up.

"A respectable appearance is sufficient to make people more interested in your soul."

But those things are locked away on iOS, tucked behind Apple’s tight control of its platform. The basics of using a Pebble are better than ever with iOS 7, which now natively supports sending notifications to Bluetooth devices; basically anything that pops up on the lock screen appears on your wrist. If you have a lot of apps that notify you, it can be a flood: I got notifications from Trello, HipChat, Google Hangouts, iMessage, and Gmail all in one five-minute period. Managing all of this is a lot easier on Android, but there’s no such facility on Apple’s platform. It’s all or nothing, unless you’re willing to turn off your phone notifications as well. And Pebble simply has no ability to add features like replying to texts or emails until Apple decides those features are worth it. Pebble’s software ideas are great, but the challenge is figuring out ways to extend its platform beyond super-obvious things like iMessage replies that will require Apple’s help. I’m not sure this new app store will accomplish that task all the way, but it’s a solid beginning. 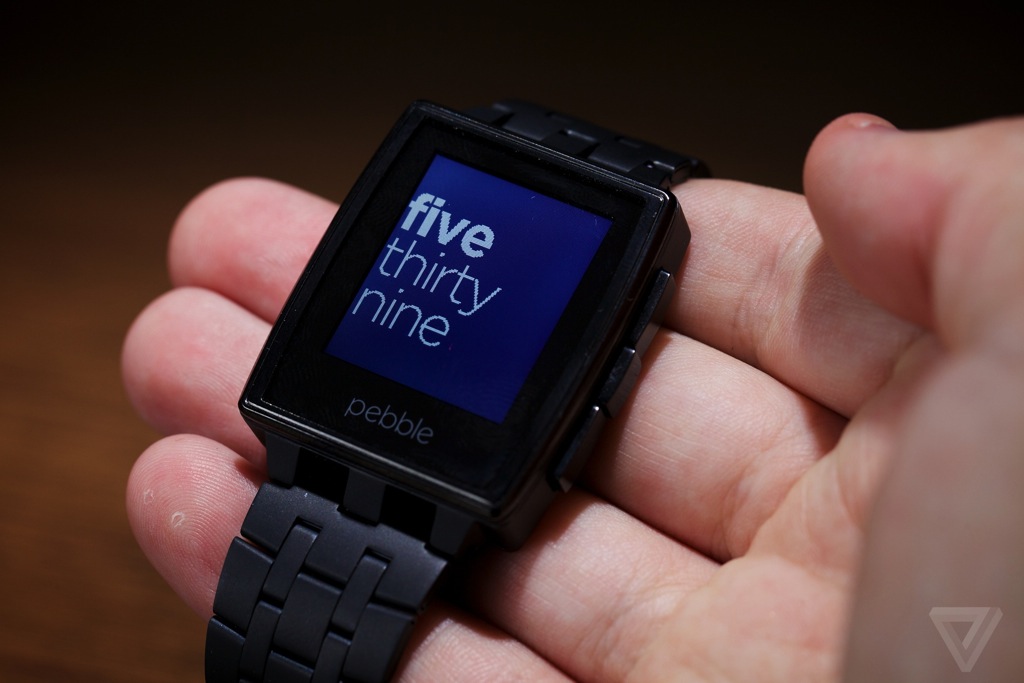 The entire time I’ve been wearing the Pebble Steel, I’ve been thinking about the original Palm Pilot, which was the first really popular mobile computer when it launched in 1996. It wasn’t the most advanced or the most capable device available, but it was the most focused and accessible. The display was black and white and low resolution, but it quickly presented the information you needed the most without a lot of fuss. It wasn’t beautiful, but it was handsome. That first Pilot created the original market for mobile computing by doing less just as others were trying to do too much.

And the entire company disappeared within five years of Apple introducing the iPhone in 2007.

That’s the risk for Pebble and every other would-be king of the suddenly hot wearable market — that platform owners like Apple and Google and Microsoft will be able to build true extensions of their operating systems instead of connecting your wrist to your pocket with baling wire and Bluetooth. It’s a danger that might still be years away, but it’s a danger Pebble needs to face head-on: the next goal for Pebble is to go take the Pebble Steel from the best smartwatch you can buy right now to the best smartwatch, period. That’s a tall order, but if the next jump is as big as the jump from the Pebble to the Pebble Steel, the company might just be moving fast enough.

If you’re in the market for a smartwatch right now, you should buy a Pebble Steel. You’re also probably the sort of person who would have bought a Palm Pilot 1000 — and just like that Pilot was an early glimpse at the mobile-computing revolution, it feels like the Pebble Steel is a sneak peek at a coming wearable explosion.