The big issues: what to watch for in Obama's State of the Union

Share All sharing options for: The big issues: what to watch for in Obama's State of the Union

Tonight at 9PM EST, President Barack Obama will give his fifth State of the Union address, followed on January 31st by a "Hangout Road Trip" where he’ll answer questions from a handful of citizens across the country. Even though the text of the speech is still under wraps, White House officials and insiders have given us a preview of the big issues the president will cover. White House senior advisor Dan Pfeiffer described the thrust of the address as "opportunity, action, and optimism," promising that Obama will "lay out a set of real, concrete, practical proposals to grow the economy, strengthen the middle class, and empower all who hope to join it." While the speech is expected to focus particularly on income inequality, a lot of other threads from past years need to be tugged into 2014.

The State of the Union won’t precisely be a turning point or a fresh start for Obama, but it will tell us where the White House will be focusing its efforts in the coming year, and where it will put pressure on Congress. It’s also a chance for the Democratic White House and GOP — which will respond with a speech by Representative Cathy McMorris Rodgers (R-WA) — to compete for credibility and attention. Like last year, a State of the Union hub will feature an "enhanced" version of the address with charts and data backing up Obama’s claims. And even if we haven’t seen a dubstep trailer yet, the White House is still making every effort to show its pop culture savvy: it’s following up tomorrow with a West Wing-inspired "Big Block of Cheese Day," where senior advisors will answer questions posted to Twitter, Vine, Instagram, Google+, and Facebook.

Healthcare.gov's partial recovery could be presented as a success story

Obama’s proposals today are supposed to lean heavily on executive orders that let him bypass a deadlocked Congress. "The president is going to exercise his authority," said press secretary Jay Carney in a press briefing. "He’s going to use his pen and his phone to advance an agenda that is focused squarely on expanding opportunity." Last year, Obama introduced a cybersecurity executive order, which Congress followed up by reintroducing the hugely controversial but long-stalled CISPA bill. He also promised action on environmental regulations, saying that if Congress didn’t act, he would: nine months later, the EPA announced tighter pollution restrictions for newly built coal plants. Today, the White House has already announced an executive order raising the minimum wage for federal contractors to $10.10 an hour, following up on a promise from last year’s State of the Union. While these executive orders can move Obama’s policies forward, they can’t go as far as an actual bill would, and Congress will still end up shaping much of the agenda he presents tonight — if it gets around to passing any of it at all. 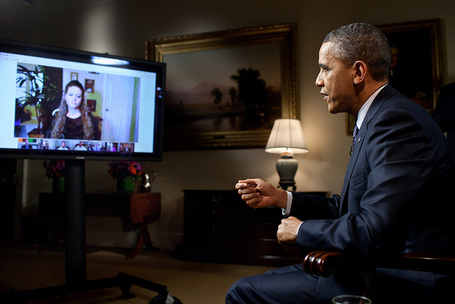 Health care could be a major talking point during the address, with Obama framing the rocky launch and recent reform of the Healthcare.gov insurance market, which was unveiled in October to massive user overload and immediate technical problems, as a provisional victory. The site has come a long way: as of December, it was working for 80 percent of users, with 2.1 million enrollments counted by the end of the year. That’s still far below its target of 3.3 million, though, and the White House is still looking for ways to guarantee the system won’t relapse, having ditched the contractor who originally designed it and extended the signup deadline for people with pre-existing conditions from January 31st to March 15th.

Obama has already laid out reforms for NSA surveillance

One of the most contentious topics of the new year has been surveillance reform, both inside and outside the US, but new developments seem unlikely. Obama already laid out a set of proposed changes in a speech earlier this month, promising to add more limits to the NSA’s phone record collection and scrutinize its decisions more carefully. Unfortunately for him, that hasn’t stemmed the tide of new information from Edward Snowden’s stash of documents. Like last year, we’ll probably at least see a short mention of balancing national security and civil liberties, with the possibility of more specific details as part of his statements on foreign policy. But either way, we’re going to be waiting until the end of March for the intelligence community to issue its response to his plan.

Net neutrality was one of Obama’s original campaign promises, but a court ruled that the policies his FCC established were unenforceable in mid-January. Obama has promised he’s committed to working with the agency, private companies, and Congress to preserve the "free and open internet," but as far as we know he and the FCC are both still weighing their options, with the commission's chair, Tom Wheeler, suggesting he’ll use the limited authority that the court gave him rather than push for larger structural changes.

A return to Detroit

Rhetorically, we’ll probably see a return to one of last year’s themes: a modern-day technological renaissance that will capture the drive and optimism of the Space Race and revitalize a stagnant American industrial sector. Tim Cook was invited to the First Lady’s booth in 2013, and Apple was name-checked along with research on the human genome and 3D printing. This year, Michelle Obama has invited Andra Rush, founder of Detroit Manufacturing Systems — a company that started producing car interior parts in 2012 and is described as the "largest new manufacturing employer" that the city has seen in decades. Mary Barra, who was named as GM’s CEO last month and is the first woman to lead a global automotive company, will also be in attendance. Both women symbolize a possible new era for Detroit, which filed for bankruptcy in mid-2013. More whimsically, the Obamas invited 16-year-old Joey Hudy, a self-described "maker" who entered an air-powered marshmallow cannon in the 2012 White House Science Fair and is now an Intel intern.

More orders could be revealed throughout the day, and a few of the First Lady’s guests, chosen to represent a broad spectrum of issues and events from 2013, have yet to be announced. We’ll be watching for any new developments tonight, as well as over the next few days as Congress responds to the president’s proposals.