Monitoring how long a user sleeps is an increasingly common feature in activity trackers, but Basis is upping the ante with a new suite of advanced analytics that can actually break down the phases of sleep users experience over the course of the night. On top of the usual metrics of hours slept and number of times interrupted, Basis bands will soon be able to track whether users are in a state of light, deep, or REM sleep — the phase most often associated with dreaming.

"We're getting at real physiological signals."

Since its launch, one of the standout features of the Basis B1 has been its ability to recognize when a user was sleeping without the clunky button presses required with a Fitbit or Jawbone Up24. The key to that trick is the device's array of sensors, which allow it to determine when a user is sleeping. It's that same trove of data Basis is using for the new sleep analytics. Along with an accelerometer, Basis bands have sensors that measure heart rate, skin temperature, and the amount of perspiration on your skin at a given time. "We're getting at real physiological signals," says Basis CEO Jef Holove, which provide the company's algorithms the data they need to track the body with particular nuance. In the case of the improved sleep-tracking features, Holove says Basis partnered with the University of California, San Francisco and the Northern California Institute of Research and Education to test and validate its algorithms across a variety of individuals. 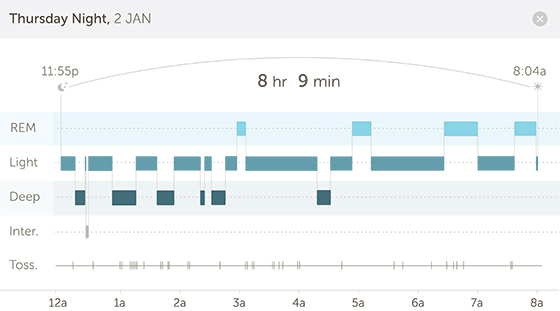 The new sleep analytics package is coming to existing Basis B1 fitness bands on January 21st, alongside an upgraded version of the Basis website and mobile apps. Of course, while raw data on its own may be interesting, it's not terribly useful, so the new apps will also provide context for the added features. A Basis-calculated "personal sleep score" will let users track the overall quality of their sleep over time, as well as letting them know if they're not getting enough of a particular type of sleep; a lack of REM sleep is associated with poor memory performance, for example.

For existing users and new customers

But while the new features are coming to existing users, Basis is also releasing an updated model of the fitness band dubbed the 2014 Carbon Steel Edition. The new model features some subtle internal refinements to the device that Basis says make it more rugged and waterproof, and also comes with a more flexible strap with silver accents. The new model is available now through the Basis website for $199 and will soon be available on Amazon; it's also coming to some Best Buy stores on February 2nd. For those looking for a slightly cheaper option with the same sleep-tracking features, the original Basis B1 band is receiving a price drop down to $179. Basis will be showing off the new model and updated features next week at CES — and we'll be there to give you our impressions.