Lord Norman Foster, renowned architect and founder of Foster + Partners, has proposed a massive network of elevated pathways for cyclists in London. Dubbed 'SkyCycle,' the cycling routes would follow London's vast suburban rail network for over 220 kilometers (136 miles), allowing cyclists to traverse the UK's capital without encountering cars or pedestrians.

SkyCycle would consist of a number of routes, most of which would connect with other lines at points. Each route would be able to accommodate 12,000 cyclists per hour. The network as a whole would serve almost six million people, half of whom live and work within 10 minutes of one of its 200 entrances. As the majority of London's rail network was created in the steam era, the tracks follow the path of least resistance, avoiding steep gradients and making them ideal routes for cycling. 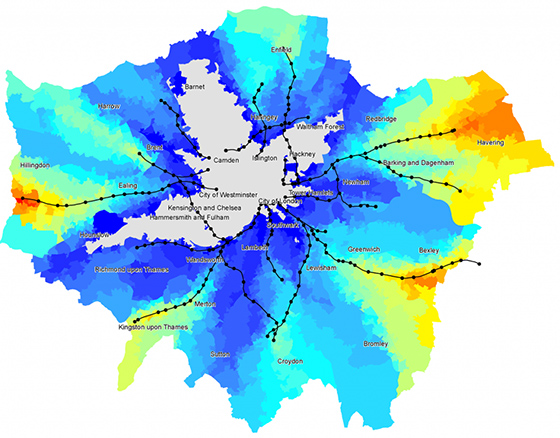 Reminiscent of the California Cycleway

The project is reminiscent of the California Cycleway, an ill-fated plan to connect Los Angeles and Pasadena with a very similar elevated cycle path. Despite a partial opening in 1900, the Cycleway was never completed, as commuters flocked to take the Pacific Electric Railway instead. Now, a railway could enable Londoners to live the Californian dream over a century later.

Cited benefits of the plan, aside from reducing cycle collisions with cars, include raising historically low values of properties situated by the railways, the possibility of on-network "cycling high streets" with shops and cafés, and the "integration of automated goods delivery networks." For now, though, SkyCycle is a pipe dream. It's been presented to various bodies in charge of London's transport system, and will continue to be developed by Foster and its partners on the project, consultancy firm Space Syntax and London based architects Exterior Architecture, which unveiled an early plan for SkyCycle in 2012. There's no timeframe for turning SkyCycle from concept to reality, but given the scale of the proposals, it's likely to take decades rather than years.