The consumer electronics industry will converge at CES next week to unveil a deluge of new products and technologies, but that isn't stopping some of more recognizable names from getting their announcements out there early. Acer is one of those, and today it's announcing an update and a price reduction for its Iconia A1 Android tablet, an iPad mini-sized competitor at a far lower price. CES isn't short on low-cost devices like the A1, but Acer's bringing something a little bit different to help it stand out: one of Intel's Atom processors. 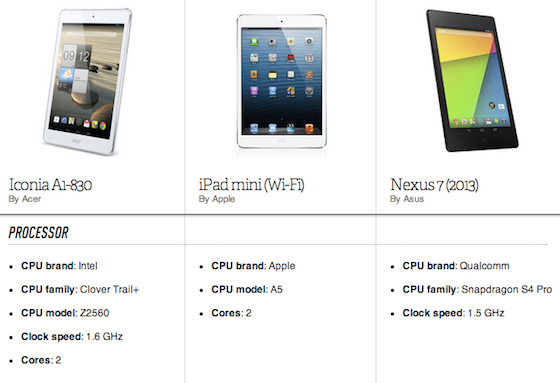 Click above for full specs on all three tablets.

Intel processors are hard to come by on Android

Though Intel has gone out of its way to make processors that work with Android, finding devices that put them to use that way is still a rarity. Unfortunately, Acer is using a Clover Trail+ processor — not one of Intel's newer and far more powerful Bay Trail processors — but it's still an interesting alternative in a sea of low-cost tablets using no-name solutions. What exactly it'll do for the tablet's performance isn't immediately obvious, but you won't want to count it out like you might other processors used by low-cost tablets.

That said, there have been impressive gains between Clover Trail and Bay Trail, and anyone used to top-of-the-line devices will certainly notice the difference. But at $149, the question is how much of a difference you're willing to accept.

While it's ostensibly an iPad competitor — thanks to its 7.9-inch, 4:3 display and near-identical style — the A1's low price and Android OS make it sit fairly close to the Nexus 7 as well. Both of those tablets outclass it in a number of ways, from lighter bodies to longer-lasting batteries, but it isn't a total wash. The A1 has the very same resolution as the original iPad mini, and with 16GB of internal storage and 1GB of RAM, it doesn't fall light on specs like other low-cost options do.

Of course, you're probably not debating between a $299 iPad and a $149 Iconia A1 — they're still going to be far different experiences, even if the A1 feels a lot like it. Acer's going after the customers who want a bargain, and probably want it on Android. Though $80 more will get you the Nexus 7, a tablet with a lot more power and a lot more longevity, that's still a large price jump. Without having seen how Intel's processor holds up in the A1 just yet, it's hard to say how long it could last for, but it's an interesting prospect nonetheless.

If the A1 isn't of interest to you, don't worry — there's a lot more to come. You'll be seeing our database fill up fast over the next week. You can always head there to track and see the full specs of announced products, and we'll keep you updated over at our CES hub. For now, here are a few more of the products we'll be seeing at CES next week: