SwiftKey gets its predictive keyboard onto iOS, with a little help from Evernote

SwiftKey gets its predictive keyboard onto iOS, with a little help from Evernote

The popular Android keyboard arrives on iPhone and iPad

Three and a half years after launching on Android, SwiftKey's popular predictive-software keyboard has finally come to iOS. iPhone and iPad users can now get personalized, predictive typing from the company, though there's a catch, and it's a big one: it can only be found in one new note-taking app. Tired of waiting for Apple to open up iOS to other software keyboards, Swiftkey's piggybacking on Evernote with a new app called SwiftKey Note. It gives users a barebones version of the popular note-taking service that includes SwiftKey's predictive text feature to speed up typing.

Swiftkey is piggybacking on Evernote, for now

That keyboard — which leaked in a photo last week — looks identical to Apple's, but it has a bar along the top that adds suggested words as you type. After analyzing notes you've already written and stored on Evernote, along with its own database of phrases, SwiftKey is capable of offering suggestions for what words might come next. And once you're up to speed with how this system works, you can mix everyday pecking with tapping on those words, both of which could be faster than using Apple's everyday keyboard.

But what SwiftKey is giving users out the gate is not quite an Evernote replacement. Instead, it's just a lightweight note-taking client that happens to work with the service. It's also considerably different in functionality than its Android sibling. For instance, one major feature that's missing is Flow, the Swype-like tool that lets you slide your finger from letter to letter in order to string together words, sometimes at great speeds. More than half of SwiftKey's users on Android have the feature enabled, says SwiftKey's chief marketing officer Joe Braidwood, but it's not there in this initial version... at least not yet.

"We want to stay pretty consistent with the experience of iOS. This is not about radically challenging what users are used to," Braidwood says. "We're going to start collecting feedback, and if users want Flow, we'll seriously consider [adding it]."

Also missing are many of the alternate language options, with SwiftKey focusing instead on a few of the major tongues like English, Spanish, and most European languages. Altogether there are just 10, down from Android's 61. Again, it won't be that way forever, Braidwood says, but that's what early users will get. 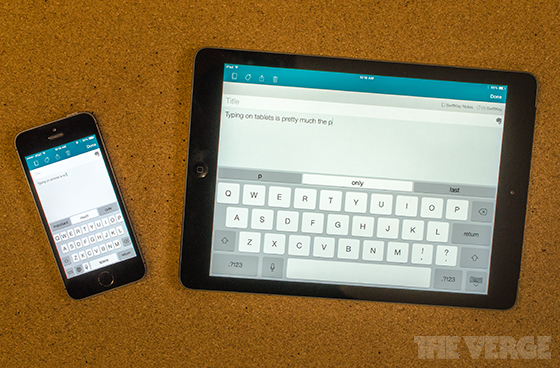 Keyboards continue to be one of the major areas where Google and Apple differ. Both companies were pivotal in moving away from plastic keyboards with tiny keys to on-screen buttons that disappear when they're not needed and can be changed years after a product is released. But where Google's allowed other companies to offer alternatives and for users to choose, Apple's kept it off-limits. One exception is that the company allows app developers to create keyboard add-ons for their own apps, which is exactly what SwiftKey has done here.

Writing can be blazingly fast

But as far as experiences go, users might be hard-pressed to pick this app over Evernote when it comes to anything beyond writing text-based notes, and that's by design. You can't insert media like photos or audio recordings, and more limiting, you can't see existing Evernote content unless it's been tagged with "SwiftKey." The simple explanation, Braidwood says, is that the app's been designed around Evernote's API to create notes but not serve as an outright replacement to Evernote's own app. In other words, it's fast and simple, but also missing all the bells and whistles that can make Evernote so great. Combined these limitations create an experience that is just a tantalizing taste of something Android users take for granted but feels more like a technology demo in the world of iOS apps.

If SwiftKey's plan to get on iOS seems familiar, it's because the company is not alone in trying to build around Apple's limitations. SwiftKey-competitor Fleksy took a markedly different route last month when it launched a way for other app makers to actually include its gesture-based keyboard in their own apps with just a few lines of code.

Braidwood says that's not what's happening here, and if anything, the company could go the opposite direction by adding extra services beyond Evernote, something that could make SwiftKey Note more of a hub for all things typing, much like the stripped down writing app Drafts. In fact, out of the box you can use it without Evernote, though your work will only be saved on your iPhone or iPad and not in the cloud. Braidwood says there's "no reason" other services couldn't be added later on, and that the company just wanted to start with something it knew people were already using.

A hub for all things typing

Apple is unlikely to pay attention to this new effort while deciding what goes into its next version of iOS, but SwiftKey isn't waiting around for that to change, nor is the company betting on any one platform. Braidwood says that SwiftKey has been designed to work on just about any device now, and hopefully more in the future. That's all part of the company's broader goal to be everywhere, and to speed up typing in return for granting access to an increasingly large set of linguistic data.

"We will run on any piece of hardware, within reason," he says. "There's nothing stopping our tech from being embedded in your smart lounge, car, watch, or whatever it is."