Can Lenovo save Motorola?

Can Lenovo save Motorola?

$2.91 billion buys you a storied history and a challenging future

With Google and Samsung developing a closer partnership than ever, this week might not be the best time to try and make inroads in the hypercompetitive Android smartphone business. The Korean company already enjoys a vast lead over its rivals and is now ideally positioned to continue dominating in both the US and abroad. Shrugging off the size of that challenge, Lenovo has decided to buy Motorola Mobility for $2.91 billion and step up its efforts at becoming a smartphone vendor with a truly global reach.

The world’s biggest PC maker today, Lenovo, was anonymous to many until just recently. But in 2005, the Chinese company that only two years earlier had renamed itself from the generic Legend acquired a brand name and cachet that catapulted it to global renown. Lenovo bought IBM’s personal computer business for $1.75 billion, the star jewel of which was the well respected ThinkPad brand. After engendering only blank stares outside of China, the Lenovo name became recognizable almost overnight. There were questions as to whether IBM’s signature quality and durability would be maintained by the less reputed Chinese company, but in order to ask, you had to know its name first.

Now Lenovo wants to recreate that same success in the mobile realm, though it’s by no means a new effort for the company. Lenovo has been a rumored suitor for every major mobile takeover that’s taken place in recent years — from Palm, through Nokia, to a series of dalliances with BlackBerry that were eventually thwarted by the Canadian government stepping in.

If you had $3 billion to spend on brand recognition, would you spend it on Motorola?

That Lenovo was willing to spend billions to hitch a ride on BlackBerry’s setting star shows just how ravenously hungry for brand recognition the Chinese company is. It has the money and production capacity to be a big mobile player, but it’s desperately lacking a popular name to put atop that workshop. As Google’s Larry Page explained in the wake of the deal announcement, "Lenovo has the expertise and track record to scale Motorola Mobility into a major player."

In spite of being known for its PC business, Lenovo actually sells more mobile devices than PCs, with the majority of them going to its home market of China. The task of expanding those sales to other countries, however — particularly the critical developed markets of the US and Western Europe — is not an easy one. Samsung and Apple have secured an enormous lead, which is only being consolidated through extensive retail and marketing networks, meaning that if Lenovo is to find any room it’ll have to be willing to both spend big and make tough decisions.

That may not be great news for anyone eager to see Motorola continue to operate along its current trajectory. The once-troubled mobile maker has revitalized its brand image under Google’s leadership — endearing itself to the American consumer with its Texas assembly plant and aggressive Moto X and G pricing — but it’s also been hemorrhaging money and failing to meet sales expectations. Lenovo now has to choose whether to take a scythe to Motorola’s remaining operations or to keep people employed and extend the "made in America" message and goodwill.

Upheaval at Motorola is inevitable, the question is how much it will hurt

The Chinese company builds some of its ThinkPads in North Carolina, so there’s a clear appreciation of the reputational benefits of employing some of the same consumers you’re trying to sell to, but that doesn’t change the fact that Lenovo already has a thriving mobile business that conflicts with Motorola’s loss-making production. Lenovo CEO Yang Yuanqing, the same savvy leader responsible for the company's renaming in 2003, says no firm plans have yet been made: "We will evaluate what is best for the company [with regard to US manufacturing]. Right now, most of the manufacturing is outsourced. We will be looking at that." 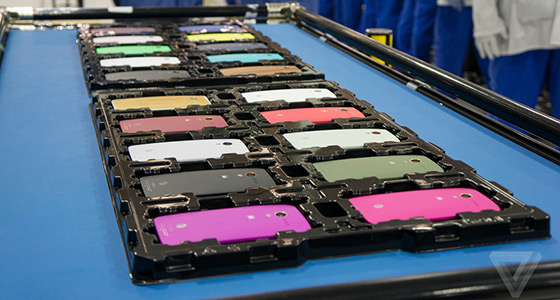 While it is no longer the biggest by volume, the US smartphone market remains the most important. Nokia and Sony have demonstrated how tough it is to be a global phone-maker without a significant presence in American stores. Lenovo is lowering that hurdle with its purchase of Motorola, which is both a homegrown brand and the manufacturer of Verizon’s darling Droid line. In announcing the deal, Lenovo points out that it represents a gain of 50 new carrier relationships for the company, with the good graces of the big US operators like Verizon being the most crucial. It’s also worth noting how often Yuanqing repeated the word "global" in his comments on the Moto acquisition — Lenovo’s goal is to recreate its mobile success in China on an even vaster scale.

Though still cagey on the details of its plans, Lenovo has revealed that it intends to use Motorola’s name in the Americas and maintain its own branding in China. More important to phone buyers, however, will be how this takeover will affect the substance rather than the marketing of future devices. The Google-owned Motorola started delivering Android updates even faster than scheduled, the Moto X is considered one of the best handsets on the market, and the elegantly improved software on Moto’s 2013 phones has been lauded for its cleanliness and efficacy. Would a Lenovo takeover signal a return to torturous update waiting times, broken promises, and bloated software?

Will Android updates be as swift without Google steering the ship?

One reason to keep faith with the Chinese company is its track record. In September, 2012 Lenovo promised to turn its loss-making mobile division to profit within six months and in early 2013 it duly delivered. Then, in the middle of last year, Yuanqing said Lenovo intends to sell phones in the US within a year and he’s now completed a $2.9 billion down payment toward realizing that goal. Still, the temptation to propagate Lenovo’s own UI and software ecosystem — an urge that wasn’t present when Google owned Motorola — could still come to scupper the promising future that the Moto X and G had been harbinging.

When Lenovo took over the ThinkPad line, it didn’t just buy the name. Management of the resulting company was actually handed off to a team of experienced IBM execs, while research and design were also kept up to their earlier standards thanks to the retention of people like Arimasa Naitoh, who’s habitually referred to as the father of the ThinkPad. The same is not true with the Motorola takeover, which excludes the Advanced Technology and Projects team led by former DARPA chief Regina Dugan. Without Moto’s quixotic research arm — responsible for modular phone and electronic tattoo concepts — Lenovo’s not buying much in the way of innovation or forward-thinking design.

It all ultimately comes down to having a name that Americans can trust and invest their dollars in. Lenovo has already proven that it can rejuvenate a well-regarded brand with its ThinkPad acquisition, but it has a much bigger challenge on its hands with Motorola. Sales are poor, operations aren’t profitable, and employee morale must be at an all-time low after two buyouts in less than three years. All Motorola has to offer now is its name and history. And how much is that worth?