NFL Now lets you create your own football channel, and watch it anywhere

Share All sharing options for: NFL Now lets you create your own football channel, and watch it anywhere

New York City has been overrun with Super Bowl talk, and NFL commissioner Roger Goodell took the stage in a hotel in the heart of Times Square to announce the company's newest initiative: NFL Now. It's a personalized video network, he said, with ways for fans to find highlights, analysis, and more — all from the NFL. It will be available on the web, as well as on apps for iOS and Android, plus on Windows and the Xbox One (Microsoft has long been a big partner of the NFL). The service is launching this summer for free (Verizon, Yahoo, and Microsoft are among the launch advertisers), along with a paid premium service called NFL Now Plus.

Essentially, users will pick their favorite teams and name their fantasy players, and then NFL Now will deliver an unending stream of video of exactly what they want to watch. The network has highlights and analysis from the NFL Network, video from the NFL Films archive, and content from the teams themselves — the NFL's big advantage is its access to both the franchises and historical footage, and it's leveraging both for NFL Now. It's like having your own personal SportsCenter, 24 hours a day.

The one thing missing? Live games: Goodell talked a lot about accessible NFL football is, and how easy it is to watch, but NFL Now is clearly intended as a supplementary experience, not a reason to cancel cable. NFL Now isn't nearly the all-encompassing network the WWE launched at CES, but it's at least another way for football fans to get their fix. And judging from the teeming masses on the toboggan run in the heart of a freezing-cold Times Square, that's not such a bad idea. 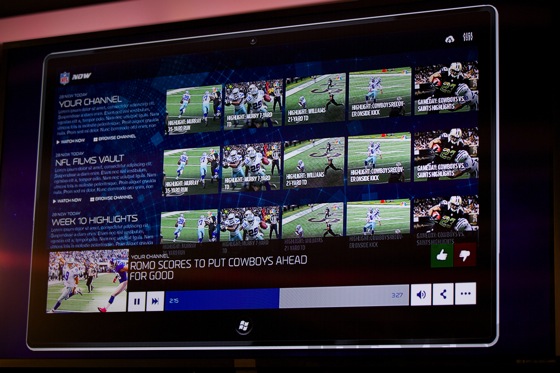