Why Taser's only rival gave up electroshock for lemonade

Share All sharing options for: Why Taser's only rival gave up electroshock for lemonade

On January 10th, a federal judge in Delaware awarded nearly $2.4 million to Taser International in a patent lawsuit. The award was the final decision in a court battle with Karbon Arms, Taser’s last standing competitor in the industry focused on selling electroshock weapons to police. Taser claims to supply electroshock guns — the stunners known as Tasers in the same way that tissues are known as Kleenexes — to about 16,500 of the 19,000 police departments in the US. So it’s surprising that Taser even had a competitor, let alone one it needed to stand off against in court.

As it turns out, this battle has been ongoing in various forms for a decade. The judge’s award earlier this month was a debilitating blast to an already maimed Karbon Arms — and it ended up being a kill-shot. As of this month, Karbon is officially "closed for business." But questions remain about the man behind Taser’s last competitor. Who would be audacious enough to fight for a decade against a company with 90 percent market share in its industry? And after a standoff with the mighty Taser International, what could possibly come next for the entrepreneur?

The man behind Karbon is Robert Gruder, a Tampa, Florida businessman whose history is as far removed from electroshock weapons as anyone could expect. He was never a cop. He’s not an electrical engineer. In fact, his background is in finance. And his first company, GEM Technologies, was conceived in 1990 to translate back-end code for corporate IT systems. That "morphed into" Alydaar Software Corp., then morphed again into one of the most high-profile companies proselytizing for Y2K computer-system protections.

But as Y2K approached, Gruder realized Alydaar was a one-trick pony. "Y2K was the only business I’m aware of where you knew exactly when your final deadline was going to be," Gruder says. So he decided to rebrand as the Information Architects Corp. It produced Jitzu — a predecessor to MySpace or Facebook, Gruder says, that cost $49.95 and failed almost immediately. "It was a little too visionary for its time," according to Gruder.

Gruder wasn’t discouraged, though. He had another market in mind. "I knew," he told The Verge, "I could build a better Taser." 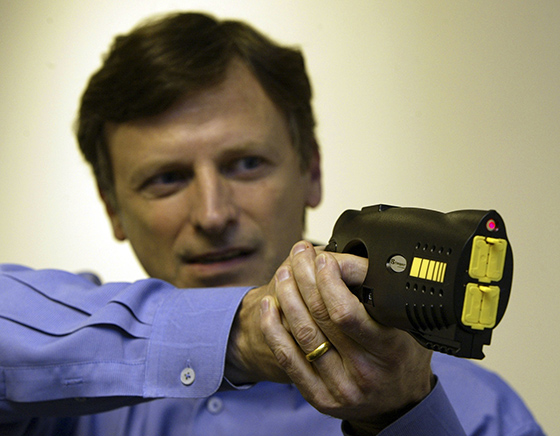 It’s understandable that someone like Gruder — with his keen eye for emerging tech markets — would have seen Taser International as a potential target in 2002. While Taser has a huge market share today and recently expanded into body-worn police cameras, its only products in 2002 were variations on its flagship device, the electroshock gun. That fact, Gruder says, made them vulnerable. "I’m an opportunist," Gruder says. "It was a large market just like Y2K was, and it seemed like a good space to get into."

Gruder’s first attempt at a Taser competitor was called Stinger Systems. He brought on investors and began the process of taking the company public. By late 2004, he announced that his new electroshock gun was in production and ready for sale. He also said it had been approved as a non-firearm by the US Bureau of Alcohol, Tobacco, and Firearms (ATF).

That last point was a huge deal, because it meant his weapon wouldn’t be regulated in the same way as a gun. That regulatory snare kept Taser stagnant for years in the mid 1990s before the company started booming around 1998. If Stinger had a serious electroshock weapon that wasn’t a firearm, it could compete with Taser.

Unfortunately for Gruder, Taser did not take his competition lightly.

In late 2004, Taser filed a trademark infringement lawsuit. And things never really picked up for Stinger after that. It took about three years for Taser to prevail in that copyright case, and in that time, Taser also hit Stinger with a patent lawsuit. What’s more, the US Securities Exchange Commission (SEC) filed a complaint alleging that Gruder had lied to potential investors about production levels, readiness for sale, and approval by ATF. The National Institute of Justice also released a report panning Stinger’s main electroshock gun, stating that the Stinger was less reliable, less accurate, and less durable than Taser’s X26.

The SEC complaint was eventually dismissed, and the NIJ study acknowledges that the Stinger weapon tested was a prototype not cleared for sale, but that didn’t matter; the bad press, combined with the lawsuits, was enough to send Stinger into its death throes.

By 2010, Stinger was out of money and in debt, and it had lost its court battles with Taser. So it had little choice but to go out of business.

By that time, Gruder tells The Verge, he had become more than aware of complaints about Taser’s shock weapons. There were (and still are) plenty to choose from. A simple Google News search for "Taser," for example, will show some weird news and Taser press, but also a multitude of controversies over the company’s electroshock guns being deployed by police officers. Those deployments have led to lawsuits, public battles, and Taser-related deaths now estimated to be well over 800.

So Gruder made a move similar to his move with Alydaar years ago: he used the patent loss as an opportunity to rebrand and try again. Then he shrewdly purchased his own dying company’s patents from himself, and began working with experts and designers to build a better version of Stinger’s weapon. Gruder set his sights on making a weapon that was just as good as Taser’s X26 at incapacitating a human being, but less likely to cause fatalities.

"There was no list of the dead for Karbon."

Pointing to a study by scientists at the University of Wisconsin’s Department of Biomedical Engineering, Gruder claims he achieved that goal. That study shows Karbon’s main weapon fires triple the number of electronic pulses per microsecond than Taser’s X26, with a less severe shock per pulse. Gruder says that’s why "there was no list of the dead for Karbon."

A less severe shock certainly sounds safer. But it’s difficult to say that Karbon’s weapons solved the electroshock fatality problem. Karbon wasn’t a public company and didn’t release sales figures, though Gruder estimates Karbon had overall sales of $1.5 million in 2013. Still, that figure is dwarfed by Taser, which boasted $123.5 million in revenue last year alone. Taser’s electroshock guns have been deployed exponentially more than Karbon’s, in other words, skewing any comparisons on fatality tolls.

But if Karbon wasn’t going to solve the fatality problem, no one else was going to either. Other Taser competitors over the years have come and gone. One company, Law Enforcement Associates, joined the electroshock competition around the time Stinger made its first forays into the market. That company now sticks to surveillance and lighting systems. There’s also Phazzer — a blatant Taser knockoff — but the fact that Taser hasn’t mentioned this particular competitor in SEC documents indicates the company doesn’t see it as a pressing concern.

"Taser will continue with their monopoly."

In any case, it’s unlikely Gruder or Karbon will see their weapons further tested on the public because Taser has relentlessly attacked Karbon in court, just as it relentlessly attacked Stinger. Taser filed a patent lawsuit in Arizona almost immediately after Karbon went to market with its new product. Then it filed another lawsuit in Delaware. While Karbon prevailed in the Arizona lawsuit, the $2.4 million award against Karbon this year was too much to bear.

"Needless to say, they had a bigger bankroll than us," Gruder says. "They sued us out of business. So they’ll continue with their monopoly."

Taser International’s press liaison declined to comment about its patent battle with Karbon beyond what the company offered in a press release. But Polk Wagner, a professor of intellectual property law and policy at Stanford University, says that Taser’s lawsuits against Karbon and Stinger tell a classic story about innovation: Taser invented a new technology, and it’s going to do whatever it can to protect it.

"That story only works," Polk continues, "if you think the patent system is working well." Not that it necessarily is. "Maybe it’s allowing companies like Taser to protect an edge in the marketplace," he adds. "That’s not necessarily a technological edge but merely an edge by virtue of being in the market longer."

According to Gruder, Taser’s legal dominance comes down to that, a wealth of cash, and a willingness to bully competitors.

"That story only works if you think the patent system is working."

Already, though, the man who fought Taser and lost has moved on to new things. He’s now hoping to get investors — through a not-yet-launched Kickstarter campaign — for VidaPak, a take on the wildly popular K-cup coffee-making system designed for cold drinks.

It’s a far cry from incapacitating bad guys with electroshock weapons. But it seems appropriate that Gruder would jump right into a new entrepreneurial venture. The man, it seems, is perpetually undiscouraged.

"Everybody likes coffee like I do, so I think this is really going to be big," he says. Then, laughing: "Let's just hope Taser doesn't get into single-serving beverages."