For the longest time, the prevailing trend with mobile phones was to take last year’s handset and make it smaller. Shave a few millimeters off, shed a couple of grams, and give users the same experience but in a leaner shell. The rise of smartphones and their incessantly improving spec sheets derailed that habit, but now Sony’s returning to the old ways with its new Xperia Z1 Compact.
In all the important ways, this is still the Xperia Z1. The processor and camera are untouched, the software is identical, and the physical design retains its signature mix of waterproof ruggedness and glossy stylishness. Only the Z1 Compact shrinks it all down to the footprint of a 4.3-inch screen.
As Sony Mobile CEO Kuni Suzuki recently said at CES, “we are Sony, so of course we’ll do things a little differently.” The Compact swims against a tide of ever-expanding Android flagship phones and finds itself occupying a weirdly neglected space between Apple’s 4-inch iPhone and the litany of 5-inch contenders. You can already buy 4.3-inch phones and you can certainly buy top-tier Android handsets, but it’s been a while since you could get both in the same device. Is the Xperia Z1 Compact such a phone?

As handsome as ever

One thing that’s been consistently true of Sony’s OmniBalance design — "symmetry in all directions," as the company defines it — is that it looks better than it feels. Introduced with the Xperia Z a year ago, this design language has propagated throughout Sony’s mobile portfolio, lending the company’s products a sophisticated and classy appearance, but it ultimately comes at a cost.

A single piece of milled aluminum forms the handset’s frame and turns it into a sublimely rigid and sturdy-feeling piece of technology. Its sharp straight lines are identical to those on last year's Z1, and just as with the earlier phone, the new smaller handset feels too angular in the hand. Whereas the Moto X gently snuggles into my hand, the Compact presses its corner into my palm and never feels entirely comfortable. That’s a significant shortcoming for a device whose core appeal over its predecessor lies in being more diminutive, and thus easier to handle.

The Z1 Compact is indeed a major improvement over the Z1 in terms of ease of use, but as long as Sony persists with the blocky design language, ergonomics will continue to suffer. Other little annoyances include the exposed dock connector on the left side — whose edges I habitually rub up against — and the excessively stiff power button and spongy volume rocker on the right. On pure handling alone, I’d pick the Moto X over the Z1 Compact every time.

The Z1 Compact isn’t without its strengths, however. Firstly, unlike the vast majority of high-end phones, it's waterproof. That means as durable as your friend’s iPhone may be, this smartphone will always outlast it in a rainstorm or an accidental dip in the pool. You can also use the Z1 Compact with gloves on — thanks to the addition of a hypersensitive touchscreen mode — plus there’s a dedicated camera key, a feature that’s growing out of style these days.

Sony’s greatest feat with the Xperia Z1 Compact can be found on the inside. Unique among phones of its size, the Compact has a 2.2GHz quad-core Snapdragon 800 processor, 2GB of RAM, and a 20-megapixel camera alongside a 2,300mAh battery. That’s 100mAh more than on the Moto X and exactly as much as you’d get on the significantly larger Nexus 5. When you add in all the usual wireless radios like Bluetooth 4.0 and NFC, the end result is a very densely packed phone that feels surprisingly heavy and substantial.

Sony has tucked away a single loudspeaker at the bottom of the Z1 Compact, which does a reasonable job of conveying notifications and blaring out the occasional tune. Cellular reception and call quality are similarly competent — neither stands out as excellent, but there’s little cause for complaint either.

size of a pony, power of a thoroughbred 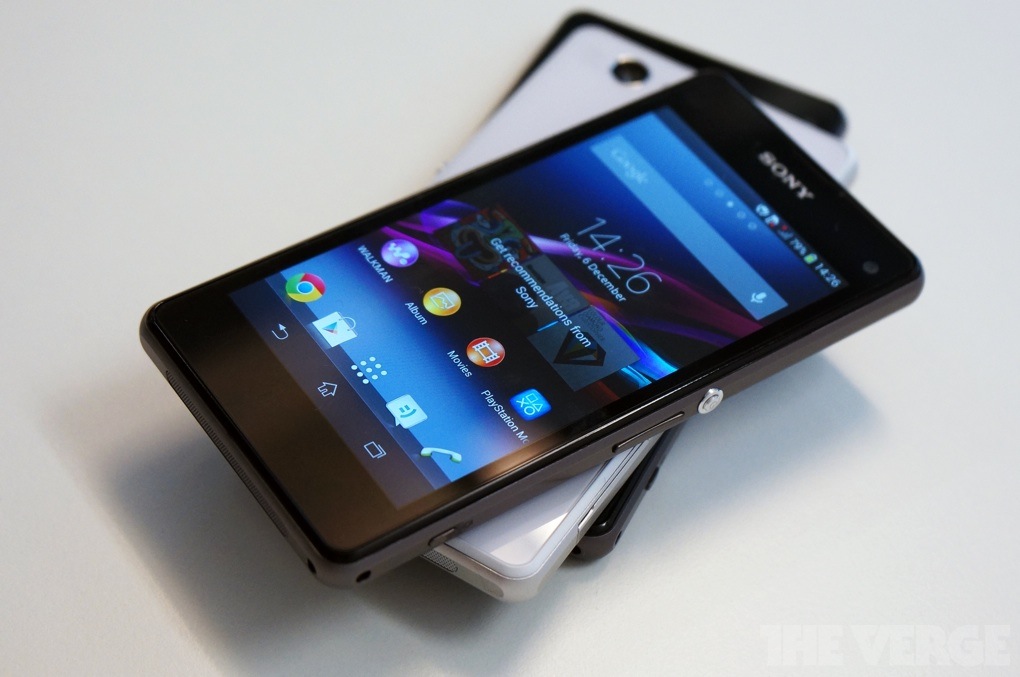 A critical component that straddles the divide between internal hardware and external aesthetics is the display, which Sony has wisely upgraded to a new 1280 x 720 IPS panel. It’s difficult to overstate how much of a difference this makes to the phone’s daily use. Whereas Sony’s previous choice of screen would wash out when viewed at an angle, the new display retains its color fidelity and contrast wherever you’re looking at it from and delivers much deeper blacks. As a result, the entire phone feels immediately a step above Sony’s previous generations. It’s also nice to see Sony include a white-balance adjustment in the Compact’s settings, though I didn’t feel the need to use it owing to the display being well-calibrated right out of the box.

A higher-quality display doesn’t just benefit the look of the Z1 Compact, it also helps it last longer. Whereas Sony’s earlier smartphones would crank up the screen’s backlight to try and compensate for its inadequacies, the new panel inside the Compact is a lot more frugal with its power consumption. Not having to push a full 1080p resolution also lightens the load on the memory and graphics processor, which again extends the phone’s endurance. The Verge Battery Test bears this out: the Xperia Z1 Compact lasted a terrific 8 hours and 51 minutes before hitting its 10 percent battery warning, falling just 60 seconds short of LG’s excellent G2. For a phone of its size, the Compact’s battery life is unmatched. Even the Moto X (which did well at 7 hours and 14 minutes) can’t keep up.

Unmatched battery life for a phone of this size

Real-world use agrees with the benchmark numbers. Even without Sony’s Stamina mode — which turns off most functionality when the screen is off, but keeps notifications and calls coming in — the Compact lasts an unusually long time. 24 hours of light use only consumed a third of the battery’s reserve for me, but even when you use the phone intensively, you’ll struggle to drain a full charge in the space of a day. 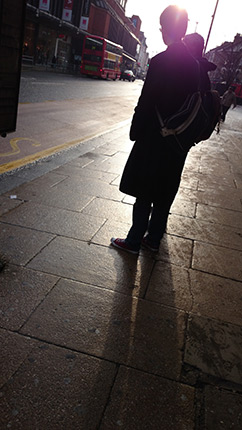 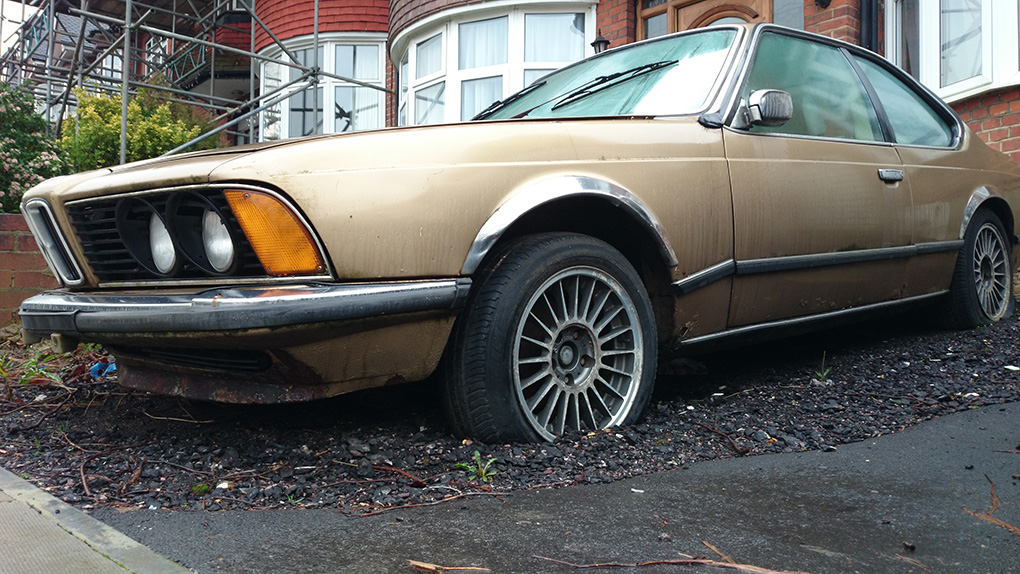 The "Compact" in this new phone’s name comes from the fact that it’s intended as a miniaturized version of Sony’s 5-inch flagship Z1. That means the exact same processor and camera combination you’ll find in the bigger phone have been faithfully transitioned to the smaller device. The Compact is just as quick and responsive as its bigger brother, and its camera is just as peculiar.

You get a large 1/2.3-inch sensor, which can either shoot 20-megapixel stills or oversample — algorithmically condense multiple pixels’ information into one to make for a clearer image — and produce 8-megapixel pics. (You’ll find a more in-depth breakdown of the camera’s advantages and shortcomings in my Z1 review.) The important things to note are that this camera is capable of great things, but Sony’s software is too aggressive in processing the images that come out of it — often making them look good, but rarely natural. 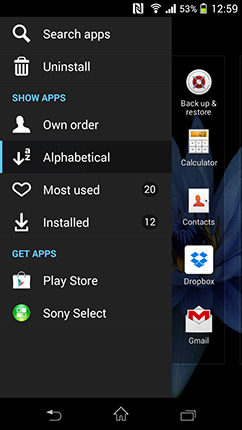 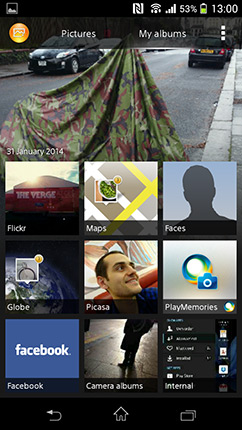 Sony addressed its biggest hardware deficiency by upgrading the Z1 Compact to an IPS display, but recurring shortcomings on the software side remain unaddressed. The original Z1 was a version behind the latest Android phones when it shipped out and its Compact sibling is unfortunately repeating the offense. Android 4.3 is not bad in and of itself and an upgrade to 4.4 KitKat is promised "within the next few weeks," but Sony isn’t doing itself any favors by being habitually behind the curve.

Motorola’s rapid Android 4.4 upgrade rollout and subtle enhancements on top of the stock operating system have recently transformed the expectations of what a modern Android phone can and should be. By comparison, Sony’s Android skin feels burdened with dubiously useful additions — like "mini apps" you can have hovering above the screen — and widgets. Some of them make sense on larger devices like the Xperia Z Ultra, but they don't help much on the Compact. If adding those customizations is the thing that’s holding Sony back from launching its latest Android handset with the newest OS version, then the company would do right by its users to abandon them and deliver the best possible software.

If only Sony’s software could keep pace with its hardware

As hard as Sony tries to offer unique software, its efforts more often come across as spammy rather than helpful. You’ll get regular notifications prodding you to use Xperia services — like "my Xperia" for finding your phone — and it’s impossible to use the Walkman or Movies apps without being reminded about Sony’s Music and Video Unlimited services. Third-party app inclusions are no less intrusive, with Sony persisting in bundling McAfee internet security and integrating Facebook into your Albums app. You can’t uninstall the Facebook app, nor can you remove it from your picture albums view — so you’d better really like Facebook.

There are some minor stability issues with the Z1 Compact’s software too. The camera app would occasionally turn to a black screen or close down of its accord, while vertical scrolling motions are sometimes misinterpreted by the phone as pinch-to-zoom gestures. These don’t do enough harm to offset all the good things about the phone, which can also be said of the entire OS. The foibles are correctable and the underlying power of the Android platform is still very much there for you to exploit. It’s just a shame that Sony’s software can’t keep up with its innovative and unique hardware.

With the Xperia Z1 Compact, Sony set out to condense its flagship Z1 smartphone into a smaller form factor, but it’s ended up producing something even better. Though smaller on the spec sheet, the Compact’s battery actually outlasts the Z1’s, while the upgraded IPS display imbues the new phone with an air of quality and modernity that Sony’s phones have until now lacked. Washing away the sour taste left by the likes of the Galaxy S4 mini, the Compact also emphatically proves that you can build a 4.3-inch Android phone without compromising on specs. Its combination of power, battery life, and form factor is simply unrivalled. And it’s waterproof.

The only area where Sony still has catching up to do is the software. Not shipping the latest version of Android from the start of a phone’s life isn’t an encouraging sign for support in the future, while the company’s insistence on promoting its content ecosystem is off-putting and unnecessary.

With every new generation of Xperia handset, Sony has shown itself alert to criticism and responded by rectifying one or multiple issues. The Z1 Compact is another imperfect phone from the Japanese company, but it’s the closest Sony has yet come to the title of being Android’s best.