Boeing draws giant, invisible '12' in the sky for Seahawks fans

Boeing draws giant, invisible '12' in the sky for Seahawks fans

Say you're a Microsoft executive getting ready for the Seahawks' performance in Sunday's Super Bowl: maybe you have a jersey on, maybe you're wearing a cap. Going for the understated look? A Seahawks logo polo shirt or pullover fleece will do. If you're feeling really crazy, maybe you've affixed a "12" decal to your car — Seattle's universal sign for the "12th Man," a nod to the Earth-shattering crowd noise at CenturyLink Field.

Sure, you're a fan. But Boeing has you beat. 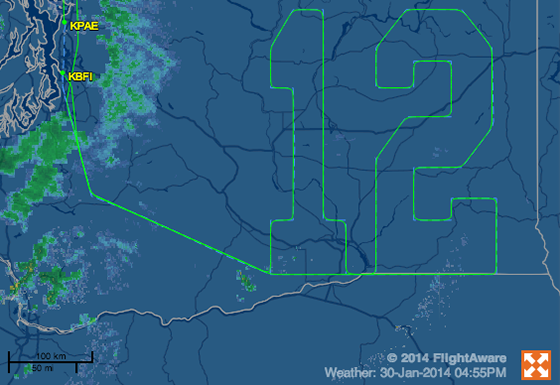 The aviation giant, which has called Washington home in one capacity or another since the 1910s, just painted one of its new 747-8F flying freighters in Seahawks colors and used it to trace a block "12" across the skies of the Pacific Northwest. You couldn't actually see the "12" — the aircraft wasn't leaving a trail of smoke, and it was too big anyway — but aviation nerds could load up FlightAware to see the stunt in real time. It's not the first time Boeing's used one of its airplanes as an oversized pen: the company drew its logo using a 787 Dreamliner a couple years ago. For sports fans, though, this one's a little more interesting.

There's no word on whether Boeing — which has been headquartered in Chicago since moving there in 2001 — might do the same for the Bears in the unlikely event they ever make the Super Bowl again.