25 years of Madden, the video game that changed football forever

Share All sharing options for: 25 years of Madden, the video game that changed football forever

In 2004, my friends and I made a rule: when we played Madden, no one was allowed to be the Atlanta Falcons. With them, you were unstoppable, because quarterback Michael Vick was unstoppable. Thanks to a 95 speed rating and 97 acceleration, he was the best rusher in the league and a near-lock to score any time he sprinted to his left. And if the defense against all odds managed to contain him, he had a 98 throwing-power rating and would just heave the ball downfield from any of a dozen awkward body contortions. He was all but flawless, dominant, perfect: he'd probably have been the league’s best defender, kick returner, and punter if he’d tried. In short: he broke Madden.

Deion Sanders was similarly unstoppable in Madden ‘95: I once won a game without my offense ever taking the field because Sanders ran back every kick or punt for a touchdown. Like Vick, Sanders was a player the likes of which the NFL had never seen, and it took both the league and the game a while to figure out how to contain him.

Madden has changed and evolved countless times for those reasons and many others, and this winter, at the Museum of the Moving Image in New York City, its entire history is on display. To move from the very first installment, 1988's John Madden Football, to this year's Madden NFL 25, is to witness both the evolution of football and of video games. And, in a way unequaled by any other game or franchise, to see how the two have become inextricably linked. 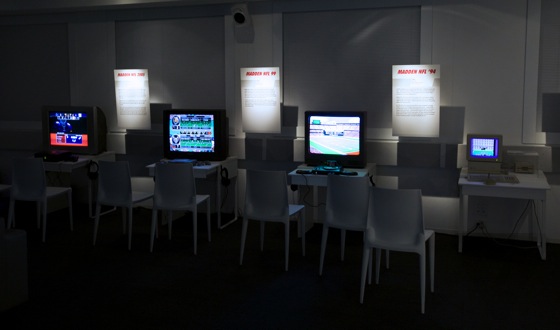 Carl Goodman, the executive director at the museum, says he picked Madden simply because there's nothing like it. (Well, that, and having the Super Bowl in New York this year didn't hurt.) "Most of the things we do with video games tend to be with things that are very casual. Arcade games. So we wanted to take something that we had a sneaking suspicion is almost un-exhibitable and exhibit it. What does it mean to show an incredibly complex game that most people will find almost impossible to play unless they’ve played it before?"

Could someone learn football just by playing video games?

The result feels right out of a modern art gallery, the walls of a stark room sparsely decorated with the history of the game. On one side, a timeline of the major versions and milestones; on another, four different games on four different consoles; on the far wall, a huge projector displaying Madden NFL 25, the latest version of the game. "We wanted to show the newest game really, really big," Goodman says. "Even if you have the same game at home, we wanted to make it enhanced. The sound, the picture — if you’ve played this game at home you still haven’t played it this way."

The Madden franchise has been around long enough to have a generation of professional football players who grew up playing the game. Cam Newton is one: Goodman tells me that "for him more than others, the game and The Game are much more inseparable." (At an event hosted by the museum, Newton admitted to being jealous of virtual Vick's incredible abilities.) And the game has become so realistic, Goodman says, that "it won’t be too far away when somebody in a culture that doesn’t have professional football learns about football and gets skilled at it through the game, and then becomes a professional player." He pauses for a second. "It would probably have to be a kicker or something."

I began my journey through Madden history by firing up an Apple II to play John Madden Football. It took Goodman and his curators some luck to unearth the game: even EA didn't have a copy, but one of its employees happened to have a working version lying around. The game was made without the ability to use player names — EA's license began with Madden ‘95 — so the league is populated by men with names like "Assassin." It's spectacularly complex, even compared to current games: you design a brand-new play on every down, and the game does very little to help you.

The Apple II's graphics are terrible, each player just a jersey and a constantly moving pair of legs, and between the finicky Apple Joystick and the monochrome screen of numbers that is somehow supposed to be a play-calling mechanism, the game is all but impossible to just sit down and play. Yet at a very basic level, from the camera angles to the way the game displays scores and statistics, it already feels like Madden. 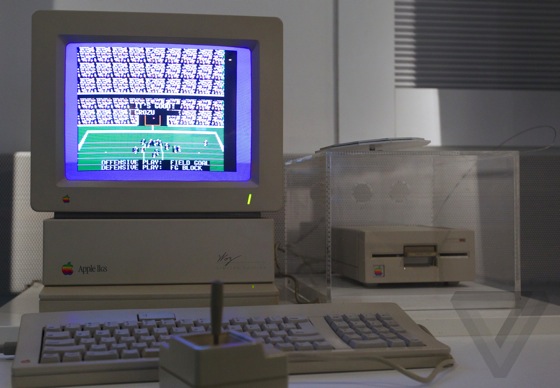 Over its lifetime, Madden has become a far more realistic (and playable) depiction of the NFL. Graphics have improved, plays have become more specific and more realistic. But Goodman says it's still not a true analog to the experience of playing the game. "From a spectator’s or even a connoisseur's perspective, it’s pretty realistic, but if you actually play the game… the plays are represented the right way, the drama of the experience is presented well, but the outcome is — you just never know what’s going to happen on the field." Coding unpredictability is all but impossible, and it's what makes football players great.

The games now about much more than just playing football

But Madden has become remarkably realistic in showing football as more than just a game. "The business, the franchise, being an owner," Goodman says, "that’s when it begins to bleed out into something wider than just the game itself." Franchise Mode debuted in 1998, and has evolved over time to allow players to control everything from ticket and concession prices to player contracts and stadium financing. The game has included studio TV shows, fake newspapers, and much more. The NFL can't be captured between the sidelines, and neither can Madden. 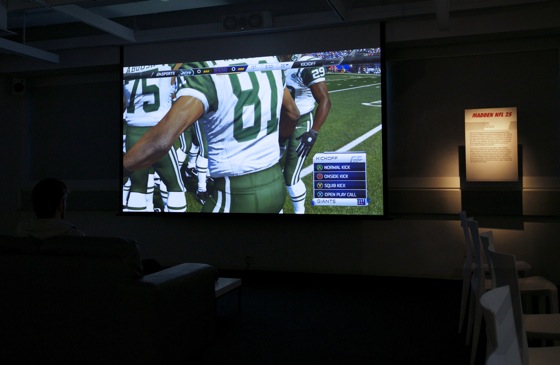 In a quarter-century, the game has had plenty of missteps and false starts, both in how the it's played and what can be done. One game had an ambulance that would come and cart injured players off the field — in such an injury-conscious era, that's a stark reminder of football's violence that the NFL surely protested.

Goodman points out that despite all the advantages conferred by Madden's close relationship with the NFL, he's curious if other developers will see an opportunity to do something different. "Think of all the things you can’t do in a football game when you’re licensing the NFL trademark… I want to see just a completely over the top, Mad Max version of football."

I ask Goodman if he's played NFL Blitz, the rules- and physics-agnostic version of the game created by Midway in the '90s. It's pretty violent: there's no penalty for pass interference or late hits, and it's no fun unless you're hurting someone on every play. "But could you take steroids?" he asks. "Could you take too much cocaine the night before?"

Maybe even after 25 years, Madden isn't that realistic.

Note: the exhibit was co-curated by Samit Sarkar, who works for Polygon, our sister site.