Product announcements may have been slow since CES wrapped up in early January, but this week things took a more exciting turn thanks to Fujifilm and Olympus. Both companies released interesting new cameras that easily stand out within their classes. The two aren't comparable in an obvious way, so we're taking a look at how each stands among some of its potential competitors. 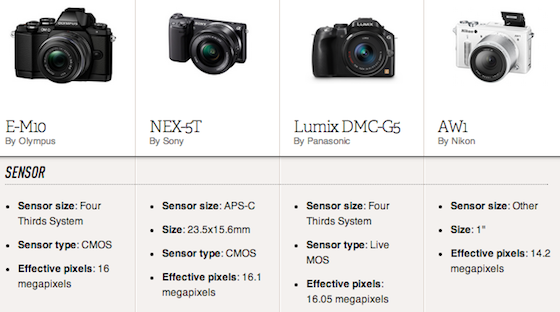 Click above for full available specs on all four cameras.

A powerful package for its price

Bigger sensors may be better, but Olympus continues to make its Micro Four Thirds cameras hard to resist. Its new E-M10's compact metal body is appealing on its own, and the camera's price and feature set only add to that. It has a good number of manual controls, Wi-Fi connectivity, and the same sensor and processor as the more-expensive E-M1. For $699.99, Olympus has put together quite a package.

Those looking for a small and capable camera aren't short for options though. Sony is Olympus' obvious competitor, with its NEX line bringing larger sensors down to similarly small bodies. Sony's NEX-5T began at the same price as the E-M10, though it's now available for a little bit less. Though its larger sensor gives it a distinct advantage, Olympus' camera plays to a different type of photographer. It's heavier on manual controls, includes in-body image stabilization, and has a far wider lens selection — a good set of reasons to consider looking over much of Sony's NEX line.

The E-M10 does well beside its more direct competition too. One of the more appealing alternatives is Panasonic's Lumix G5, a Micro Four Thirds camera that costs quite a bit less than the E-M10 now and offers specs that don't differ drastically. It has fewer physical controls though, and is far from being as stylish. Nikon has its 1 series cameras that reach the E-M10's price too. While they have a much smaller sensor, some offer some interesting options: the AW1 is waterproof down to 49 feet and is a much faster shooter. Still, it's hard not to see the E-M10 as one of the most appealing options at its price — the big question is whether a bigger sensor can tempt buyers away. 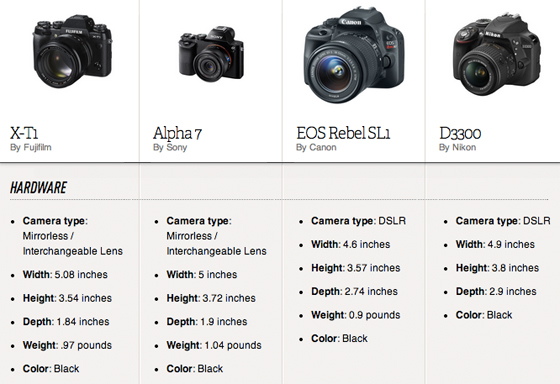 Click above for full available specs on all four cameras.

This week's other exciting new camera is Fujifilm's X-T1. It has an APS-C sensor, a wealth of manual controls, and a huge and detailed .5-inch, 2.36-million-dot electronic viewfinder. With its kit running $1,699.95, Fujifilm is clearly targeting more serious photographers — likely even photographers looking for a capable, but slightly more casual alternative to their full-frame DSLR.

It's getting hard to miss optical viewfinders

Nearly everything about the X-T1 is incredibly appealing from that perspective, from style to substance. The big catch is that a lot of other great cameras are available if you're willing to look at a slightly higher price. Most notable, Sony's full-frame Alpha 7 is available with a lens for around $300 more, and it has quite a bit going for it beyond just sensor size. But there's still good reason to stick with the X-1 — most prominently: a far better lens situation. Sony has yet to develop its FE-lens ecosystem, and that's going to leave photographers looking for flexibility in quite a bind.

If the X-T1 is for someone shopping for a tinier alternative to their existing DSLR, than the other choices are quite a bit different: Canon and Nikon owners may just want to buy the smallest DSLRs they can that support the lenses they already own. Doing so might be a lot less fun than switching to something like the stylish and highly manual X-T1 for a camera on the side, but it'd be a far, far less expensive way to pick up a more portable camera for use on the side.

As for deciding to choose the X-T1 as a primary camera, it's going up against plenty of capable options from both Canon and Nikon, but it's clearly designed for a different style of shooting than a normal DSLR. Fortunately, EVFs are getting better — and the X-T1's is one of the best — and it's becoming increasingly hard to miss the DSLR's optical viewfinder.

There were a few other products added to the database this week:

If you want to learn more about any of the products mentioned above, all of our information on them can be found through the database box located beneath the article. For more on cameras, e-readers, and just about every product around, you can check out the full Verge Database right here.