Lots of floor real estate and a new webOS logo

Share All sharing options for: LG puts webOS front and center at CES 2014

It's still a few days before CES kicks off, but it's looking like LG is planning to make the webOS brand a major part of its marketing for the first webOS TV. A tipster has provided The Verge with images from the CES show floor, and the webOS TV has a highly prominent place in LG's massive booth. From what we can tell, it doesn't look like the set is actually out and on display yet, but there's a large area where LG will show off the highlight features of its new set. LG's touting an "easy navigation," "fun setup," and "simple connection" features, but it's not clear yet how any of these features will work. There's also a new webOS logo — it's definitely reminiscent of HP and Palm's earlier branding, but with LG's color scheme and slightly tweaked text. 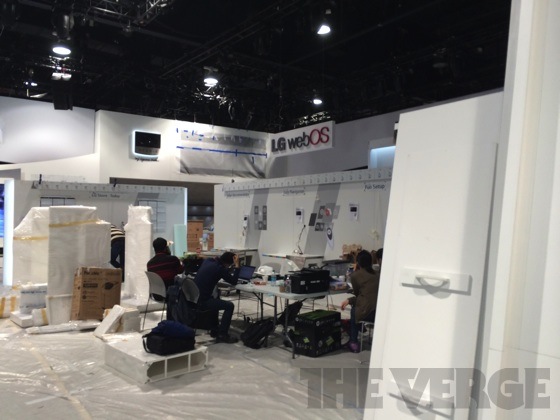 What these pictures do tell us is that LG is going to put the long-dead webOS brand front and center, despite the fact that it failed to gain any significant traction in the consumer mind after failed attempts from Palm and then HP to make it into a viable smartphone competitor.

LG originally purchased webOS assets from HP back in February of last year and quickly hinted that its webOS TV would arrive at CES 2014, but the company has remained largely quiet about how it would use the former smartphone OS — indeed, when LG confirmed the acquisition, it seemed like the company didn't have a strategy yet for how its new software would give it a leg up in the TV landscape.

However, details have started coming more rapidly in recent days — leaks have confirmed that the TV will retain the trademark webOS Cards interface and we've also gotten our first glimpse of the set leading up to its CES introduction. After nearly a year, it remains to be seen whether TV shoppers will know or care about webOS in 2014 — or how Palm's old smartphone OS will work on a TV — but we'll find out in just a few days.