Chevrolet brought journalists to Spring Mountain Raceway this weekend — some 60 miles beyond the glitz of CES and the Vegas Strip — to demonstrate the 2015 Corvette's Performance Data Recorder, a GoPro-on-steroids that's integrated directly into the car. The system includes a high-resolution GPS receiver that's five times more sensitive than the Corvette's standard navigation system, a mic recording the cabin, and a forward-facing 720p camera embedded behind the windshield that combine to output a stream of data to an SD card in the glove box. 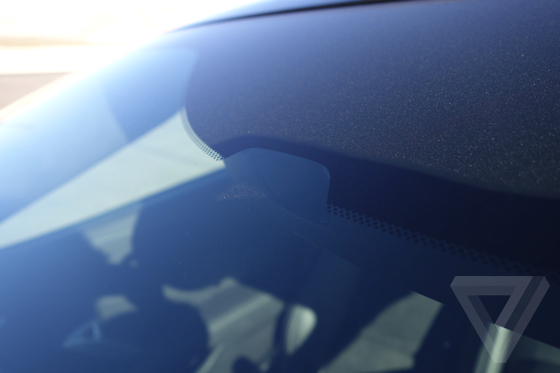 The Performance Data Recorder's camera lies in the headliner near the top of the windshield.

Theoretically, this kind of system could be used as a standard security dashcam — a never-ending stream of video designed to record incidents in the driver's field of view — but in reality, the Performance Data Recorder is geared for track-day enthusiasts who want to share their hot laps on YouTube. It's far more than a built-in camera, though: PDR can overlay the video it records with a variety of metrics of interest to amateur racers like speed, engine RPM, current gear, and a detailed track map created in real time from the position information captured by the high-resolution GPS.

If this all sounds like a big game, it kind of is: the video produced by the car (which can be watched either on the in-dash display or by popping out the SD card) looks an awful lot like Forza Motorsport or Gran Turismo, the biggest difference being you've actually done the driving. Serious gearheads can also feed the exported data into Cosworth Toolbox, an included desktop app that you drill down on your driving behavior to help boost lap times. Graphs in Toolbox chart accelerator, brake, and steering behavior over time, while a side-by-side video view uses GPS to sync subsequent laps so the driver can see how well they're taking turns from lap to lap.

The Performance Data Recorder isn't offered on the 2014 model year Corvettes currently being sold, nor can it be retrofitted — it'll become available with the launch of the 2015 model toward the middle of this year. Pricing hasn't been announced.

More from this stream The best automotive news of CES 2014