Siri's a little jealous of Scarlett Johansson in 'Her'

Siri's a little jealous of Scarlett Johansson in 'Her'

Siri used to deliver some rather opinionated takes on sci-fi movies, and while those have largely been left behind it turns out the digital assistant has some strong feelings when it comes to Spike Jonze's recent film Her. The movie tells the story of a man who falls in love with an operating system named Samantha (Scarlett Johansson), but as BuzzFeed first noticed, asking Siri if she is Samantha results in a terse "no. You know that it's just a movie right?" Different phrasings result in Siri taking shots at how Her "gives artificial intelligence a bad name" and how she "doesn't spend much time with fictional characters." We were quite fond of Her when we reviewed it last year, and it will be opening wide on January 10th — but in the meantime, it's pretty clear how Siri feels. 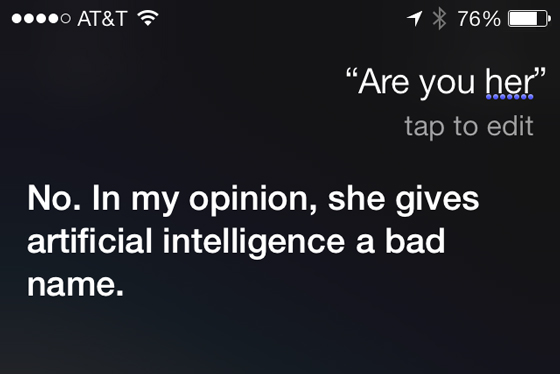 More from this stream Siri hacks, mods, and tricks