The striking Pebble Steel could change your mind about smartwatches

CES 2013 was the big coming-out party for the original Pebble smartwatch and now, a year later, CES 2014 is hosting the launch of the startup's second device, the Pebble Steel. It costs $100 more than the original — which will continue to be available as the entry-level Pebble — and adds a touch of classic watch design, underpinned by the use of higher-end materials.

Sprouting as a Kickstarter success from the remains of the unfruitful inPulse smartwatch project, Pebble is a company familiar with both the ups and downs of the tech industry. It’s now riding the crest of a great wave of popularity that’s only been gaining momentum through the last year. What does 2014 hold for the small team from Silicon Valley?


Pebble CEO Eric Migicovsky tells me the company wanted to broaden the spectrum of people who would consider buying one of its smartwatches: whereas the original has a sporty feel, he says, the new Steel harkens back to classic aesthetics with its more restrained, steel-based design. Its new look is suitable for more austere occasions, while the hardier shell and new Gorilla Glass screen also suggest greater durability.

The Pebble Steel is the product of all the lessons learned from manufacturing the original and all the feedback the company obtained from its users — which now number over 300,000 around the world. People complained that the Pebble was too tall, so the new variant has a much shorter lug-to-lug distance. Others wanted a smart wearable that they could have on their wrist at a dinner party as well on the ski piste, which brought about the more sophisticated new look. And finally, the Pebble company introducing today’s watch is much more experienced, informed, and connected than the one struggling to ship out its first product a year ago — Migicovsky and his small group had never been to China at that point, never spoken to mass manufacturers, or considered the interplay between industrial design and production efficiency. The company’s CEO says the Steel’s design is much more modular, meaning that if any parts aren’t produced to spec, the entire watch doesn’t have to be scrapped. 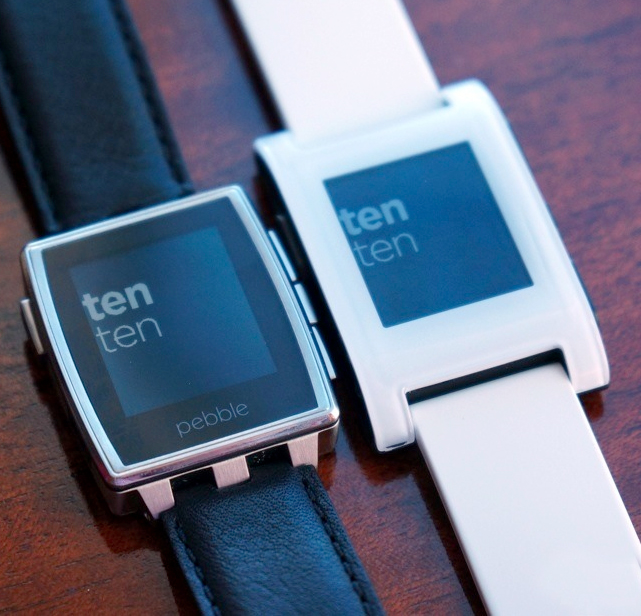 More refined on the outside, almost unaltered on the inside

Pebble’s second watch offers a choice of color between a natural steel gray or black, though whichever you choose, you'll also get a leather strap in the box to go along with your Black Matte or Brushed Stainless chain. The packaging itself is significantly upgraded, exuding a more premium feel and containing a full set of tools for adjusting the new straps and a new magnetic charging plug. Unfortunately, in changing the design, Pebble has had to move away from the original connector, which was designed specifically for the curvature of the first smartwatch. That's the biggest disappointment in what is otherwise a solid hardware upgrade.

The difference in size and feel between the two Pebbles is immediately noticeable. The Steel is significantly smaller while retaining the same display, and though it's also heavier, that's not a detrimental change in terms of ergonomics. It feels exactly like any other steel watch you might consider buying — which is a rare thing to be able to say of smartwatches, a category of products that have traditionally been associated with added bulk and awkwardness. A thin strip of black plastic runs around the sides of the watch, framing the silver version attractively and being barely visible on the black — its purpose is to maintain the same Bluetooth transmission performance as on the original even while encased in the Faraday cage that is an all-steel case. Pebble's also added an RGB LED to the front of the Steel watch, which the company uses to display charging status and will make available to app developers. 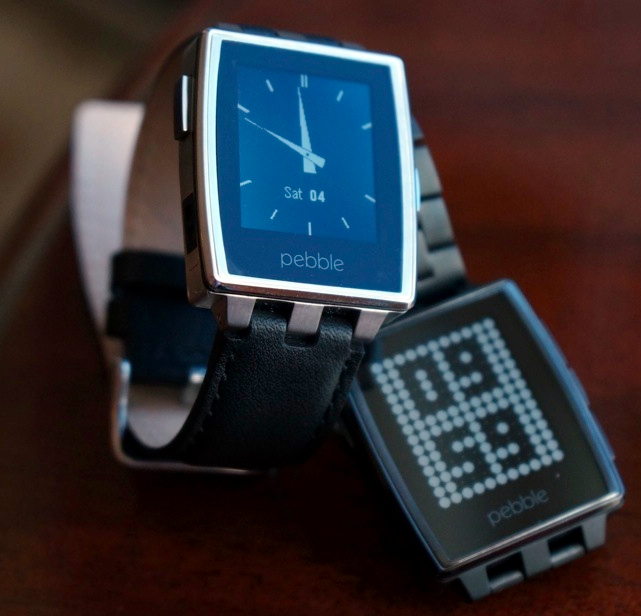 "We won’t be happy until we have Drugwars on the Pebble."

Importantly, Pebble kept almost all the internal parts unchanged in the new Steel model. The same e-paper display, battery, and hardware platform is present, with the only change being a doubling of memory from 4MB to 8MB — this has always been a very frugal device. The company's keen to have a "one platform design," meaning it wants to give a consistent target for developers and avoid hardware fragmentation. To that end, it's launching its app store at the end of this month, right alongside the Pebble Steel's release. Version 2.0 of the Pebble software is also going to be available then, and seeing it on the new watch showed an impressive improvement in speed and performance. There aren't any real interface tweaks to speak of, but the expanded API library and access for devs should mean we see plenty of new functionality for both generations of Pebble smartwatch as 2014 rolls along.

Looking to the future, Migicovsky expects to see even more apps that expand the Pebble’s functionality as a smartphone companion. The already-present Foursquare, Pandora, and ESPN applications are just scratching the surface of an ocean of extra functionality this humble wearable can offer. He showed me a game Pebble built called Piny Wings — as the name suggests, it’s a copy of Andreas Illiger’s iOS game Tiny Wings, but made playable on the Pebble. It’s enabled by a bit of coding magic provided by a Pebble fan in Germany who figured out how to create gradients and simulate 30fps animations on the e-paper display. More than half of Pebble’s current staff are working on software for what is now a family of wearables, and Migicovsky concludes by saying that he won’t be content "until we have Drugwars on the Pebble."

Pebble’s long-term success will depend on making those tantalizing experiences and promises real, but the company’s first hurdle is to get people to even consider wearing its product on a daily basis. The Pebble Steel is the stylish answer to that challenge, and the early impression it makes is a very positive one. The basic foundation may still be the same, but the presentation and craftsmanship of the product have taken a leap forward that will be appreciated by many. The Pebble Steel is available to pre-order now and will start shipping on January 28th for $249, with the original Pebble continuing on as the $149 entry level model.