For automakers, CES is often dominated by self-driving and the ever-growing notion of the connected car, but Toyota's taking a more environmental tack with today's announcement: it's reiterating the call that it will have a hydrogen fuel-cell car for sale to consumers next year that produces nothing more than water vapor from the tailpipe. Toyota has said in recent months that it would have fuel-cell tech in consumers' hands "around 2015," but this is the first time that it's locking next year in stone — and it'll be a global launch, including the US. 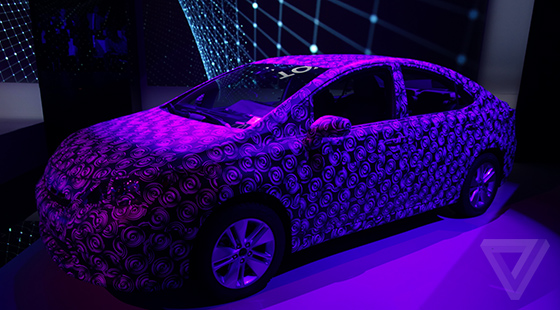 Toyota has been driving this camouflaged fuel-cell prototype, based on the Lexus HS250h, around the United States for the past year.

300 miles on a tank of hydrogen

Fuel cells have long eluded automakers as a viable fossil fuel alternative. The systems, which store hydrogen at extremely high pressures, have struggled with sufficient range, problems in extreme weather, and infrastructure — the cars aren't any good without hydrogen refueling stations in place. Pure electric vehicles, meanwhile, have made major leaps in charger availability in recent years, while Tesla has been announcing new ultrafast Supercharger stations on a regular basis. (Tesla CEO Elon Musk recently described fuel cells as a "bullshit" technology in cars.)

Toyota says it'll launch its fuel cell car first in California — the same state where Honda has offered its FCX Clarity on lease. California is a frequent target for early alternative fuel vehicle launches, and for good reason; as Toyota notes, California has approved some $200 million to build hydrogen refueling stations statewide starting with 20 by next year. Details of the production car haven't been released, but the prototype model that Toyota has been testing recently delivers 300 miles on a tank of hydrogen and takes three to five minutes to top off — reasonable numbers for a car that real-world drivers might want to own.

More from this stream The best automotive news of CES 2014