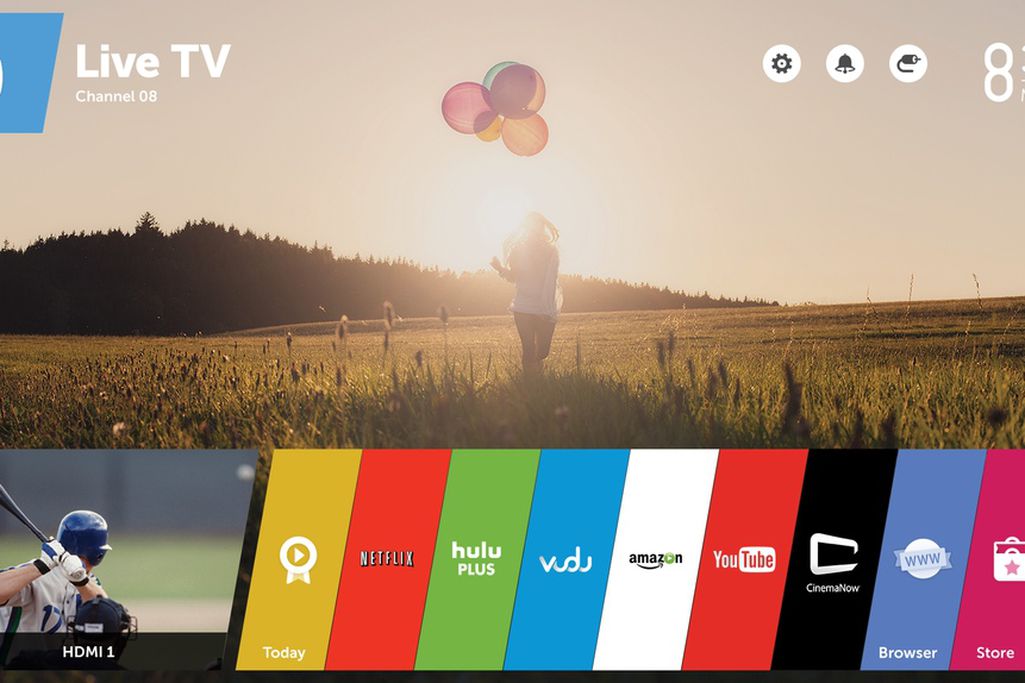 Things never went very well for webOS. Between its blockbuster launch at CES in 2009 and its relaunch on LG's smart TVs today lies a history of failed ambitions and a lost history of never-released products. When LG acquired parts of webOS in February of last year, we had two questions: what exactly did LG plan to do, and why did it need webOS to do it? We finally have answers to both of those questions, and they're unsurprisingly simple and straightforward. webOS turned out to be a flexible platform that could be repurposed for the TV and — more importantly — the team behind it had a vision for how a smart TV should work.

On the eve of LG's launch, I sat down with webOS’s head of product management and design, Itai Vonshak, as well as Colin Zhao, director of product management for LG's Silicon Valley Lab. As they demoed LG's new interface to me, I was by turns intrigued, bemused, and doubtful that it was up to the task of convincing people that it would be worth buying a new TV for. Most of all, I was impressed by the clarity of vision behind the new interface. For better or worse, webOS has an opinion about how smart TVs should treat their users, and by all appearances that opinion is executed very, very well. LG is better known for pretty schizophrenic Android skins on its smartphones, so to see the company produce something this coherent was a shock.


Over half of LG's TVs next year will run webOS TV, so it's a significant effort but LG isn't quite all-in yet. Zhao says that "the war cry that we started with was to 'make TV simple again.'" To pull it off, webOS smart TVs start with the metaphor of the line. Instead of a grid of apps, everything you want to do is arrayed horizontally. "There's nothing simpler than understanding a line," Vonshak says. "You have your past things, you have your present, and you the future."

"There's nothing simpler than understanding a line."

The "present" is the home screen, which appears as an overlay on top of whatever you're watching instead of kicking you off to a separate screen with a grid of apps. The line gives you a list of your favorite apps — stuff like Hulu Plus, Netflix, YouTube, and so on — along with a card that represents your last app and another called "Today" that can make content recommendations.

The key difference between this and other smart TVs is that LG doesn't create a distinction between smart TV apps and regular TV and inputs. They're all just cards. "We wanted unity. Everything is the same, be it your Xbox, your source, or some apps," says Vonshak. "If you're watching Netflix and want to switch to see what's happening in a game, then go back to YouTube, it should be all the same thing." In fact, LG's TVs can automatically identify new inputs and label and name them for you — so if you plug in a PS4, it will appear as a PS4 card, not just "HDMI 2." 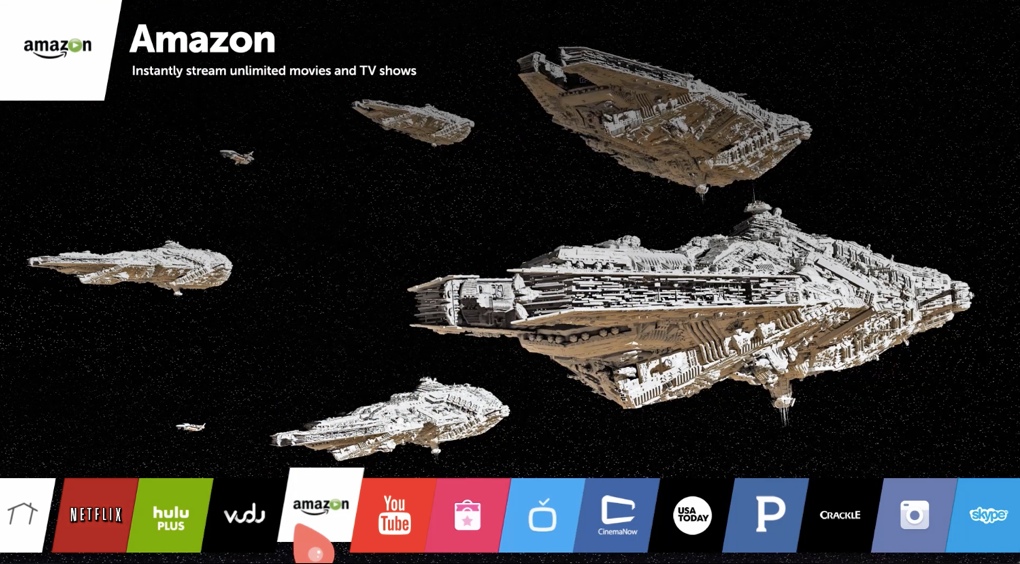 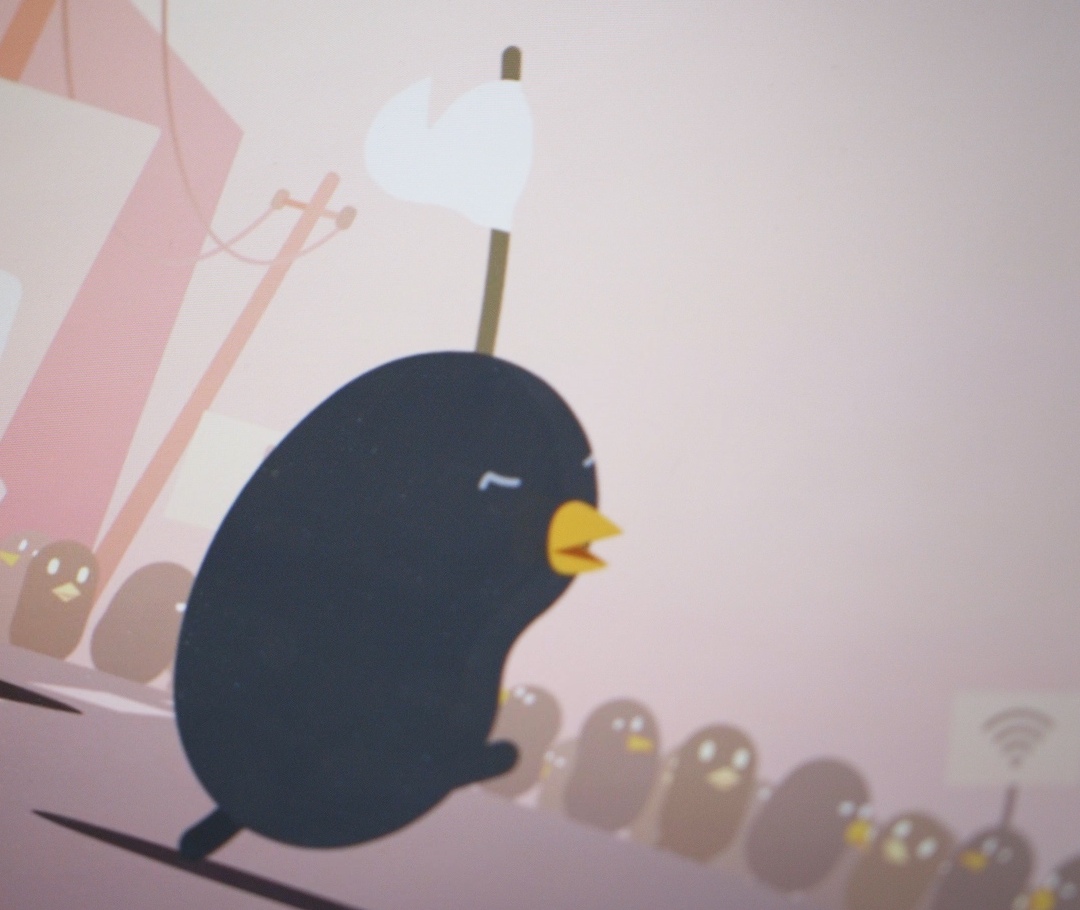 "We have a lot of tension between different parts of the design."

You navigate with LG's motion-enabled remote control and a small on-screen cursor. If you want to watch something that isn't on your home screen, you can select overflow buttons on the left or the right. The left is the "Past," which gives you a history of your last apps or channels in a big list of cards. On the right are apps — and LG will have an app store to fill that list up — and as you hover over each of them, app makers can give you a big, full-screen preview to entice you to click.

Of course, there are settings and even a notification system for apps to alert you about new episodes and the like, but the core of the webOS experience on LG's smart TVs boils down to that single line of cards and apps. It's very restrained, but with flourishes of animations in the transition that are fast enough to not be overbearing and provide just a little bit of whimsy. "A lot of the challenge that comes with flat design is that it gets really boring," says Vonshak. "We have a lot of tension between different parts of the design. There's strong lines, and then they move sort of like jelly, in an unexpected way."

There's one place where the whimsy might be too much — or at least too easy to compare to Microsoft Bob. It's the "Bean Bird," which is part of LG's "Cinematic Setup." It walks users through the first-use experience: setting up time zones and Wi-Fi and the like. Flitting about on the screen, Bean Bird is meant to encourage users to actually finish their smart TV setup — too many just don't bother, Vonshak says, and there's little point in spending the extra money on a smart TV if you don't take advantage of its features. 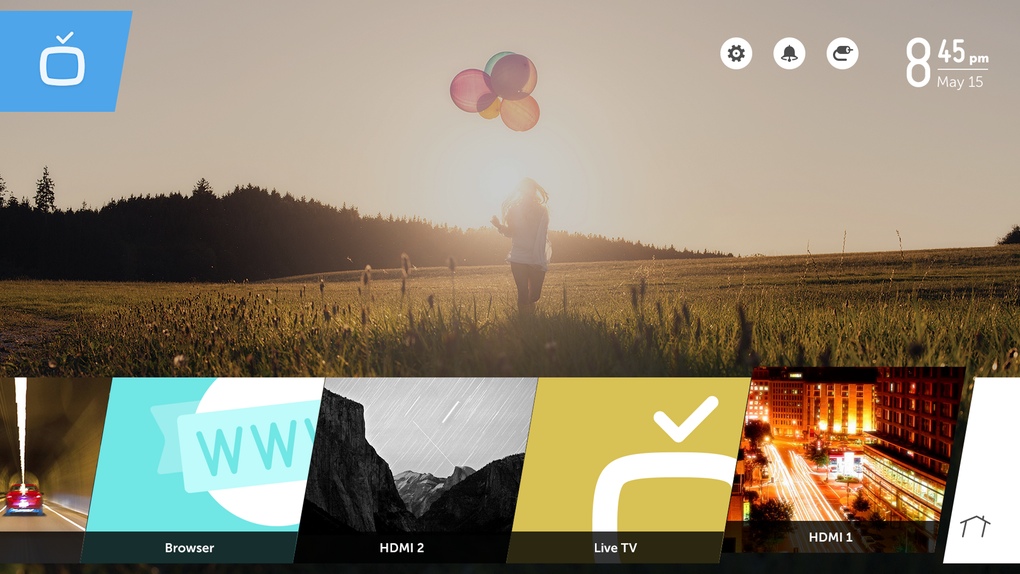 To tell the truth, I found Bean Bird a little charming — but the approach is definitely an easy target for snark, and if LG isn't judicious in using the little guy (or gal?), Bean Bird will earn a well-deserved place alongside Clippy. Watching the bird wave a surrender flag to protest your attempt to skip the Wi-Fi setup once is amusing — having to live with it all the time would be the exact opposite. Luckily, LG tells me that it's just a first-use experience. 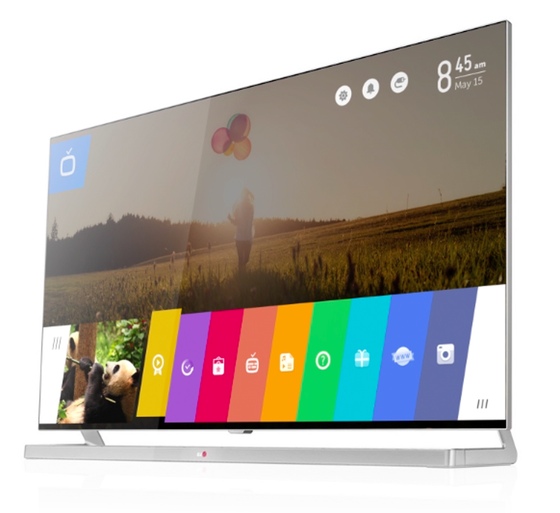 A smaller ambition for a bigger screen

Still, once you get into actually using the webOS interface on LG's smart TVs, you'll be struck by the consistency of the experience. Vonshak says that the design was inspired by the same "war cry" of making TV simple. "The strong colors, and the lines, really come from old TVs and how even the 'no signal' used to look," Vonshak says. "We really found that as a great inspiration source to how to focus specifically on content, on TV itself, and what that thing is."

TV first is a good philosophy, but creating (and branding) the interface with webOS doesn't necessarily seem, well, necessary. Why webOS? Vonshak clearly still has faith in the mission of the open web. "We really believe that the web is the right path forward and the web will win because it's the right ecosystem," he says. Missionary zeal aside, using HTML (and Enyo) makes very good sense for smart TVs — many of the core apps that consumers demand are already available in HTML on the web itself, so it's relatively trivial to get them working on LG's smart TVs.

Earlier I called webOS on smart TVs "a smaller ambition for a bigger screen" and after seeing how webOS works now, that assessment still stands. LG hasn't solved any of the truly thorny problems in the living room. But executing well on a smaller ambition is still to be commended — and my initial impression is that LG may have pulled it off. webOS will never achieve the goals its original creators had set for it. And, to be honest, it won't generate massive consumer demand for LG's TVs. But what it could do is make your next smart TV a little less painful to use. Five years ago at this very show, webOS dreamt big. After seeing those dreams burn in up a conflagration of missed opportunities, even that small victory is a pleasant surprise.