MakerBot unveils the Replicator Mini and Z18, its biggest and smallest 3D printers yet

Share All sharing options for: MakerBot unveils the Replicator Mini and Z18, its biggest and smallest 3D printers yet

This is the fifth year Makerbot has been to CES, and the company has moved from a 10-by-10 booth to a jam-packed press conference at the Mandalay Bay Hotel and Casino. The company has now sold more than 44,000 units and users have downloaded more than 48 million digital designs from its website, Thingiverse. Today it announced a new model, the Makerbot Replicator Mini, a smaller, cheaper unit that CEO Bre Pettis called the "point-and-shoot" model for the Makerbot family. "It's basically one touch, set up for speed. It's the point and shoot of 3D printers."

The device has a connected camera to monitor progress and share images to social networks, and connects through Wi-Fi to a suite of cloud-enabled apps. It has a magnetic extruder that's easy to detach. Pettis said it will retail for $1,375 and be available in the spring of 2014. 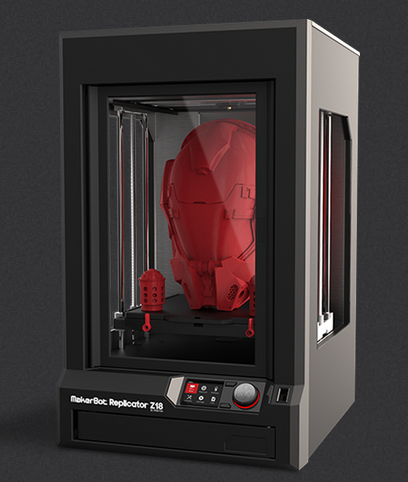 The company also rolled out the Replicator Z18, its biggest unit to date, which can produce 12 x 12 x 18-inch units. Pettis showed off a full-sized Stormtrooper helmet he made with the Z18 that actually fit over his head. The Z18, which ships in the spring of 2014 for $6,499, features an enclosed build chamber that stabilizes larger objects while they're being printed.

Along with these two new models, Pettis showed off an updated version of the company's original Replicator line. It has a new camera, easy-to-remove magnetic extruder, and Wi-Fi connectivity for syncing with the company's new software platform. "These three models are really the same unit, but with different strengths: consumer, prosumer, and industrial grade," said Pettis. 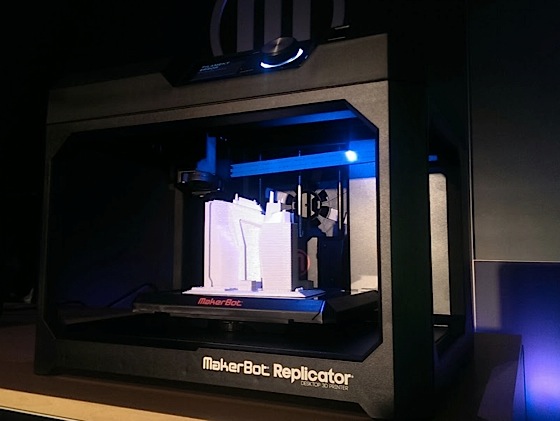 Along with the new hardware Makerbot rolled out a desktop (MakerWave) and mobile app (MakerBot Mobile), a learning program to teach aspiring designers 3D-printing tips and tricks, and its own store full of complex 3D-printed designs created by its in-house studio of designers. Individual models start at $1, with full collections retailing for $10. "We're not just making 3D printers," said Pettis. "We're creating a full 3D-printing platform."