It's coming up on a year since Google began shipping Glass to its first round of public testers. In that time, wearable computing has become the buzzword for the entire consumer electronics industry. But the core capabilities of a Google Glass-like device – capturing hands-free photos, video, and audio in real-time, and instantly sharing it with others – may appeal more to blue collar businesses than to ordinary consumers. Enter XOne.

The first product from Nashville, Tennessee-based startup XO Eye Technologies and five years in the making, XOne is a set of safety glasses designed to bring skilled labor jobs into the future. The glasses look like safety equipment designed by Daft Punk – solid, ruggedized, shiny plastic frames housing colorful, flickering LEDs and releasing a disconcerting amount of heat from the left side. The also lack the most eye-catching feature of Google Glass, a tiny cubic screen that sits in front of a lens. Instead they rely entirely on audio and LEDs to communicate messages to the wearer. The XO Eye team is still finalizing the frames they are aiming to ship to their first customers in the spring, at a to-be-determined cost of between $400 to $600 a pop, plus a $199-per-month subscription software package. 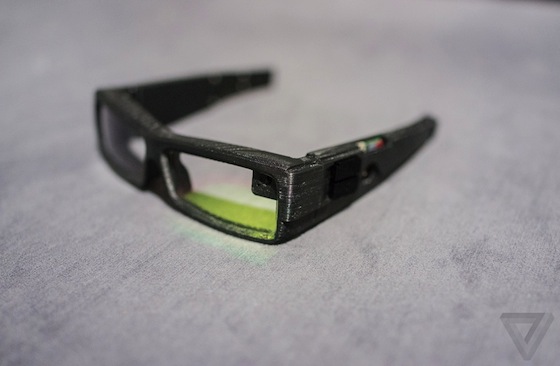 That may sound like a lot to the average consumer, but ideally the XOne glasses would save businesses a fortune. They're designed to give workers and managers a way to stay in touch in real-time when working on important tasks like repairing a jet engine, omitting the need for messy email chains or prolonged phone calls. The idea is that a worker who had a question about a complicated repair job would be able to transmit live video to a cloud server in real-time, and their more experienced colleagues would be able to speak to them, answering questions on the spot and guiding them through the process step by step. "Telepresence is the first major app," says XO Eye CEO C. Aaron Salow. "But there will be many, many others."

Another app the team has developed would quantify wear and tear on workers themselves, using sensors to keep track how many times an individual worker bent over to lift a heavy object during the course of their shift. XO Eye is currently working with other companies and developers to create custom apps specific to their use cases.

When in comes to internals, the XOne has been carefully crafted to fit these needs specifically. The glasses contain two 5-megapixel cameras (one inside each lens), speakers and mics, a gyroscope, and an accelerometer, all driven by an OMAP 4460 processor, the "big brother" to Google Glass's 4430 processor. The XOne glasses also have 128GB of onboard memory and an expandable micro SD card slot. And unlike Google Glass, XOne runs on a custom version of Linux designed to mesh with the often onerous security and cross-compatibility requirements of enterprise software (namely a reliance on Java applets). It's too early to tell whether they'll catch on with big businesses, but XO Eye says they've had lots of interest. And we couldn't help but think of how helpful these could be in an Amazon fulfillment center, paired with something like Mayday.

More from this stream The best wearables of CES 2014