LG's new webOS interface is a smart, simple, but occasionally jittery way to navigate your TV

Share All sharing options for: LG's new webOS interface is a smart, simple, but occasionally jittery way to navigate your TV

The CES show floor is officially open, and we've finally had a chance to take LG's new webOS TV interface for a spin. There's little doubt that LG has come up with a clever and simple way to run your TV, compared to the commonly overwrought interfaces seen on most other smart TVs. Unfortunately, the product also showed some flaws due to the combination of a tough CES connectivity environment and early-stage software.

As we learned yesterday, the interface is composed of three sections. The "present" area, always accessible by hitting the "home" button on the remote, shows your favorite apps and content sources as selected by each user. Here you can pin your cable box, Netflix and Hulu apps, and anything else you might download through LG's store. You access each of these apps via LG's new Magic Remote — it's a small take on the usual TV remote that hooks to the TV through Bluetooth. The main way of controlling the interface is by pointing and clicking; it's not at all dissimilar to using the interface on Nintendo's Wii.

Unfortunately, the interface was a bit finicky and occasionally unresponsive to our commands, but it's entirely possible that's a side effect of the massive number of wireless signals bouncing around the Las Vegas Convention Center. App content loaded slowly (probably due to bad Wi-Fi) and clicking "remote" occasionally did nothing at all — it was a bit of a frustrating experience. That said, the webOS TV certainly worked more smoothly when there were less people around, before a flood of onlookers crowded the area to see the new interface. Despite the connection problems, I really enjoyed the concept of having any video source, be it another device connected to your TV or a content app like Netflix, all readily available. 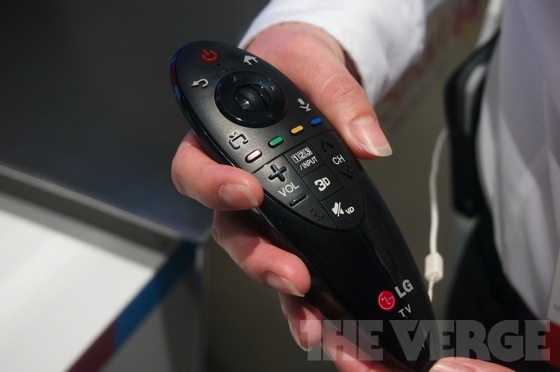 There's two other sections of LG's interface — the "future" section is simply a long list of every app you've downloaded to the set. It's functional but we could also easily see it getting a bit crowded if you install too many things. More interesting is the "past" section — here you'll find any recently used app. The most useful thing about this section is that if you're watching a video on Netflix, for example, it remembers exactly what you were watching and where you were. If you're the kind of person who likes to quickly flip back and forth between live TV and video apps, you won't be subjected to long loading times.

All in all, it's definitely a promising start for LG. When things worked, it was a fast, fluid, and easy-to-navigate experience — something that's a far cry from many other TV sets. On the surface, it has little resemblance to the webOS we used to know, but that's beside the point. Right now, we can say that LG's new TV interface has the potential to be one of the best out there, as long as the company makes sure that a speedy and responsive interface is a certainty by the time it officially launches.