Whirlpool imagines a kitchen of the future with a touchscreen stovetop

Whirlpool imagines a kitchen of the future with a touchscreen stovetop

Whirlpool is showing off a couple of its ideas for the kitchen of the future here at CES 2014, including an interactive touchscreen cooktop that can display recipes, Twitter and Facebook updates, news, weather, and more. If it ever becomes a reality, it could change the kitchen.

A simple mockup demonstrated on the show floor offers an exciting peek at what this future stovetop could look like. Whirlpool wants the cooking surface to be a massive touchscreen that would display information pulled in from a smartphone or tablet. The cooktop's best use might be to display recipes: instead of keeping an iPad nearby while cooking, the display would be able to show instructions right next to your ingredients, pans, bowls, and cutting boards. You'd also be able to change the music streaming on your audio system or keep tabs on different social media feeds, for instance, and it would all be voice controlled as well.

The cooking surface would use induction to heat pots, allowing you to cook on the counter while keeping it cool to the touch. Induction heating elements only interact with metals, and stovetops using the technology are already available. Nevertheless, Whirlpool is clearly very far away from turning this concept into a reality. The company's vision is to produce a large and thin tablet-like device or mat that you could place on any surface. The company wants to build induction elements into this thin device — a significant hurdle, considering current induction stovetops are quite large. Combining some sort of touchscreen technology with this will also present a significant problem. The demo we saw was merely a mockup, a non-interactive projection on a countertop, but representatives do say that this sort of technology is in "active development" and is hopefully about five years out. 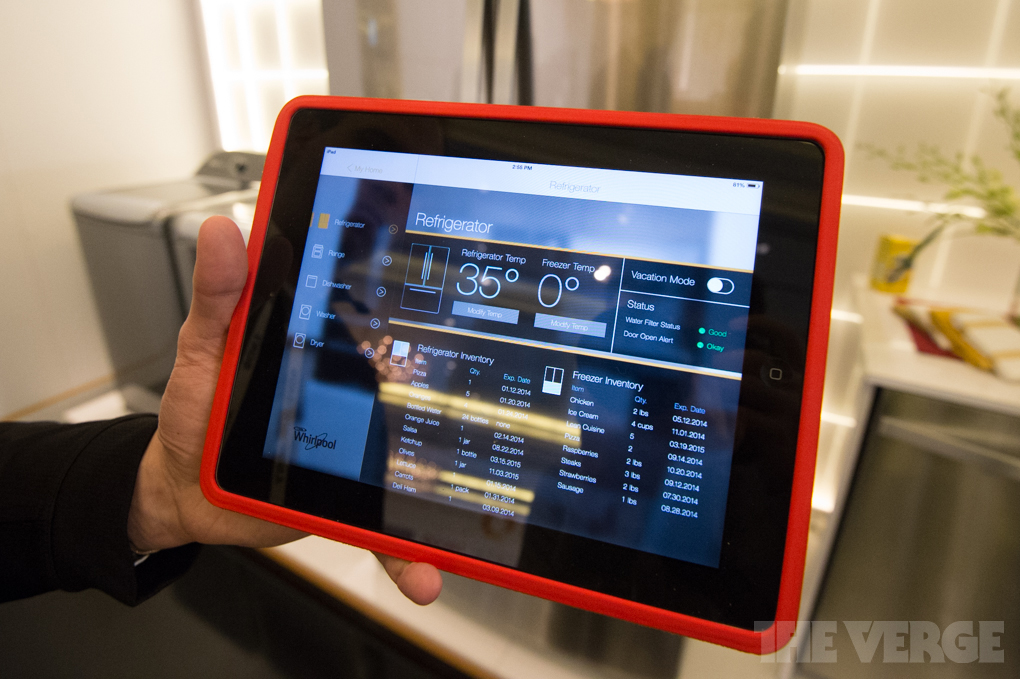 Whirlpool is also showing off a concept for its next-generation connected kitchen suite. The company imagines a setup that allows the fridge, dishwasher, oven, stove, and washing machine to talk to each other and be controlled by an app. The concept was largely based on the fridge being able to keep an active inventory of its contents. It could then suggest recipes, and it could automatically program the oven, for instance. Another idea is that the system could know what kind of stain you got on your clothing and it'd set to washing machine to optimize for that type of cleaning. Most of this sounds like little more than a fantasy for now, but it's clear that Whirlpool is working on advancing its connected kitchen products. And, after all, CES is designed for these sorts of wild — and exciting — looks at the future.