At a sit-down with Sony CEO Kaz Hirai, the company head spoke on the new products and services announced at CES 2014, some of which were just introduced today. One of the more interesting developments on center stage was the announcement of a new streaming cloud TV service that could be Sony's first real initiative to take on the living room in a cohesive manner.

Hirai was tight-lipped when discussing the service's features or Sony's partnerships, but he was quick to defend against the notion that Sony's cloud TV would be running up against cable providers. "We're not trying to compete with the cable operators — we're trying to resolve one of the biggest hurdles, which is watching live TV and streaming content on different devices." However, he did note that on live TV broadcasts, there was a chance for friction. "Everybody's been talking about it, I don't think anyone has been able to do it," Hirai said, describing a system that could, when all is said and done, look a little something like what Microsoft is trying to do with the Xbox One. 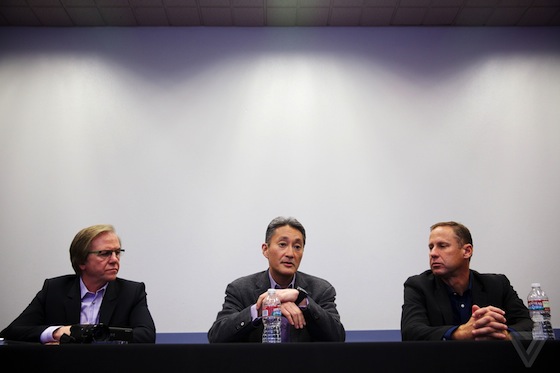 Unlike Microsoft's push, Hirai focused on the installed user base of the PS3, suggesting that when the service does come to customers it will be modular and will allow TV viewing across several of the company's products. "I know Intel was in this space as well, but from my perspective, when you look at the installed base of the PS3 — 25 million in the US — when we're talking to a lot of the broadcasters, it's a compelling number."

When asked about the company's 4K push in both content and technology, Hirai sees a slow climb to mainstream adoption. "How long did HD take?" Hirai asked, as he suggested mainstream adoption of 4K could take five to seven years. Sony doesn't see its 4K business as only for the mainstream, however — Hirai pointed out that early adopters are very much a part of its plans, and the need to get those adopters into retail stores to see the difference between HD and 4K is crucial to the selling process.