Venice-based GlassUp today unveiled its first augmented reality glasses prototype, an interesting combination of Google Glass and a more conventional heads-up display. Most importantly, GlassUp projects an image onto a lens in front of you, and not on a prism up and to the right of your field of vision, like Glass. The reason for this is that GlassUp aims to provide a different kind of utility t han Glass. It wants to give drivers, joggers, doctors, and even fighter pilots access to information without forcing them to look away — something GlassUp CEO Franceso Giartosio says Google can't deliver.

"When we heard about Glass in spring 2012, we thought we had to close down and go home," says Giartosio, "but we kept on because there were some big differences in our vision. We use the front lens so we aren't asking the user to look to the side — they’re looking forward." Projecting onto the front lens, however, has its costs. GlassUp is only capable of delivering projections of tiny green lettering with no images included. In my tests with the prototype, text was difficult, if not impossible to read, and when I did see the text I was meant to see, it was skewed and nearly illegible. Using the device felt more like visiting the optometrist than throwing on Google Glass. 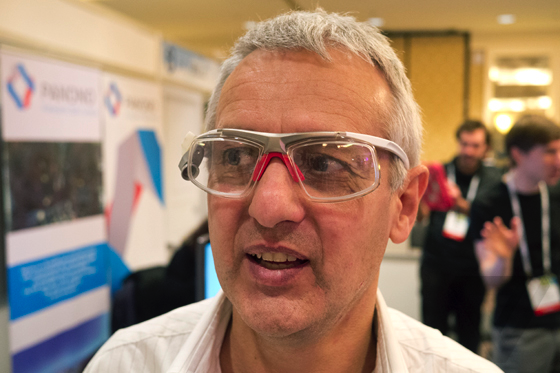 A model of the final version of GlassUp

Giartosio aims to deliver the first version of GlassUp for $399 this summer, but without some more work, the device's final interface won't look anything like the mockups the company has offered (embedded below). I like the idea of only delivering high priority text notifications to a screen in front of, instead of to the side of your face, but GlassUp seems to have a long way to go before accomplishing its goal. Yet, considering that only a few Google Glass competitors even exist, GlassUp is still at the top of the leaderboard, and could deliver a compelling experience at launch. 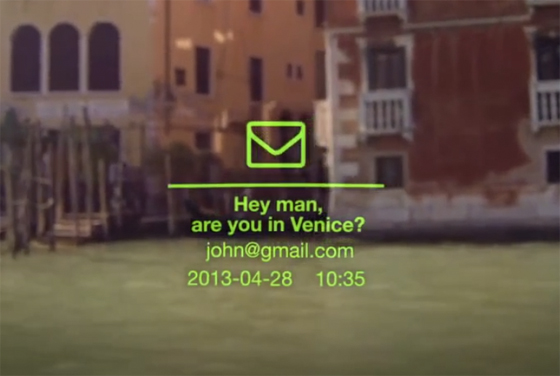 By then, however, we might see Google's latest version of Glass, which could make GlassUp look even further behind. Giartosio admits that Google presents a Goliath-like challenge, but he's content playing David. "Our glass is more like a tool — more like a utility — whereas Google's is more like a game," he says. "They want to do more, while we want to be more basic." He envisions future GlassUp wearers using their specs to monitor their speed while biking down a mountain or checking on an incoming text while they're jogging. The final version of GlassUp, pictured above, looks more like a pair of Oakley sports glasses than Google Glass, in fact, a reflection of Giartosio's decision to focus on physically active users. GlassUp is even working with fighter pilots to develop a similar system, but for the plastic lens on a helmet.

Giartosio is eager to compare Glass with GlassUp, but the two don't seem very similar aside from both being glasses that sit on your face. Giartosio sees GlassUp as more of a utility than as an interactive gadget, displaying information in front of you as you need it without requiring you to look away from your work. Responding to texts or searching for images and directions isn't yet part of the plan, and neither is streaming your vantage point to the web. The only way to interact with GlassUp is by using a touchpad mounted on its right side, or through companion smartphone apps.

We'll have to see if, when the product finally launches, consumers really want a wearable device that's more Volvo than DeLorean.