What happens if you fall asleep in a self-driving car? Audi knows

What happens if you fall asleep in a self-driving car? Audi knows

Audi brought several high-tech car demos to CES this week — as it did last year — including two that took us out into the mean streets of Las Vegas, subject to the whims of rush hour traffic. Fortunately, we had a couple interesting new features making our bumper-to-bumper commutes just a little bit easier.

First, we tested a system that feeds upcoming traffic light data directly into the cockpit. While driving, the next light on your road is indicated in green with a suggested speed next to it — if it says 45mph, for instance, that means you'll make the light if you're going 45. When the light's red or about to turn red, the system indicates how many more seconds you've got before it changes back to green; if the car has a start-stop engine, it'll automatically fire up with five seconds left on the red so that you're not waiting for the engine to spool up when you take your foot off the brake. The goal is to help you make more green lights on surface streets — and when you can't, at least you've got an idea of how long of a wait you're in for.

This is all considerably more complicated than it sounds: many traffic light systems in major cities are "smart," meaning the length of each light is variable depending on traffic conditions. It's also pretty difficult to get the traffic light data from cities in the first place. Audi has worked with Berlin and a few other European cities to run trials, but it could be a long, arduous process to get it broadly; the company says it wants to work with traffic data providers who do the grunt work of aggregating the street light information from cities rather than trying to collect it itself.

But once it does have that data, it feeds it all into a big bank of computers where Audi computes when lights are likely to change based on traffic patterns at different times of day. That gets sent down to the car over its cellular connection, where it gets mapped to GPS and displayed on the instrument cluster. It's a lot of work for a single feature, but I was surprised at how quickly I took to it — this is something that would absolutely make city driving easier.

Next, we took to a self-driving demo with Audi's take on a traffic jam assistant — a slew of sensors and processor power that will take the car over when you're in slow traffic (40mph or under) on the highway. Cars that will detect lane markers and manage your speed in a traffic jam aren't really new, though; what is new is that this car will properly freak out if you fall asleep while it's doing the driving. 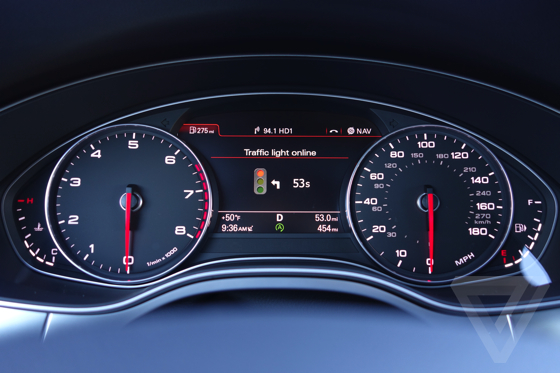 By analyzing traffic light data, one of Audi's demonstration cars can tell you when the next light is going to change.

We took the demonstrator car on the nearby I-15, accompanied by a caravan of other Audis and a police escort. After putting the traffic jam assistant through a few normal tests, our driver closed his eyes; 10 seconds later, a loud buzzer rang through the cabin to get his attention. When that didn't work, the car automatically stopped itself in the middle of the highway — hence the police escort — and turned on its emergency signal. In a real-world situation, it would've also put in a call to 911. The logic is that there's something wrong since the driver is completely unresponsive; the only safe thing to do is stop and call the cops.

If you want to take a nap, take the train

The car uses a series of cameras to make sure the driver is awake, and there's nothing in the system that couldn't be commercialized today. The biggest barrier for autonomous driving at this point might be legislation, a refrain we heard from a number of automakers here at CES this week. The Vienna Convention on Road Traffic, used around the world except in the US and China, has specific provisions that prohibit self-driving. The rules are changing, but it'll take time.

Of course, if the car can drive itself, why does it even matter if you're sleeping? Liability: car makers are insistent that the driver still has final say over the control of the vehicle, regardless of how autonomous they become.

In other words, no naps during rush hour — unless you're taking the train.