Gigabyte gets hilariously serious about an impressively thin gaming laptop

Gigabyte gets hilariously serious about an impressively thin gaming laptop

Razer pioneered the idea of squeezing a gaming laptop into a tiny space, but Gigabyte is about to take it to the next level. The company just announced a new PC gaming hardware brand — Aorus — whose flagship product will put more power into a 0.9-inch thick gaming laptop than we frankly thought was possible.

Perhaps the best part, though, is the company's marketing campaign. Apparently, the computer was inspired by the ancient Egyptians. And then there's this: 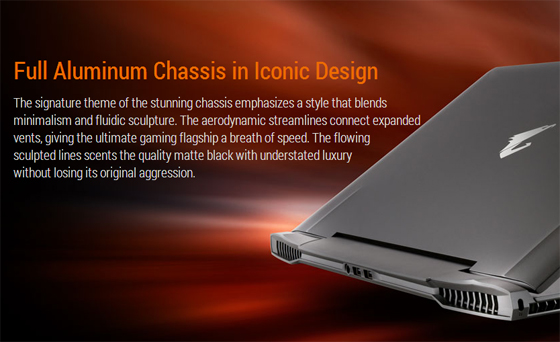 "The glass touchpad with fingerprint-proof coating denotes the commander’s clear vision through chaos and turmoil," writes the company. "The metallic silver eagle badge and 3 molded ridges symbolizing fierce yet rapid attack from high above."

"The metallic silver eagle badge and 3 molded ridges symbolizing fierce yet rapid attack from high above."

In all seriousness, the new 17.3-inch Aorus X7 sounds like an incredible machine. It's about the same thickness as the Razer Blade Pro, but crams in twice the graphical power, with two of the same Nvidia GeForce GTX 765M GPUs as its competitor alongside a quad-core Intel Core i7-4700HQ processor. Two fans, four vents, and five thermal pipes are required to cool all that silicon, and the laptop fits up to a ridiculous 32GB of memory, a pair of 512GB solid state drives and a 1TB hard drive on board. Dual HDMI ports, a Mini DisplayPort and a VGA socket let you hook up three additional monitors alongside its 1080p screen for a panoramic picture. No word on the life of its battery.

There's also a host of game-friendly features like anti-ghosting keys and dedicated macro buttons on the thin backlit keyboard, a Killer networking chip, and 802.11ac Wi-Fi for faster wireless connections.

Gigabyte says it expects the Aorus X7 to ship by March of this year. The company estimates the price will fall between $2,099 and $2,799, depending on the configuration.