Razer tries on wearables with the Nabu smartband

Share All sharing options for: Razer tries on wearables with the Nabu smartband

Every year there are a few obvious trends at CES, and this year wearables are everywhere. We've seen fitness tracker announcements from Sony, Intel, Garmin, and one rather surprising candidate: Razer. Best known for its stylish peripherals and gaming laptops, the company is jumping into the fray with a smartwatch and tracking band mash-up called the Razer Nabu. It's a stylish band that melds smartphone notifications with a suite of fitness-tracking features, but unlike its competitors — who focus primarily on all-in-one turnkey solutions — Razer is hoping third-party developers will take the reins and turn the Nabu into a full-fledged platform.

"We've been working on the Nabu band for about three and half years," says Razer CEO Min-Liang Tan. "So we've looked at everything from smartwatches to fitness bands along the way, and we were pretty unhappy with the state of things." Smartwatches often suffer from mediocre battery life, he says, while fitness bands have a hard time retaining users after the honeymoon period ends. Razer's approach was to think of the device in broader terms: less of a single-use device, and more of a lifestyle-focused accessory. 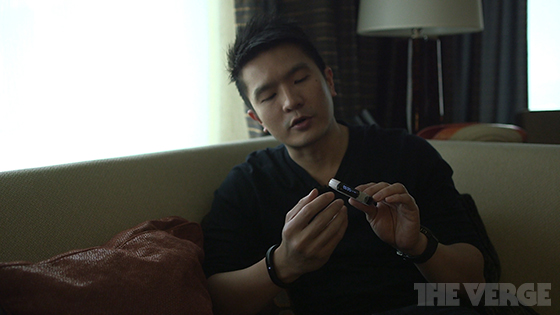 On the outside, the Nabu's biggest differentiating feature is the inclusion of two OLED screens (despite the dual displays, Razer says the device will achieve between seven and ten days of battery life). The smaller screen on the outside of your arm lights up with icons for emails or calls, for example, letting you know when you have a notification. The larger "private" screen is on the inside of your arm, and displays the name of the caller or specific details on the notification. It's a thoughtful approach: people you're talking to at the dinner table may know you're getting a phone call, but only you will know whom it's from.

The device will work with both iOS and Android phones over Bluetooth Low Energy, and Tan says any notification that a phone displays can be surfaced on the Nabu. It also contains an accelerometer and altimeter for counting steps walked, stairs climbed, and for tracking your sleep. That feature lineup is pretty much table stakes in the fitness tracking market at this point, but it's the uses that haven't even been dreamt up yet that Razer is betting will really set the Nabu apart.

"We're opening up all this information."

"We're opening up all this information, all this data — subject of course to the user's permission — to developers out there. So first-party and third-party developers can now use all this data that they didn't have access to before." Whether it's the steps you've taken or the locations you've visited, all of the data collected by the Nabu is synced back to a user's smartphone via a Razer utility app, at which point developers can work with it all.

While many similar products have APIs, access is usually limited to reading or modifying data from a user's account rather than keying off the device itself. It opens up a realm of possibilities, particularly considering that one Nabu band will be able to talk to another. Using a set of predefined gestures — such as a handshake — users could share information or add each other over a social network. While the company will be releasing its own apps for sleep and fitness, it's otherwise an accessory-style approach, with Razer providing the device that collects the information, but letting developers out there find clever and exciting uses for it.

Of course, that only matters if the device itself is fantastic, and it was hard to get a sense of the final product from the early prototype we saw. The design was minimalist and unobtrusive, the twin screens fading into the black band when not in use, but in terms of functionality things were rather spotty. It was running with an alpha version of the smartphone app, we were told, and the Nabu wouldn't reliably connect. The OLED displays also weren't as effective as we'd hoped; while the icon notifications were nice and clear, the text on the private screen was tiny and required some squinting to make out the messages.

Razer will have time to iron out those kinks, however. It plans on selling the device in the months ahead for $49 — but only to developers. That will give the company time to drum up support and make sure there are apps that take advantage of the Nabu when the consumer version launches later this year at a slightly higher (and unannounced) price.

Either way, Razer is heading into a hotly contested market segment with some established competitors, but the company is hoping it can leverage its own pair of secret weapons against the Nikes of the world: gamers and game developers. He describes a scenario where a gamer could be driving home, and an online game — aware of his location through the Nabu — could send him a message asking him to join in when he arrives home. "Or for that matter, if they can see he's meeting his guild mates in real life, and send him cool stuff along the way. That's the stuff we're really, really excited about."