Spec Sheet: the wearables of CES 2014

Spec Sheet: the wearables of CES 2014

Wearables are everywhere. It's hard to find a big technology company at CES this year that isn't unveiling a gadget that straps a sensor or a display to your body in one way or another. The idea is nothing new, but we're seeing companies start to make more of them, in more forms, that can perform more functions. To see exactly what these manufacturers are turning their wearables into, we're looking across some of the most exciting, intriguing, and gorgeous products that have been announced so far. 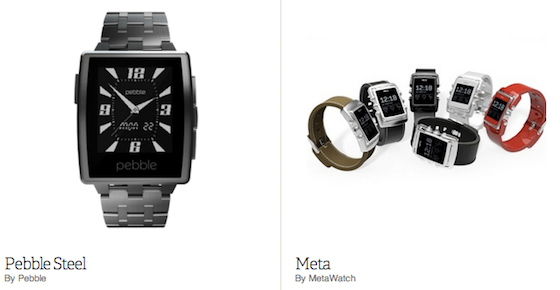 What wearables enthusiasts will be most happy to see is the emergence of increasingly premium smartwatches. Both Pebble and MetaWatch have unveiled new designs this year that are highlighted by strong, industrial-metal styles. They're both huge steps up from their former plastic builds, and they bring smartwatches ever closer to matching up with the quality of analog watches.

Smartwatches are turning into beautiful accessories

Pebble's Steel and MetaWatch's Meta probably aren't the smartwatches that will open the product category up to the masses, though. They're still fairly involved products underneath, and they're still only as smart as what you connect them too. But the important change is that they no longer look like early, emerging products — they finally have the polish of something worthy of being worn on your wrist all day, and that's an important step forward for the devices at the forefront of the wearable category.

Click above for full specs on all six trackers.

But as Pebble and MetaWatch step up their wearable game, plenty of others are just stepping into it. LG, Garmin, Razer, and others are unveiling fitness trackers at this CES. They're all stylish — if basic — products with surprisingly robust feature sets for being so new, from their ability to display biometrics to the inclusion of their own companion apps. They're starting to do a lot more than just track how far you've walked, as well: a number of new fitness trackers, including Razer's and LG's, have taken some inspiration from smartwatches and can now also display smartphone notifications.

It isn't really wearables that are everywhere: it's sensors

It isn't simply wearables that are exploding in popularity though — it's sensors. From motion trackers to heart-rate monitors to UV-ray detectors, manufacturers have been taking these increasingly small and affordable sensors and building them into simple, often single-purpose products. Neatamo's June sunlight detector is one of the best examples: the device looks just like a bracelet — with barely any sign that it's actually something more — yet it's able to pair with an iPhone to tell its wearer if they're getting too much sun and recommend what SPF sunscreen to wear.

Sony takes the idea even further. It introduced the Core fitness tracker yesterday, but the Core is a lot more than something you strap around your wrist or clip to your belt. Sony is viewing the Core as a bundle of sensors that can be repurposed over and over again. Right now it's a fitness tracker, but Sony eventually wants its technology to be put inside of smartphones and other hardware, giving manufacturers an easy way to add sensors that can let hardware learn about the world around it.

So while most wearables haven't necessarily gotten better just yet, they're on their way toward being able to do more and more with ease. That's exactly what we're seeing here as manufacturers start bundling trackers and sensors into everything from headphones to bracelets, and it shouldn't be long until one device can do it all — and look good while doing it.

More from this stream The best wearables of CES 2014