This is the real CES

Share All sharing options for: This is the real CES

"If you want to make something happen, it's gotta happen off the floor," the product rep tells me.

We're off the floor when he says it, on our way up two dozen stories to a private suite where his company has built a full booth — complete with floor-to-ceiling product racks — to entertain buyers and hopefully make a few sales. They'll spend the week here, wining and dining, trying to make deals, often late into the night. "I was with buyers until 5AM this morning," the rep says. He doesn't seem tired, or not in the usual way.

As the elevator goes up, more of the story comes out. He was at the tables, lending $100 chips to a heavyweight retail buyer with a taste for poker. It wasn't until five that he got the purchase order he needed and headed off to bed, only to be roused three hours later by a wake-up call for his 8:30 meeting. In other words, he was working. "I did not go to sleep last night,” he says. “I lost and regained consciousness."

He is talking very fast.

This is the other CES, the one most people never see. While the press is writing about the latest curved TVs and smartwatches, more than 30,000 people — a fifth of the attendees — are from buying organizations, walking the halls with commerce on their minds. Component manufacturers are looking for partners, bigger companies are looking for white-label suppliers, and retail buyers are looking for a hot new product they can lock down for an in-store exclusive. If you've got a green badge from Best Buy or JC Penney, you can move through CES like a Sumerian warlord.

While the rest of us are looking for the new and the weird, the buyers are doing business

Lukas Thoms is a buyer from Grand St., a startup that specializes in weird, small-scale hardware. Thoms’ job is to find the hardware that Grand St. wants to sell and make the deals to get it on the site. Since Grand St. is fairly small Thoms doesn’t comp any late-night poker binges, but he's still playing for the same pool of products as giants like Walmart and Target. Buyers like Thoms will leave CES with a stack of business cards and, for the really lucky ones, a few purchase orders ready for fulfillment. Getting there takes a lot of schmoozing, a careful dance of hard and soft sells. While the rest of us are looking for the new and the weird, the buyers are doing business. 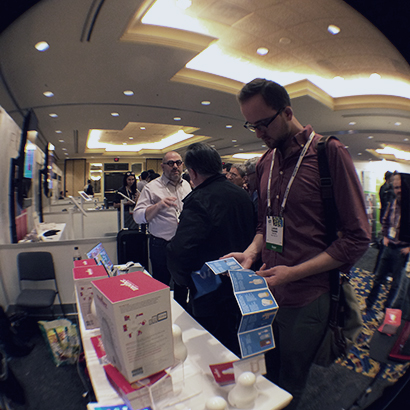 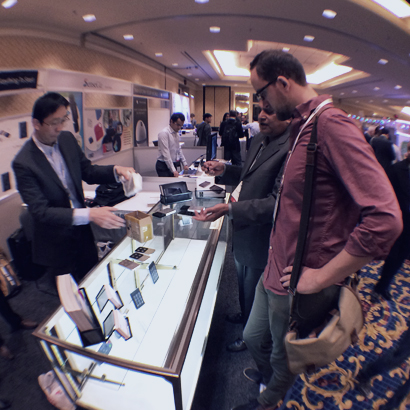 Thoms starts at the conference floor of the Venetian hotel, an offshoot from the main convention center where the cheaper booths attract a more indie crowd. He will spend all day here, sifting through a few hundred booths and hoping to come away with roughly 50 business cards to follow up on. About half of those products will eventually be sold on Grand St. The company is trying to feature a new product every day — a particularly hard trick since they won't run the same product more than once — but the site has to stay choosy or there's no point. Thoms walks the floor, past booths for toy drones and a water-cooler-sized glasses cleaner.

"There's the gut reaction. I see it and it's cool. That's the first test,” he says. Of course, it also has to fit the Grand St. aesthetic and make sense for his customers. And the company has to be able to sell it at a margin that makes money. The products also have to actually work — not a sure thing in the age of Kickstarter and Arduino. "A lot of stuff here just isn't ready to be sold, and we have to make the call on that." It's a wonder they can sell anything at all.

"Lukas!" The call comes from the Power Practical booth. The company, based in Salt Lake City, is finishing up a long run selling personal power packs on Grand St. They've been emailing with Lukas for months. "I have an email to show you," Lukas says. It's from a happy customer expressing his affection in a unique way: he’s invited everyone trout fishing. He passes around his phone to a wave of laughter. He shakes hands, and a minute later he’s walking again. That will probably be the only time they see each other all year.

There are a lot of color-changing lights this year, a cool product that’s fallen prey to bad timing. Grand St. had a big hit this year with Nanoleaf, a $40 lightbulb made out of LEDs, but with the color-changing Philips Hue on the shelves at every Apple store, an app-enabled light bulb is old news to most of Grand St.'s customers, even if they might not even be selling that well. Without numbers from Apple, it's hard to say.

Lukas walks up to a speaker booth staffed by an older man in a suit. "Have you ever seen an invisible speaker?" he asks, then stops himself theatrically. "Or should I say… have you ever not seen one?" It’s classic Vegas, but Lukas has to be especially careful with speakers, since there are so many. He holds this one up to his ear, trying to get an audio profile over the noise of the hall.

As we walk away, Lukas looks at me and shakes his head. The bass response was too muddy, especially for that price point. He probably won't even call it in for testing.

"As a businessman, electronics is the last business I would want to be in. You'd do better selling T-shirts." 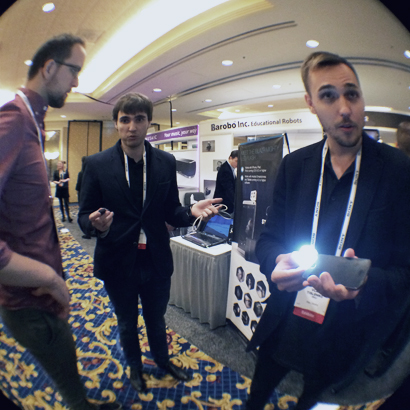 In many ways, consumer electronics isn't the best business to be buying for. If you buy a set of dinner plates at Target, roughly half of your money will go to the store — but if you buy a flat-screen TV in the same store, the store's cut could be as low as 5 percent. Grand St. is all online so it doesn’t have to pay rent on a storefront, but it has to deal with variable costs for storage, packaging, and shipping, the endless shuffle of crates between factory and warehouse. "As a businessman, electronics is the last business I would want to be in. You'd do better selling T-shirts," he tells me over lunch, a pre-packaged sandwich from the kiosk upstairs. "But we love it."

Grand St. is a big believer in the new hardware renaissance, spurred on by rapid prototyping systems and open standards like Bluetooth 4.0. Suddenly, if you want to make a hand-tooled, custom-colored bike speaker, you can assemble it yourself and make back your money selling it online. (It’s called MyBell, and it has been with Grand St. since the beta.) But while the company's heart is with the weird ones, the most reliable sellers are simple things like cables and battery packs. Thoms’ favorite stuff from the show so far has a bit of both, like a PowerCube or the massive E Ink clock. "It's the commodity stuff we stay away from. TVs. Headphones is a battle I fight every day."

Lukas stops by the booth for a home-security camera with some interesting connectivity features. The staffers manning the booth have been on their feet all day, but Thoms charms them. He poses for pictures in the corner of the booth, holding up the demo unit like a cocktail shaker. On the way out, we cross paths with another green badge who's gossiping with someone from the non-demo part of the team. "That's an Apple buyer," Lukas tells me. He doesn’t look pleased.

Did he just get outflanked? It’s hard to say. Most likely, we won’t know until the deals start to get hashed out over email, next week at the earliest. "I think it's a next-level brilliant product, but they're probably going to sign with Apple,” he says. “If they go that route, then they probably can’t go with us.” But even then, there are angles to play. Maybe he can lock in an earlier ship date, ordering hundreds of units while the manufacturers are still working up to the tens of thousands that Apple will ask for. Maybe the Apple deal will fall through, and he'll be there to salvage their year with a last-minute order.

And even if he can't, there's always the next booth.