Nuance's future of gadgets that listen to you is fun, but frustrating

Nuance's future of gadgets that listen to you is fun, but frustrating

It used to be a strange idea to talk to an inanimate object, something companies like Google and Apple are making normal. Gone is the pain of pecking away at screens and digging through pages of menus, which has been replaced by simple voice commands.

But you can't mention those two tech giants without Nuance, the voice-services company. It specializes in turning what you say into text on your computer or mobile device, and sometimes it does that by sending your words to a server farm miles away. In return, it chews up what you say and spits out responses that devices can turn into actions.

The next step is taking that same technology from computers and phones and bringing it to all sorts of products, even ones you wouldn't think to use it on. At this year's CES in Las Vegas, that's smartwatches, cars, televisions, and more. How well do they work? I test drove brand-new and updated voice tools for smartwatches, computers, and a TV set-top box, all with mixed results. When it worked, it was amazing. And when it failed, it was infinitely frustrating.

The newest and most temperamental of the bunch was a version of Dragon Assistant for the Omate Android-powered smartwatch, a product that raised over a million dollars on Kickstarter last year. Like Google's search for smartphones and Glass, Nuance's app works quietly in the background, waiting for you to say "Hey Dragon." Speaking commands pulls up widgets for the weather, and can even pick up and identify what song is playing using technology from recent Sony spin-off Gracenote.

Turn the lights off, watch

Nuance has also set it up to work with some third-party tools like Phillips Hue lighting system. I tried turning the lights on and off and changing colors by simply talking into the watch, something that normally requires a standalone app. Instead, Nuance's app lets you just lift up your watch and say "Hey Dragon, change the lights to blue." This didn't work very well, either misidentifying commands for "light" to "like" (for Facebook), or having connection issues, something that was chalked up to bad Wi-Fi in our demo room. This was just on the watch though; the general idea behind it could work on all sorts of devices with a microphone and Nuance's software. 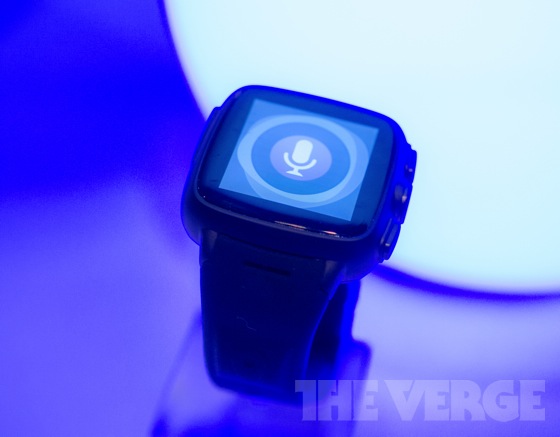 More steady but still disappointing was Swype for smartwatches. Nuance bought the virtual keyboard company three years ago, and has managed to shrink it down to fit on tiny screens. This was better in theory than in practice. I attempted scribbling out sentences on a version of the app running on a Samsung Galaxy Gear smartwatch, and failed again and again at trying to knock out a sentence without having to go back and make edits. The small screen also left little room to see much of what you're writing.

Swype has always had a learning curve, even when you're sliding across a roomy smartphone keyboard. It's remarkably harder when that same keyboard is shrunk down to fit on a 1.67-inch display. To Nuance's credit, Swype is faster and easier here than pecking on that same keyboard with a single finger. 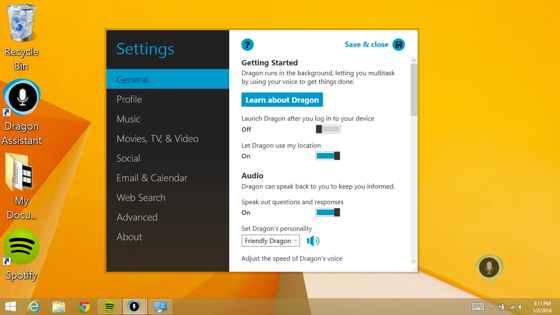 A few years ago you wouldn't expect to see voice apps on a computer, but tablets have changed that. Nuance's answer is a new version of its Dragon Assistant app that — using technology from Intel — constantly listens for you to say "Hey Dragon," just like on the watch. When you do, simple questions or responses launch apps on your desktop. Others come up inside a hovering sidebar, similar to Google's mobile search and Apple's Siri.

This software isn't a new thing for Nuance, but the company is trying to make the process more personalized, and it says it's now better at capturing complex questions and turning them into near-immediate answers. That means you can tell your computer to "find the best Thai restaurant in Las Vegas," "find me a flight to Wichita that leaves in two days," or ask "how long ago was 1994?" instead of having it (or you) plug that into a search engine. Nuance routes those questions through Wolfram Alpha, Yelp, Expedia, and other services to figure out the best answer for your type of question. It's even hooked into Spotify so that you can ask to hear a certain song or artist.

In your living room

Where Nuance could make the biggest dent is in TVs, something that's relied on remote controls to navigate for the past 64 years. The company's two-year-old Dragon TV technology is an attempt to change that, converting voice commands to TV actions. That started out with channel changing and looking up programs, and it can now recognize who you are based on your voice. That means you can have several people in the same household who have different favorite programs or other settings, while remotes with microphones or active listening devices can tell who's who.

The setup for this new recognition feature turned out to be very simple. You just repeat a short sample phrase into a remote three times. It's the same for the Omate smartwatch, and Nuance says that's all it takes to figure out who you are from someone else. After that I was able to say "go to my home screen" and see a selection of programs and channels I theoretically set up at an earlier point.

This demo TV system I played with isn't actually something Nuance sells directly to consumers, but instead to companies that make TVs and set-top boxes. For example, DirectTV tapped Nuance to add voice features to its mobile app, which lets you voice commands into a phone or tablet.

Among all the things I tried, some are ready and some are not. The TV technology that recognizes you is available to TV and set-top box makers, as is Dragon's assistant for PCs, though it needs new hardware from Dell, HP, Acer, and Lenovo introduced here at the show. There's no date or hint at when smartwatches will get the Swype keyboard, or the Dragon assistant app. And maybe that's one of the most frustrating things about Nuance: some of these things seem tantalizingly close, but you might need to rely on other companies to build it into their products. In other words, all these things let you talk to the future, but we can't quite hear it yet.