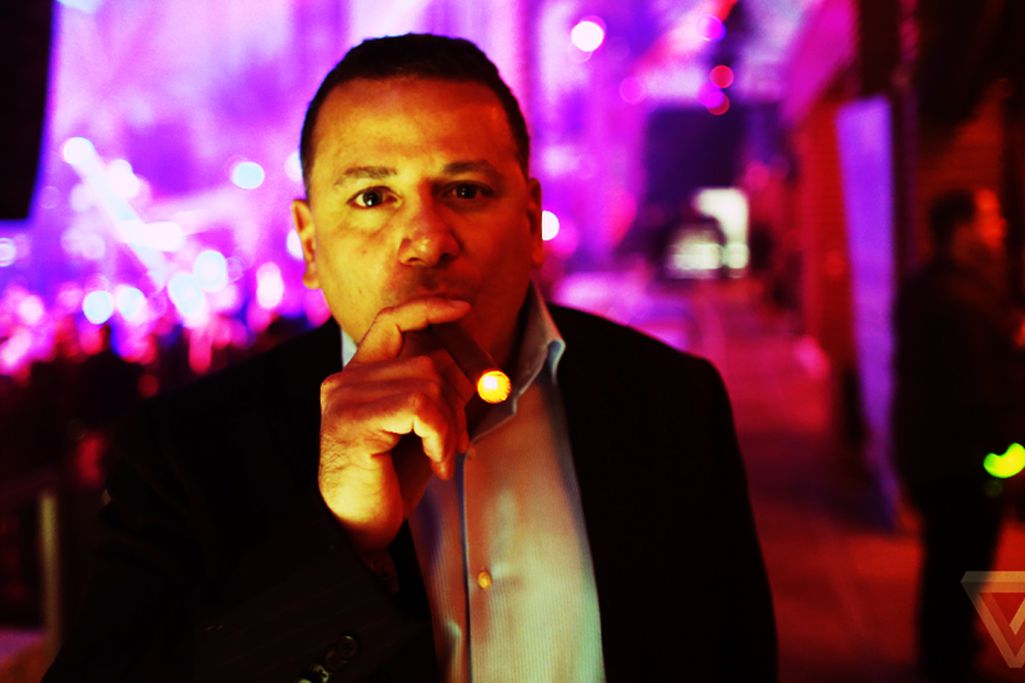 The pool deck at the Marquee, a $1,500 bottle-service club at the Cosmopolitan hotel, is lined by cabanas heated by lamps and jacuzzis with walls made of plexiglass. On the first night of CES, the consumer electronics show that overtakes Las Vegas every January, a much more average-looking crowd than usual sat uncomfortably on the all-white furniture, dressed in business casual and puffing on e-cigs with glowing orange tips.

Kevin Frija, the CEO of Vapor Corp, which sponsored the decadent scene, pulled on an e-cigar at the back of the party and encouraged his employees to pass out chocolate- and coffee-flavored e-hookahs. “Vaping is one of those new disruptive technologies that could very well overtake the tobacco business and tobacco companies,” he tells The Verge.

The swagger is not unwarranted. E-cig sales more than doubled in 2013, even though the health impacts are still being debated. The Food and Drug Administration’s regulations on e-cigs are expected to come any day now, but the industry isn’t waiting. The products are improving rapidly as e-cig-makers begin to act more like technology companies, outfitting their devices with microprocessors, Bluetooth, fingerprint scanners, and soon, gyroscopes.


Last year at CES, e-cigs were represented by Chinese manufacturers peddling white-label cylinders from the obscure corner where the show stuffs all its D-grade wares. The Shenzhen companies selling disposables with knockoff Playboy logos can still be found, but this year, things are different. Most notably, the vaping division of RJ Reynolds, one of the largest tobacco companies in the country, rented a prominent spot in the convention center for the first time.

"Vaping is one of those new disruptive technologies that could very well overtake the tobacco business."

RJ Reynolds Vapor Company has one product right now: VUSE, a silver-and-black stick that comes in regular and menthol. It’s for sale only in Colorado, where it is the most popular e-cig on the market, but the company plans to start selling it in the rest of the country by mid-year. Because there are no restrictions on advertising for e-cigs yet the way there is for tobacco, RJ Reynolds has launched a TV ad campaign for VUSE.

VUSE has a microprocessor and memory chip that adjusts battery output in order to ensure consistent heat and vapor, the company says, resulting in "the perfect puff" every time. The device also detects when the cartridge is low on liquid, flashing its white light to let you know it’s time to refill.

There are other e-cigs with similar features, especially in the independent and do-it-yourself vaping scene, but VUSE is an elegant execution for the masses. It feels... civilized. It’s hard to imagine why anyone would prefer the stink, ash, and tooth staining of paper cigarettes when something like this is an option.

"I do see and believe that e-cigarettes will over time start replacing the cigarette," says Stephanie Cordisco, president of RJ Reynolds Vaping Company. "Ultimately that’s our vision: to transform tobacco. VUSE was designed to help smokers permanently switch."

RJ Reynolds isn’t the only big tobacco company betting on e-cigs. Lorillard, which owns Newport, acquired the Blu brand in April of 2012. Altria, which owns Philip Morris, joined the party this summer with its MarkTen line of e-cigs. And just because the big players are entering doesn’t mean the scrappy startups are going to disappear. Companies like NJOY are aggressively expanding their tiny empires. 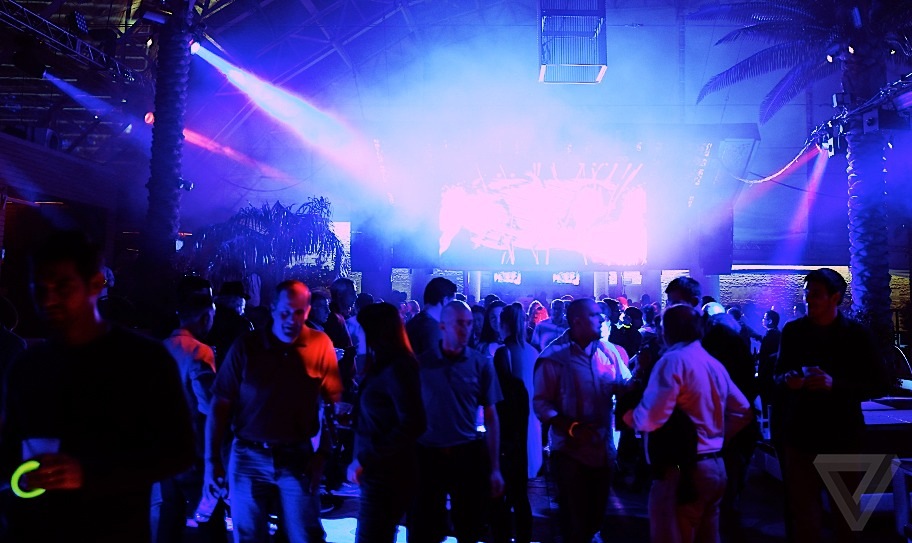 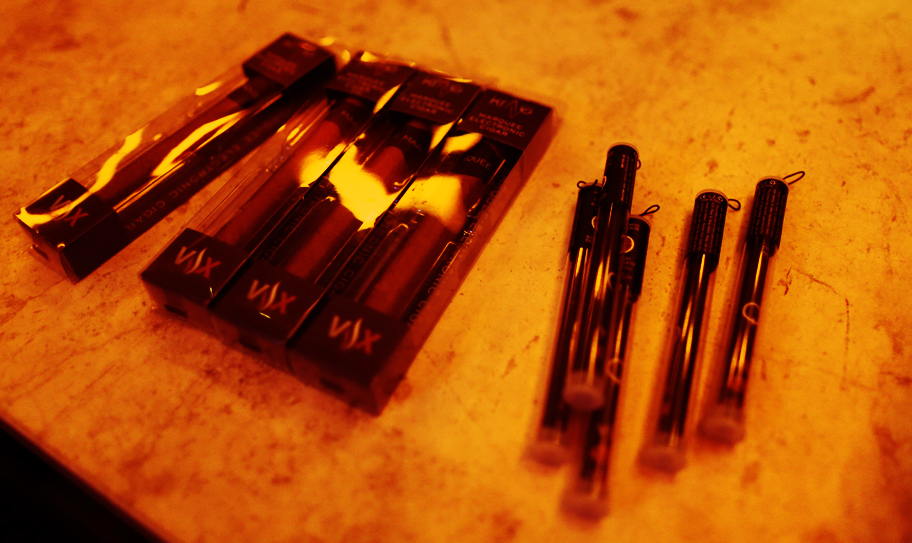 In the early days, e-cigs merely attempted to simulate smoking; that’s no longer the case

In the early days, e-cigs merely attempted to simulate smoking. That’s no longer the case. The e-cig of the future may look nothing like a paper cigarette, and will likely be very different from the e-cigs of today. The big players in the industry are working on an experience that is better than smoking. Future e-cigs will be Bluetooth-enabled so that only the owner can use them, while tracking personal statistics on usage and nicotine levels (one early effort is Smokio, the "connected electronic cigarette"). RJ Reynolds is exploring the possibility of adding tiny gyroscopes in order to enable gesture recognition. Vapor Corp introduced a prototype vaporizer that doesn’t work until it’s unlocked with a fingerprint scan, so the kids can’t vape while mom and dad are away.

"When it first came out of China, it was just a simple battery tied to a heater," says Fred Ampolini, vice president of RJ Reynolds Vaping Company. "And unfortunately, that left the consumer behind, but there is so much more you can do with it to deliver that perfect smoking experience that adult consumers want."

This is just the start of the changes coming to the e-cig industry. We can expect that rate of change to accelerate once regulations are cleared up. That may take a while, however, as individual states decide what they think of this new technology. For example, New York City banned vaping in public places shortly after it got its first vaping lounge. 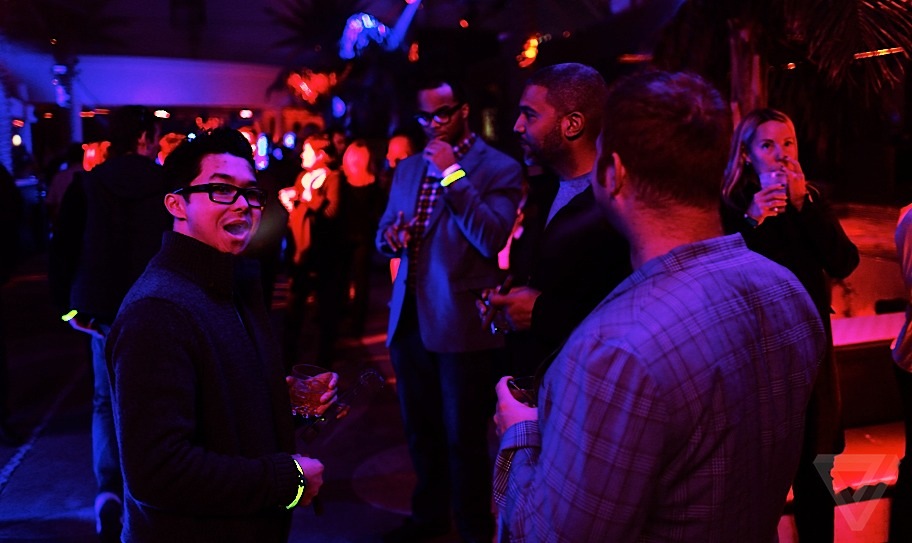 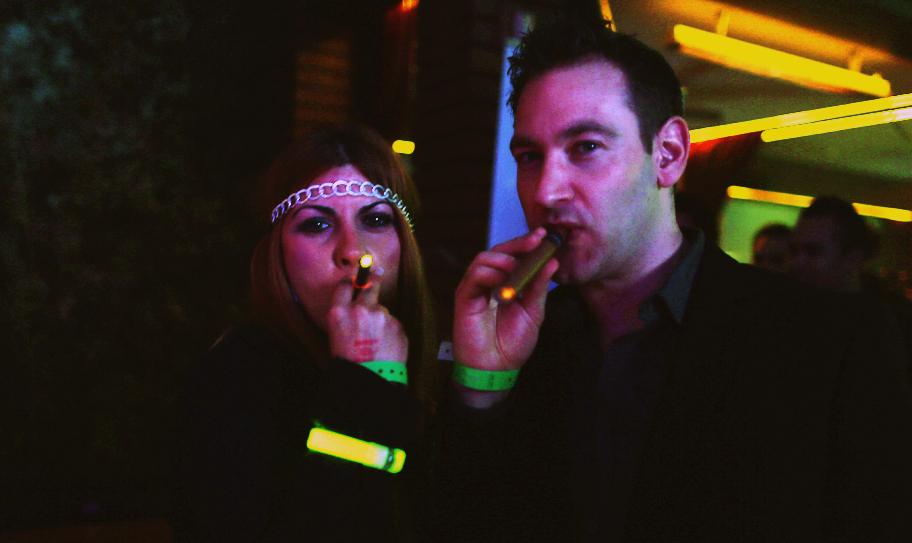 There are still lots of unanswered questions about e-cigs. The average e-smoker has no idea what chemicals are in the liquid that contains gets vaporized and delivered into their lungs, for example. The uncertainty hasn’t stopped people from vaping, however. We saw plenty of CES attendees tugging on their NJOYs while wandering the floor or standing in line for the bathroom even though vaping is technically forbidden in the convention center.

"We’re seeing this e-cigarette category grow exponentially," Cordisco says. "It’s already a $1.8 billion industry and it just really came here and started in the US in 2007. This inflection point with e-cigs is really reflective of adult smokers’ desire to look for alternatives that are a better fit with the 21st century."

You can say e-cigs are dorky, but they are undeniably modern-looking. The party at the Marquee, where e-cig lights flickered across the dance floor, was like a scene from the future — the not-too-distant one.