It wouldn't be CES without manufacturers showcasing some of the nicest TVs in the world. This year, those TVs have a few big focuses: gigantic sizes, curved displays, and 4K. While these sets are often about proving companies' abilities more than building actual products for consumers to buy, that isn't entirely the case this year. A few of this CES' most interesting and best-looking TV sets are headed to market, and others are making 4K more affordable than ever. 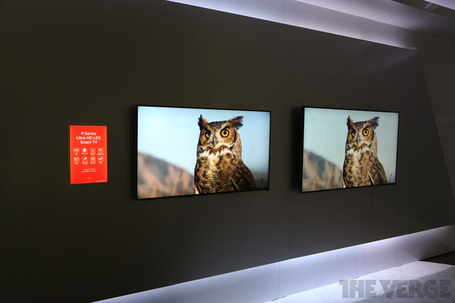 Inexpensive, but far from cheap

Nowhere is that last item more evident than Vizio, which unveiled a 4K TV for $999.99 this week. It's easy to assume that such a low-cost set wouldn't be very good, but Vizio blows away all expectations for its price level, delivering a fantastic picture and smart TV features in a set interested consumers can — and probably will — consider buying.

There are other 4K sets at and even below that price — including one from Polaroid — but none that you'd really want to look at. As for what makes the difference between these sets is hard to say, as most companies haven't released full specs on their TV sets yet. But it seems that rather than cutting corners to get to such a low price, Vizio has made something of a preemptive strike against the gorgeous sets by Sony, Samsung, LG, and others, which are slowly making their way down in price. Those companies' inexpensive sets are still around $3,000, but the good news is they'll have to make a stand against Vizio soon. 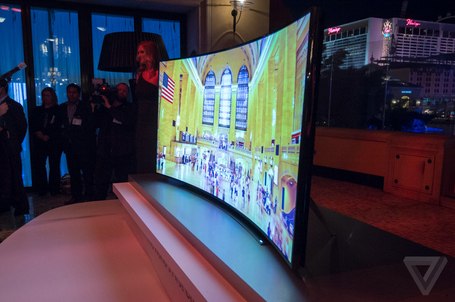 While those companies may not be focused on price, they have been displaying some of the wildest TVs of the show. At Panasonic's booth, a series of curving 4K televisions are snaking along a wall, bulging in and out across their adjacent 55-inch panels. Sony, on the other hand, is one of the few manufacturers that isn't showcasing its curves. It's instead made a series of its 4K and HDTVs with thicker "wedge" designs, the sides of which are wide at the bottom and taper in depth as they rise, adding in enough room to include far more capable speakers than you'd normally find in a TV.

Most manufactures are focusing on curved displays though, and some aren't even letting it stand at just that. Samsung and LG are both showcasing sets that can alter their curve with the press of a button, letting owners increase the display's bend or even pull it back into a flat panel.

Those two "flexible" TVs have one other thing in common: they're downright huge. Both TVs have 105-inch displays along with the imposing presence you would expect them to bring. Unlike most HDTVs though, they use the wider 21:9 aspect ratio — a style that can be good for watching movies, but doesn't work quite as well for TV shows.

Samsung's set isn't just a tech demo. It's actually going to put a smaller, 85-inch model of it on sale. Samsung hasn't announced a price for the TV yet — though it's safe to assume that most of us won't be able to afford it — but it says the set will be available in the second half of the year.

Whether viewers actually want 105-inch TVs and curving displays is another question, but there's no doubt that manufacturers are going to keep making them until they find out. For now, Sony's surprising wedge design and Vizio's low-cost 4K set will matter a lot more to buyers — those sets change what the average TV looks like, and only in ways that offer clear-cut improvements.

More from this stream The best TVs of CES 2014