The Fitbit Force is about to become a little bit smarter than your typical fitness tracker. This February, an update to Fitbit's software will allow the band to notify iPhone owners of incoming calls, vibrating to alert them and displaying the caller's name right on its tiny display. You might not think there was even enough space on its screen to show a caller's name, but it displays them in a small, readable font, and scrolls everything that it can't fit.

A simple, but hugely helpful alert

It's a surprisingly natural and helpful addition to the band that brings one of smartwatches' best features to a far simpler device. It worked without issue when we saw it in action, immediately displaying an incoming call once a paired iPhone received it. The Force's caller ID will only be available on the iPhone for now, but Fitbit tells us that it wants to bring the feature to Android too. Once it arrives, it's easy to imagine that anyone whose phone stays in a bag most of the day will appreciate the simple alerts.

While Android owners have to wait on caller ID, the Force itself is launching support for a dozen more Android devices. It now syncs with a number of major products from Google, Motorola, HTC, and LG, including the current and previous generation of Droid devices, the Nexus 4 and 5, and this year's Nexus 7 tablet. The Moto X, HTC One, and LG G2 are gaining support as well, and with major Samsung phones already supported, Fitbit now has all of the biggest Android phones covered. 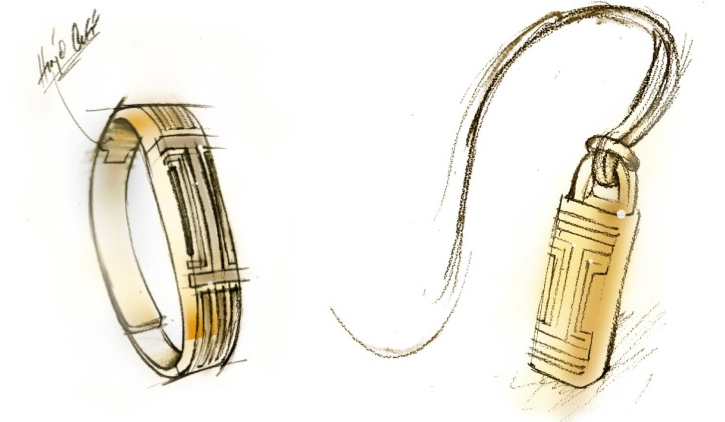 Fitbit's Flex is also turning into a little more than a fitness tracker by way of some stylish new accessories. Fitbit is partnering with fashion designer Tory Birch to produce a collection of wristbands and bracelets that can transform the Flex — which is really just a tiny sensor wrapped in a wristband — into a beautiful piece of jewelry.

New accessories will turn the Flex into jewelry

Don't expect simple plastic builds like on the Flex's current housing though: Fitbit wants to see the Flex incorporated into fashionable necklaces and bracelets, and they'll likely debut looking a lot more like a style accessory than a motion tracker. Early sketches of the pendant and wristband by Birch have been published (above), but we won't see the final products until closer to their release this spring.

Fitbit knows that turning its products into more than simple fitness trackers is going to be a key to success going forward, especially now that simple iPhone apps — including Fitbit's own — can emulate many of its tracker's features for free. Caller ID on the Force and the Flex's optional transformation into jewelry are beginning to do just that.