You no longer need someone's email address to send them an email. At least, that will soon be the case if you want to email another Google+ user. A new Gmail "feature" will let you simply type in anyone's name into Gmail's "to" field and send them an email. Google announced the new Google+ integration on its Gmail blog today, but company representatives have clarified to The Verge that — by default — anyone on its social network will be able to send messages to your Gmail inbox. 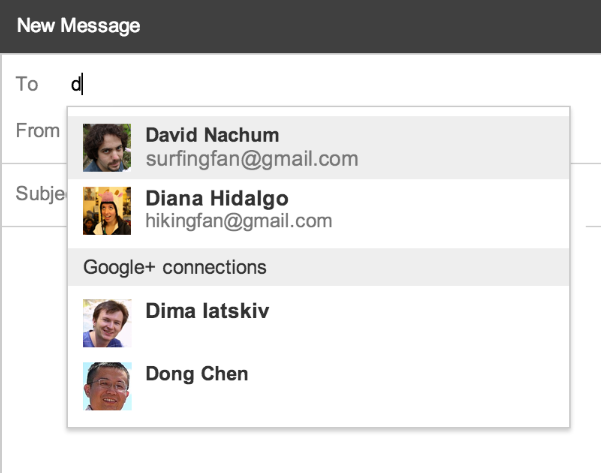 Once the service goes live over the next few days, a new setting will appear in Gmail called "Email via Google+." If you don't want everyone on Google+ to be able to send you an email, you'll have to opt out by selecting "no one" or choosing another option to limit the feature to people in certain circles. It's important to note that even if you do let people send you emails through their Google+ connection, your actual email address won't be revealed unless you choose to respond to the email. Google also says that emails from Google+ users outside of your circles will not hit your "primary" inbox — they'll be placed in the new "social" tab it introduced earlier this year. The change continues the company's push to integrate Google+ with the rest of its popular online services, but it's concerning as it turns a private space — your inbox — into a social one.

The new feature — and the guaranteed controversy to follow — is reminiscent of the company's attitude towards its failed Buzz social network. The service was opt-out only and led to backlash and ultimately a class-action lawsuit. Notably, the feature itself would be helpful if it was opt in; it'd provide an easy way to allow those you've added to your circles to contact you even if you haven't yet exchanged email addresses. By making this an opt-out feature, it seems that Google wants to challenge Facebook's dominance in communication: the preeminent social network has effectively made email addresses less important.

A Google representative tells The Verge that while the setting itself is rolling out over the next couple of days, the ability to send emails via Google+ will not be enabled until a later date. When the company does turn on the feature it'll send emails to Gmail users letting them know of the change.

Update: This article has been heavily modified from its original version with clarification from Google that the feature will be opt-out.