Apple and retail partners prepare for launch of Apple Pay

Apple and retail partners prepare for launch of Apple Pay

It's almost time to start paying for things with your iPhone 6 instead of plastic. Last month, Apple said its Apple Pay mobile payments service would launch in October, and new information suggests that the anticipated debut is fast approaching. 9to5Mac reports that Apple is preparing its retail staff ahead of Apple Pay's arrival with mandatory one-hour training sessions. Leaked training materials reveal some new details on just how Apple Pay will work; Apple Pay is bundled in with the Passbook app — which we already knew — and you'll be able to store up to 8 credit cards with Apple. You can use any card Apple already has on file for your iTunes account, or scan in new payment methods using the iPhone's camera.

Since Apple Pay and mobile payments in general will mark unfamiliar territory for many consumers, the company is making it extremely simple to review recent transactions made with an iPhone over NFC. And if you spot anything wrong, getting in touch with your bank takes just a tap, according to the screenshots. (Progressing through your bank's awful customer support phone line will likely be the harder part.) Another perk of Apple's close business relationship with finance partners: when your credit card expires, your replacement card's information will be automatically be pushed to Passbook without any need to re-enter numbers or take another picture to keep things up to date. 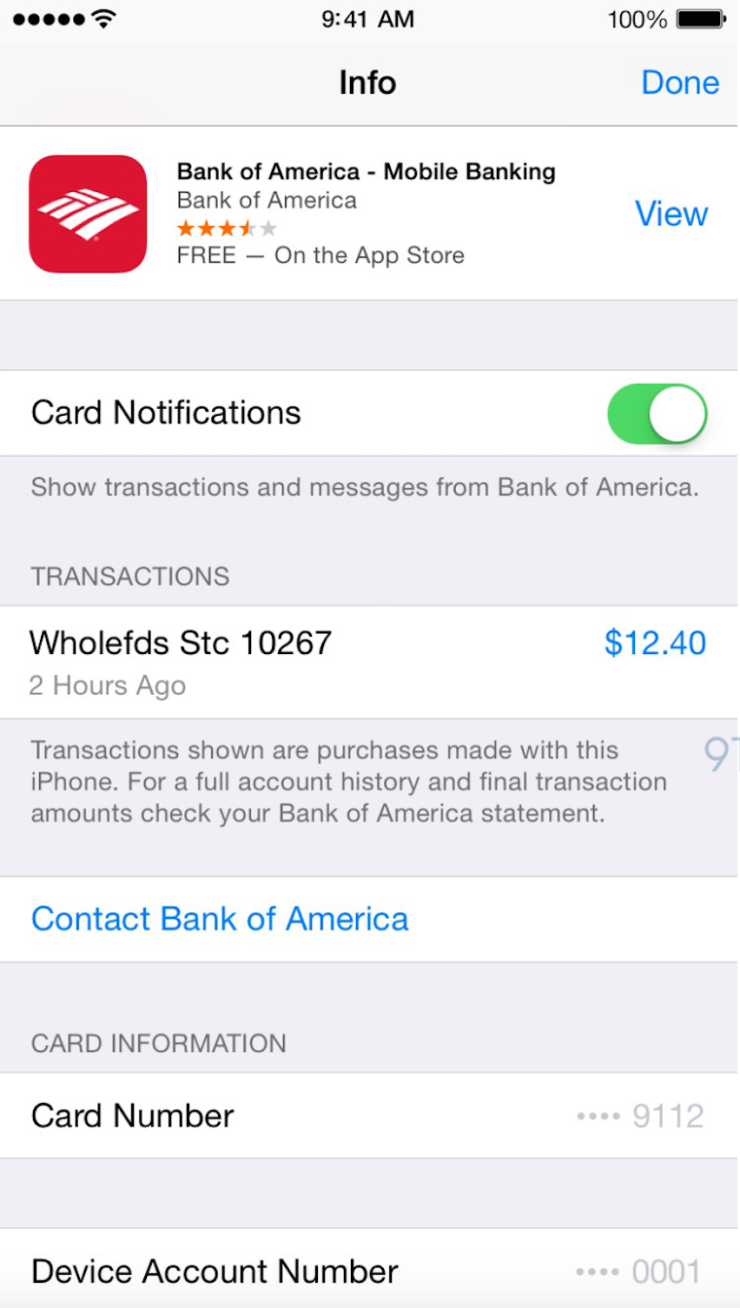 When using Apple Pay at Apple's own retail stores, personal details like your name, phone number, and email address will no longer appear on receipts. (Employees will likely stop pestering you for those same details when checking out, as well.) That's due to the privacy and security aspects of Apple Pay. Apple has repeatedly emphasized that it's not interested in spying on your shopping habits; the company is unable to trace specific transaction details back to consumers, according to its Apple Pay website.

But Apple will be able to run tests on your iPhone 6 or 6 Plus at its stores to make sure Apple Pay is working smoothly. 9to5Mac says employees will have access to a utility that can check for problems with the iPhone's NFC hardware. If the hardware checks out, customers will be directed to discuss any payment problems directly with their bank. Apple is reportedly already running early Apple Pay transactions at its Cupertino campus, and we expect to hear final details on the rollout (which will be US-only to start) at Thursday's iPad event. McDonald's is also readying its own employees for launch; when placing orders through the drive-thru, customers will be presented with an NFC reader that accepts Apple Pay. Employees will need to hold that device out the window, so presumably McDonald's is exploring options for a longer-term solution in the months ahead.