The Centers for Disease Control and Prevention confirmed yesterday that a nurse who treated Thomas Duncan, the first person diagnosed with Ebola in the US, has tested positive for Ebola. At the time of the announcement, the nurse — now identified as 26-year-old Nina Pham — had already been placed in isolation and was being treated for Ebola in Dallas, Texas. But in a conference call today, Tom Frieden, the CDC’s director, admitted that the CDC still doesn’t know how Pham contracted the disease while wearing protective gear recommended by the agency.

"If we knew that there was specific incident, such as a needlestick, then that means we could narrow it down to workers who have that kind of exposure," Frieden says. "But since we don’t know we need to cast the net more widely," and look at every aspect of treatment — including how health care workers don and remove their protective equipment. This is especially important because taking off protective gear safely isn’t exactly easy and "even a single, innocent, inadvertent slip can result in contamination," Frieden says.

.@semiotic_pirate I did it once as a training exercise and yeah, hopeless. needs practice, and probably support/buddy/overseer at time?

According to the CDC, a health care worker has to remove four pieces of equipment immediately after leaving an isolation unit. Given the amount of items involved, taking them off might not seem like a particularly difficult process, but the key thing to remember here is that the order in which this is done (there are actually two suggested methods) is a matter of life and death. 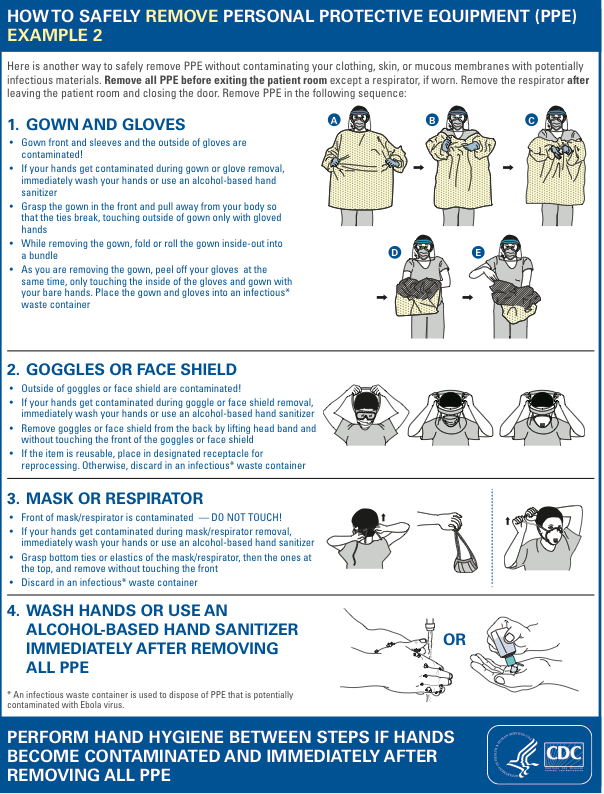 The World Health Organization, on the other hand, breaks the whole process down in a series of eight or nine steps, depending on whether a healthcare worker is wearing boots. These steps are pretty much the same as the CDC's, however. And again, the order in which they take place is crucial.

Because of the complexity of the process, many hospitals and treatment centers around the world have implemented a "buddy system," where a second person oversees the removal of protective gear to make sure healthcare professionals don't accidentally touch a gloved hand to their face, for instance. Moreover, rooms in hospitals are typically designed to make the rules as easy to follow as possible. Shelves, for example, are placed in areas that nurses and doctors are unlikely to frequent as they make their way to the sink, writes Maryn McKenna over at Wired.

"Even a single, innocent, inadvertent slip can result in contamination."

There’s a lot of room for error, but the thing to remember here is that these procedures work. Every Ebola outbreak that has occurred until now has been contained, and that’s in no small part because of the care that was taken during the removal of hazardous materials from treatment sites. Of course, there’s always room for improvement. Frieden notes that the decontamination process in Dallas includes spraying medical gloves with a product that can kill the virus. But now that Pham has tested positive for Ebola, the CDC is examining the possibility of spraying medical gowns before their removal as well. "The bottom line is that the care of Ebola is hard," Frieden says. But "the control of Ebola is already something we know how to do."

For a more detailed look at the donning and removal of protective gear, check out this Ebola-specific video. It was presented at the National Ebola Virus Disease Summit earlier this year.