Comic Con in the 21st century is a cosplay prison planet

You can't take Manhattan, but people still have fun trying

If you've never been to New York Comic Con, you may not know that it's held in a totalitarian future prison. I'm talking, of course, about the Jacob K. Javits Convention Center, which once a year is transformed from a depressing, glass-and-gunmetal superstructure to a depressing, glass-and-gunmetal superstructure covered in Constantine and Walking Dead banners. Add the cosplay-fueled surrealism of your average comics convention, and demons and zombies feel prosaic compared to your weekend in a ’70s dystopia.

To the casual visitor, the Javits Center may appear unremarkable, yet another large glassy block full of escalators and expensive pizza. But it's a strange place to associate with one of the most upbeat events of the year. Simply getting there involves leaving one of the busiest parts of Midtown for a series of weed-filled construction zones or a tangle of on- and off-ramps for the Lincoln Tunnel, depending on which miserable path you prefer. Someday, those construction sites will ideally turn into a real neighborhood with their own subway stop, but for now, they feel like a moat separating you from the rest of Manhattan. You might risk death just to get a reasonably priced cup of coffee. 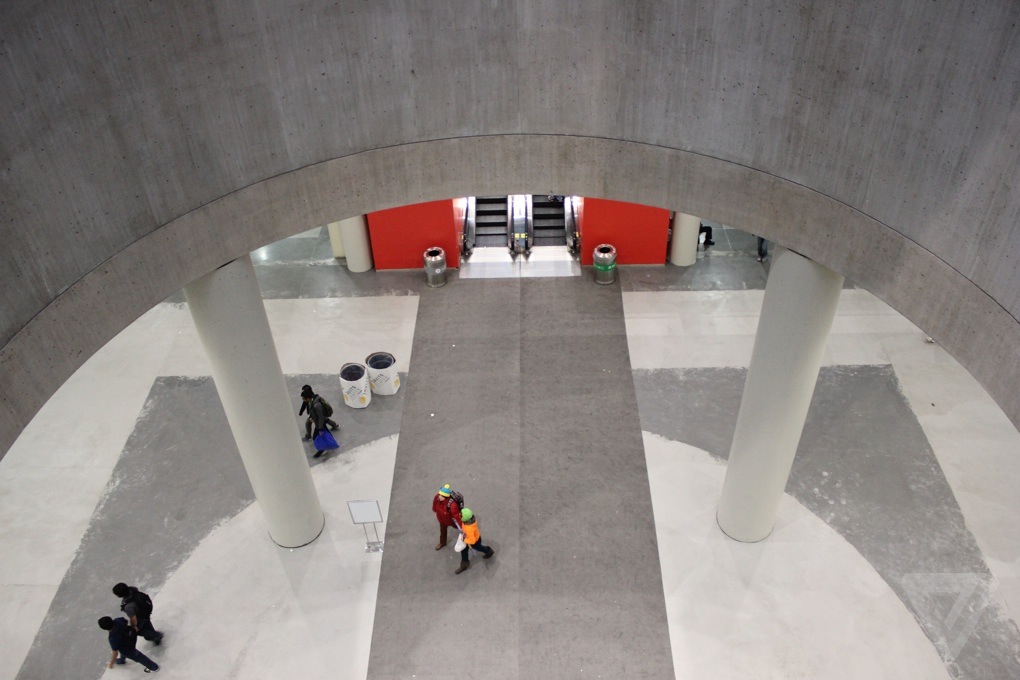 This year, NYCC reportedly sold 151,000 tickets, making it bigger than this summer's San Diego Comic Con, but where the latter has spread out across an entire district of the city, the former still takes place in a self-contained compound, complete with chain-link fences and RFID badge checkpoints. In some places on the sidewalk outside, you can hoist yourself onto a wall and stare down a story or two at costumed fans smoking and chatting around four 20-foot-tall cement cylinders. Some are lone agents, but there are enough Jokers and Harley Quinns out there to found a gang that could give the Warriors a run for their money. You can almost imagine guards with laser rifles looking down from the black staircases that wrap around the building's glass shell.

And this is all before you get inside. The show floor is a stifling mix of gray paint and red carpet, and if you want to go to a panel, you can head down to an underground bunker swathed with black cloth and labeled "Queue Hall." Everything feels a little too large, a little too small, a little misplaced — why is there a spiral staircase on top of the elevator shaft? — or a little sinister. Waiting in line at San Diego Comic Con, no matter how bleak the odds of getting into a hall, feels like being at a music festival. New York is a harder town. A town that's not used to making space for a bunch of people who want to gather in ridiculously large numbers and dress up in costumes to take pictures with other people in costumes. More central "Super Week" events notwithstanding, Manhattan won't let you colonize it. The best you can do is try to carve out some space that nobody else wants. 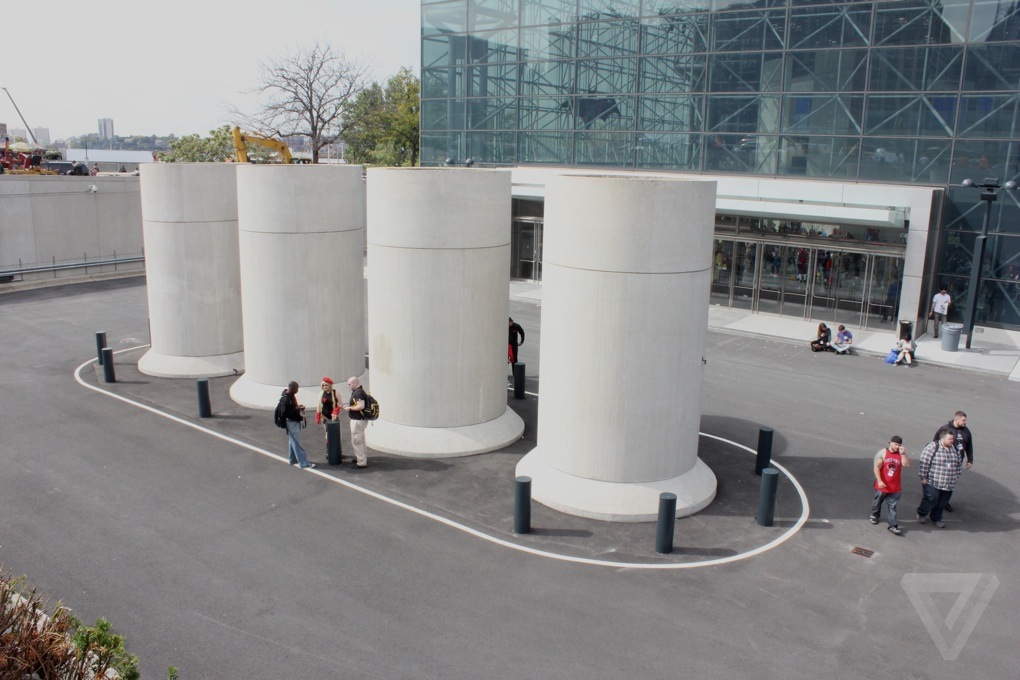 Weirdly, that's almost what defines NYCC. The convention has made strides towards becoming an entertainment event the way that San Diego is, to the point of spinning off a sub-convention to take care of dedicated comics enthusiasts while it targets the wider fan audience. It shows off "exclusive" clips and brings on surprise guest panelists (George Clooney, who appeared for Tomorrowland, was one of the highlights.) And its organizers seem keenly aware of the comparison. "How many of you went to San Diego Comic Con?" asked the emcee before the Disney panel, before cutting off shouts — "No one cares!" But it simply doesn't have space to replicate that carnival of brands and franchises, where every TV show gets its own colorful quonset hut or obstacle course. Though "understated" isn't really the right word for the advertising, given how plastered every surface is, these promotions are less obviously the main event.

At times it's hard to identify a main event. The show floor, despite its crowds, is relatively low-key. The panels I visit are packed, and there's a steady trickle of people heading for the autograph booths, but it's hard to feel like those stark, cafeteria-like spaces are where the action is. It's safer to say the show's energy is concentrated in the lobby and parking lot, where you can see the most elaborate costumes and pick out the year's trends (by my count, there was a major uptick in Zatanna fans.) And the convention showrunners know it. The ads share space with a straightforward anti-harassment policy that's posted prominently around the floor, something San Diego Comic Con declined to do this year despite protest. 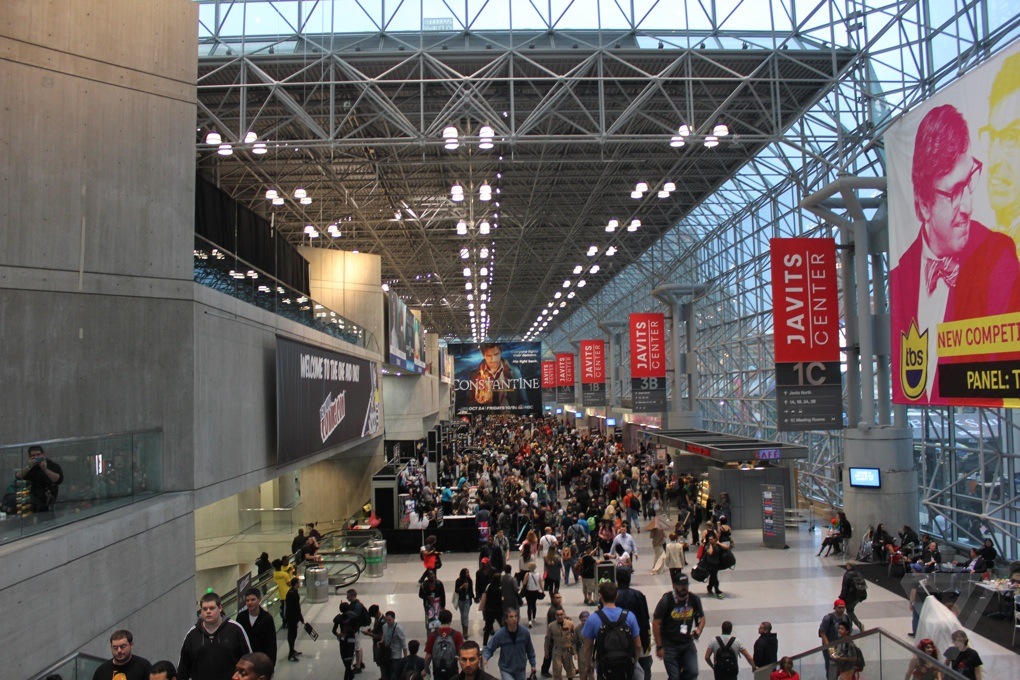 Watching the same ads go up year after year, making the same trip through the same perpetual construction — there's no purer form of despair than looking at what's supposed to be a playground and just seeing the concrete underneath it. New York Comic Con's saving grace is that there are people who still see that playground, or are willing to make it themselves. On Saturday, I reached Javits only to find pedestrians looking down into the compound with inordinate interest. In the parking lot, on that dull fall day, a yellow-masked Deadmau5 was at the center of a dance circle. The next day, the sun had come out, and the circle was still going. Across the parking lot, the Jokers and Harley Quinns actually had teamed up for a group picture. The inmates had taken over, and everything was all right for one more year.