The next big phone from the company that invented it

I was wrong about big phones.

Actually, a lot of people were wrong about big phones. When Samsung first came out with the Note in 2011, I wasn’t the only one who laughed at the idea of a 5.3-inch smartphone. But I was wrong. The Note sold in the tens of millions, and that lineup has become Samsung’s most premium set of smartphones. Not only did it accelerate Samsung’s run toward smartphone dominance, it spawned a legion of copycats. Even Apple, the company that once so adamantly declared 4 inches to be the perfect size for a cellphone, now makes an iPhone so large it makes you look at your hands a little differently.

So for Samsung, for the new Galaxy Note 4, the market has changed. Big is the new normal; everyone has phones this size. They’re all fast, and powerful, and high-res, and full of crazy ideas about what we might want to do on big phones. So the question for Samsung, and for the Galaxy Note 4, is what now? What’s left to do?

It didn’t go bigger (though it did go higher-res, decidedly so). Mostly, Samsung figured out that making a great smartphone is about doing a few things well and not worrying so much about the rest. 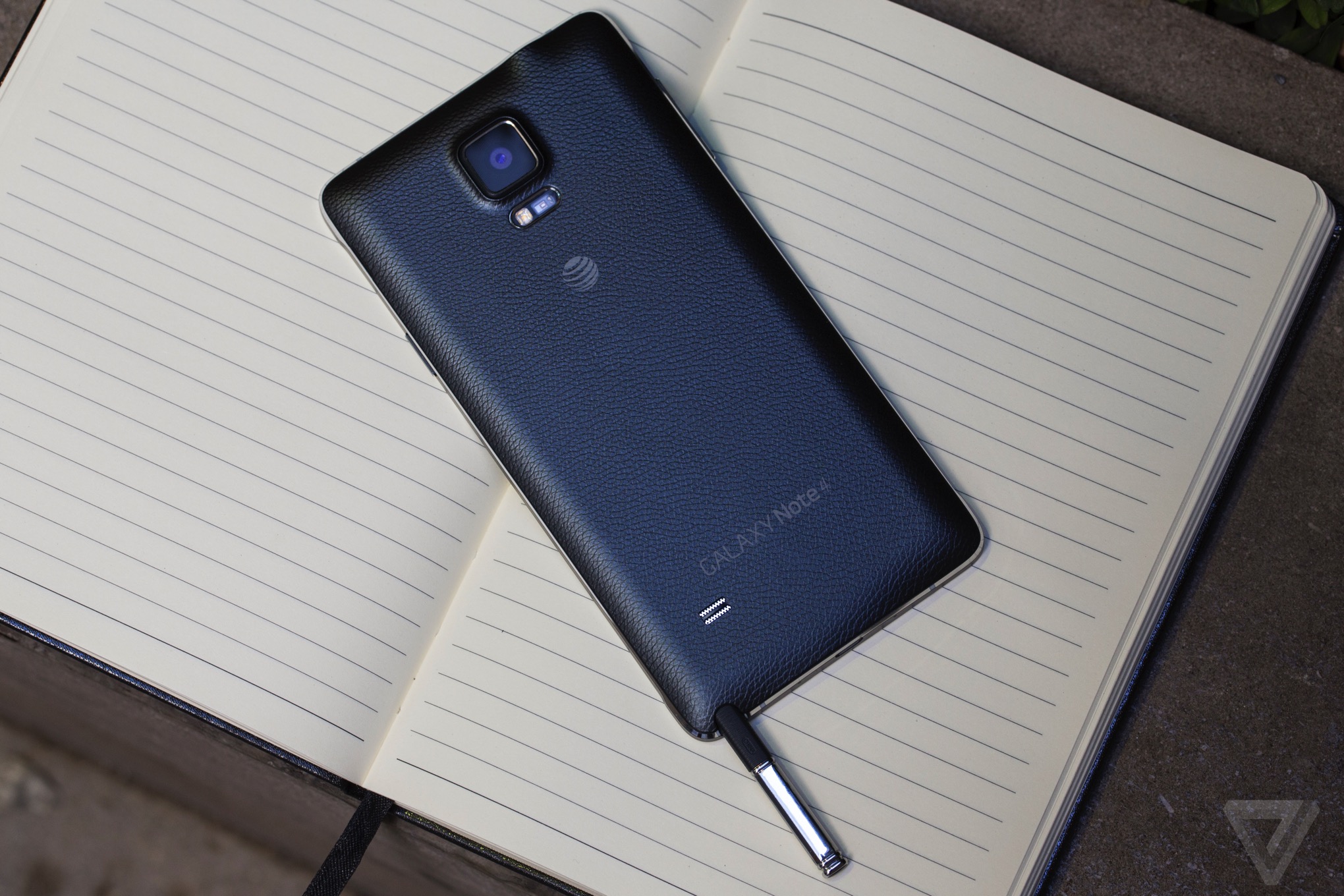 Samsung can make nice phones. After years of pairing its remarkable engineering chops with bland, ugly hardware, the Korean giant has finally woken up and realized that in a world where every smartphone is a good smartphone, design really does matter. And when Samsung puts its mind to something, it figures it out. It ships and iterates, running trials in public until it perfects whatever feature it has in its sights.

That’s why, even just weeks after Samsung’s all-metal gem known as the Galaxy Alpha hit stores, the Galaxy Note 4 already improves on the formula. The phone that was once plastic, then faux-stitched faux-leather, now comes in a beautiful reinforced aluminum shell. Its big, 6.21-ounce, 8.3-millimeter-thick body is rigid and sturdy, sharp and angled. It’s a statement where Samsung’s phones were once utterly forgettable. The sides bulge out ever so slightly at the top and bottom, and on my black review unit the chrome lines reflect light in a way that feels considered and intentional.

Even the screen benefits from Samsung’s unending improvement cycle. The 5.7-inch, 2560-by-1440 AMOLED display is just insanely high-resolution, a ridiculous 518 pixels per inch. It’s crisp and clear and accurate; Samsung has quickly evolved OLED from the overly vivid panels of the Note 3 and last year’s Moto X into something far more lifelike. The Note 4’s whites do turn slightly to pink when you look at it from an oblique angle, but that’s a small worry. Honestly, I don’t know that the screen even needs to be quite this good — 518ppi is not just beyond the point where your eye can’t distinguish individual pixels, it’s miles beyond it — but I’m certainly not going to complain. 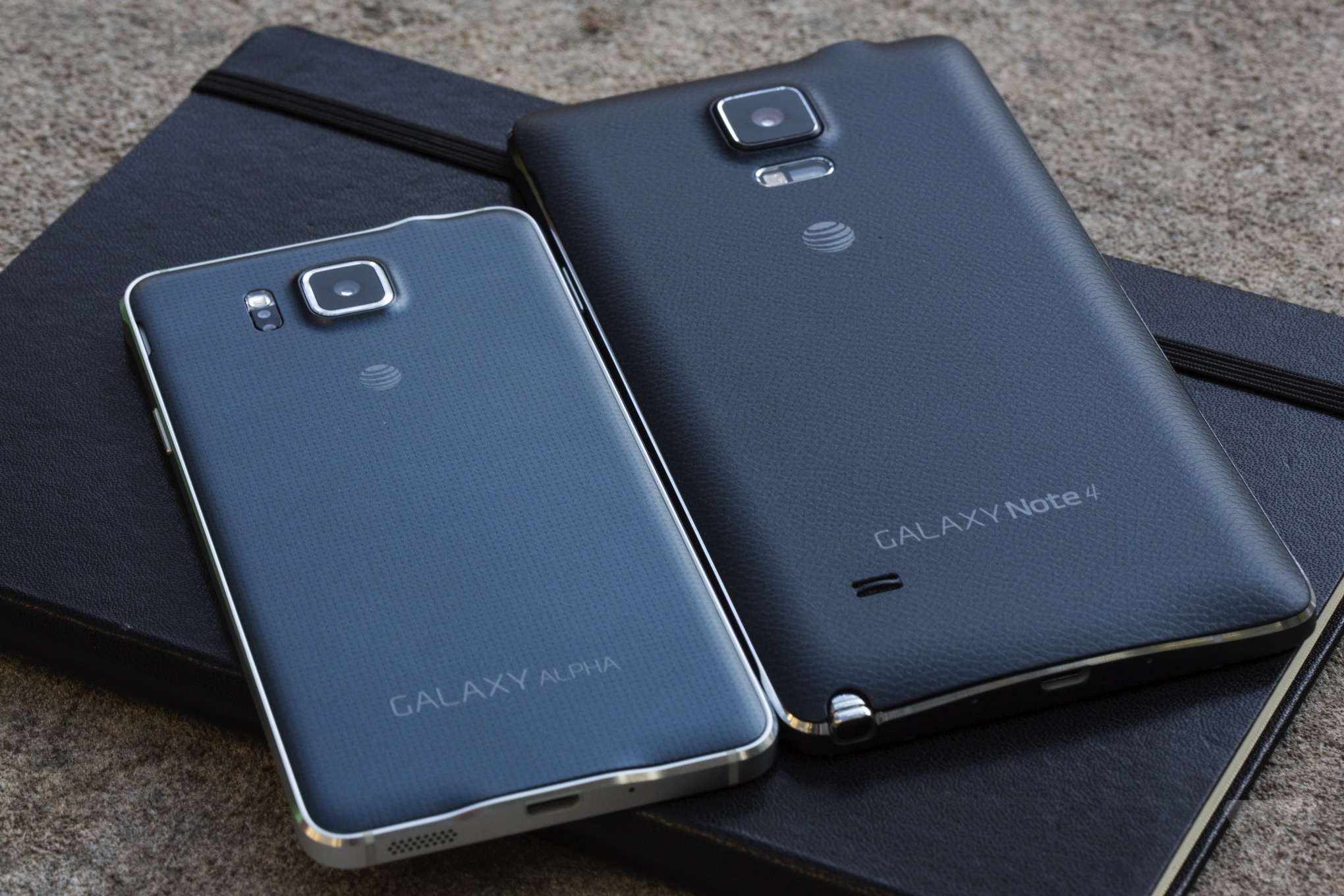 I would complain if such a high-res screen took a toll on the Note 4’s battery, but it doesn’t seem to. I get a full day and a half from the Note 4: 36 hours of streaming music and podcasts, playing games, watching New Girl, and taking slow-motion video much too close to a roaring fire. With something more like normal use, two days won’t be hard at all — the Note 4 does just as well as the iPhone 6 Plus. (Some users on international models have reported far worse longevity, but my AT&T review unit has been great.) 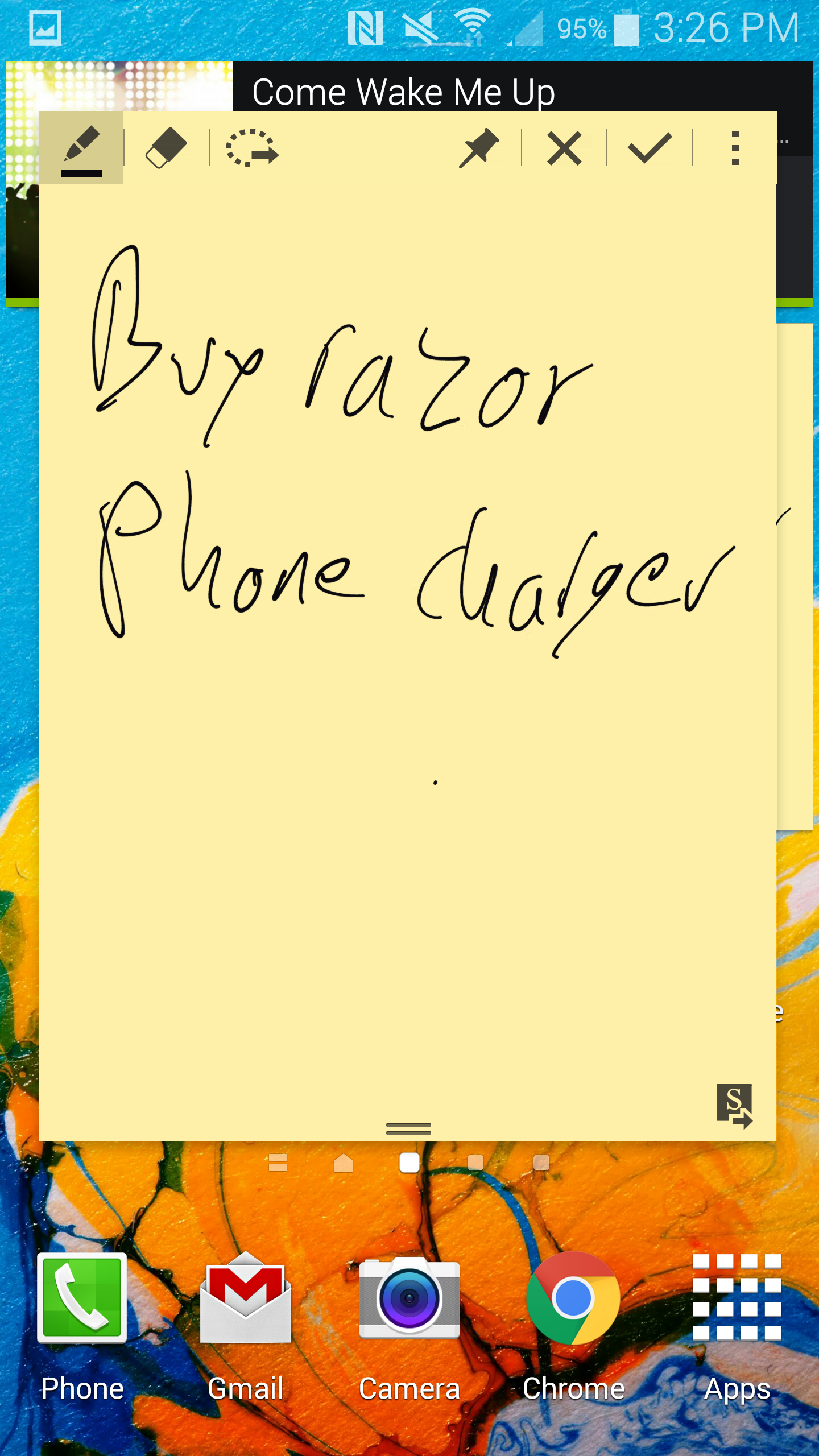 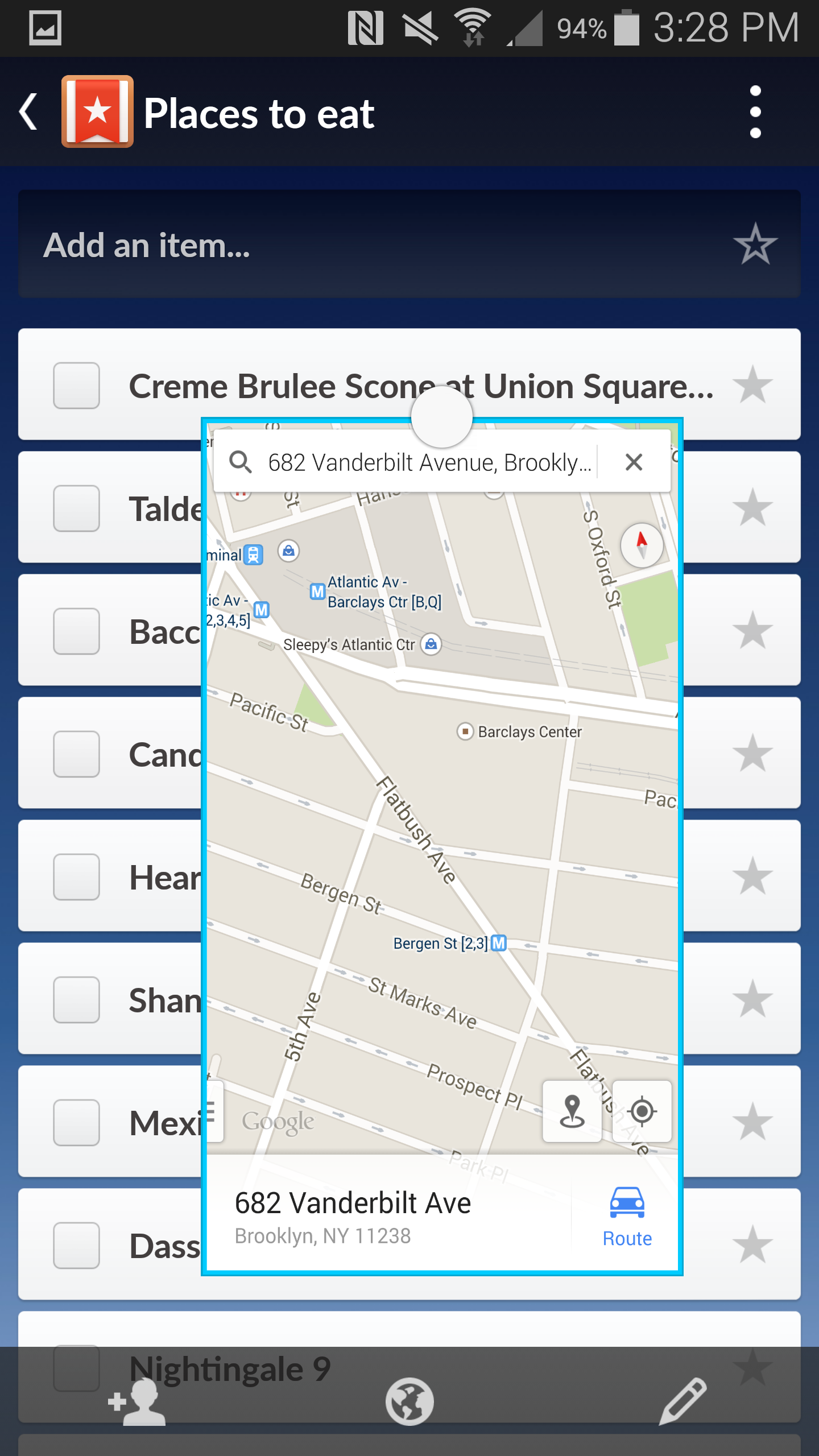 If you do, by some sad misfortune, find yourself at the end of your battery rope, you have two different methods of recourse. One is Samsung’s included fast charger, which goes from dead to 50 percent in 30 minutes and to full in less than two hours. (Beware, though: with any less-powerful charger the Note 4 takes a long time to charge.) Or there’s "ultra power saving mode," which turns the Note 4 grayscale and turns off everything but texting, phone calls, and manually refreshed email. It turns your ultra-modern phone into a pretty cool Treo circa 2006, but it turns 10 percent battery into hours and hours of life.

There are still things about the Note’s hardware left for Samsung to fix, but they’re all small. The fingerprint reader is impossibly finicky, for one, and the heart-rate monitor thinks I’m dead half the time. And I do wish it were slightly more comfortable to hold. That these are my biggest complaints is a wonderful change: Samsung made a good-looking, well-built, thoughtfully designed smartphone that is really nice to use. And I mean, come on, that screen. It’s awesome.

It's big and huge and powerful, but it's much more thoughtful too

It’s odd to say Samsung showed restraint with a 5.7-inch phone that’s made of aluminum and has an outrageously high-resolution screen and a camera that shoots 4K video, but it really did. The Note 4 is full of evidence that Samsung is learning that what people want is not always more, more, and then some more after that. People also want simple, and obvious, and beautiful; more than anything that’s why they pick iPhones. None of those adjectives have ever really applied to a Samsung phone before, but they’ve frequently been on the tip of my tongue as I navigate the Touchwiz skin on top of Android 4.4.

No longer does the Note ship with a half-dozen home screens littered with widgets and icons for Samsung services. (There are still some, because Samsung still can’t completely control its worst impulses, but the number is mercifully fewer.) There are still enough options and settings and customizations to make your head spin, but most are now hidden behind a three-dot menu I suspect most people never even notice. Sure, you can turn on Smart Stay and have the phone track your eyes to keep the screen on while you’re looking at it, but that’s now harder to find and easier to ignore. And gone are the insane tilt- and eye-level scrolling mechanisms, in favor of just scrolling with your damn fingers the way everyone wants to anyway.

You can still scroll with the S Pen, I guess, so Samsung hasn’t completely given in to convention. (That may have something to do with the fact that the S Pen is the feature that most distinguishes the Note 4 from the iPhone 6 Plus.) But it has improved and simplified the S Pen, in response to what Samsung execs tell me is common confusion about just what you’re supposed to do with the pen other than draw. You can still draw, of course, and the Note 4’s S Pen has more sensitive pressure readings and more accurate performance than ever. But if you’re not an artist, you can just use the pen to navigate around the phone without smudging or fat-fingering the display. (That’s what Samsung says it’s found users mostly did anyway.) It’s easy to highlight text with the pen, and a swipe from the upper left corner shrinks the app you’re in and opens another one underneath so you can, say, see a phone number in your browser while you dial in the phone app. You can pin a Post-it note of sorts to your home screen, which is a handy way to keep a quick grocery list or jot down a phone number. I still found myself mostly leaving the S Pen in its sheath — Samsung’s data says most people do — but it’s much more valuable to the average user than it once was. 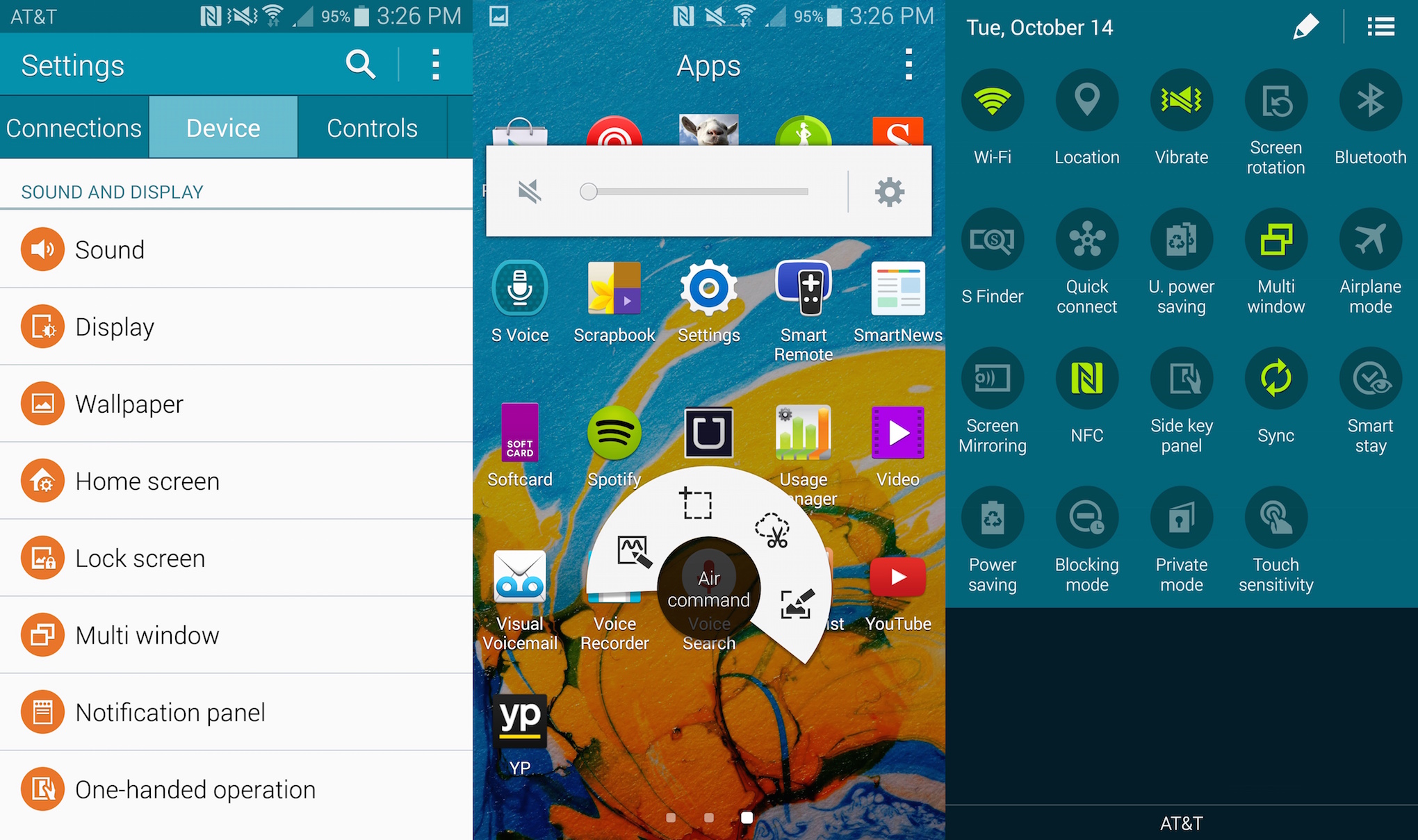 For all the progress it’s made, Samsung still has a lot of work left to do before the Note 4 is as user-friendly as the iPhone 6 Plus, before I’ll be able to hand it to my mom and not worry that she’ll get lost in a sea of blooping sounds and blue-green menus. There are still too many widgets and animations, too many options, too many tutorials that come up every time you try to do anything. Multitasking is great, but I don’t know how to do it or whether split-screen or layered multitasking is better, or how to activate or switch between them. Some things are made much too obvious, others not nearly obvious enough. This phone is tremendously powerful and tremendously capable, and when Samsung is at its best it still feels intuitive and usable. But it doesn’t feel that way quite often enough.

Where Samsung is most successful in this regard is in the Note 4’s 16-megapixel camera. The number of things you can do inside the camera app is just staggering. There are not one, not two, but five different ways to take a selfie, including the "Wide Selfie" mode that basically just looks like someone took a picture of you. (Wide selfies are ridiculous and no one should use them.) You can shoot 4K video, time-lapse video, slow-motion video, or with a bunch of filters. Samsung has dozens of camera modes, and there’s a surprising amount of manual control available. Yet when you open the app, it feels… simple. There’s a button for taking a picture, a button for taking a video, a couple of easily-accessible settings, and that’s it. You can find everything else, but only if you know what you’re looking for.

Editor markup for Samsung Galaxy Note 4 sample photos. This is only visible in the story editor.

Everything the Note 4 shoots looks great, too. Photos are crisp and clean and accurate; the Note 4’s dynamic range doesn’t quite match the iPhone 6’s, but I rarely took a shot I didn’t like. Built-in optical image stabilization makes shooting easier in low light, too. The Note’s autofocus can be a touch unreliable, but the high-res display makes for such a crisp viewfinder that I always noticed and corrected the problem before missing the shot. All things considered, the Note 4 is easily among the best Android cameras I’ve used. It’s not leaps and bounds beyond its competitors, but it’s an excellent, reliable camera. 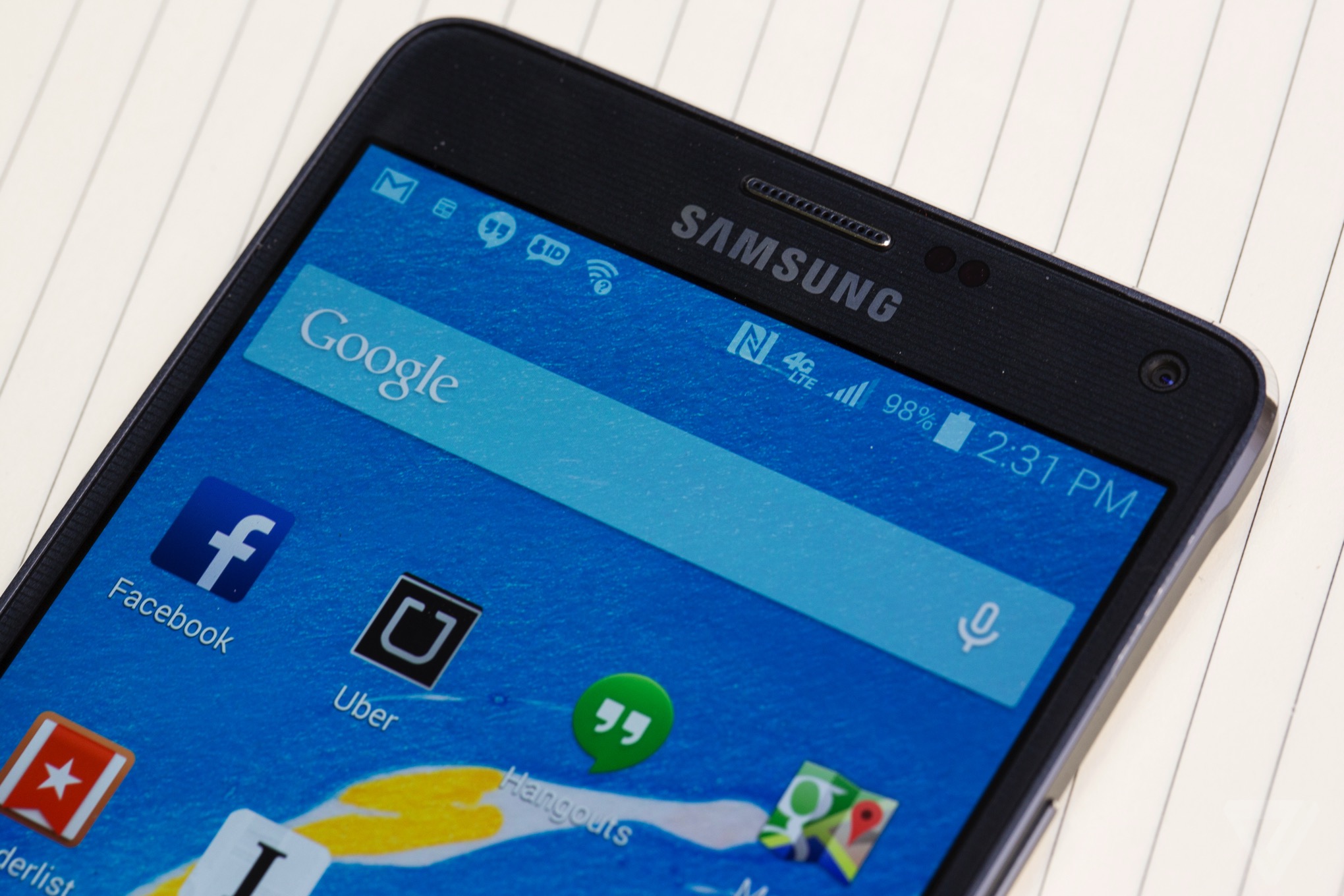 The Note 4 is the first Samsung phone I’ve ever truly enjoyed using. It’s not just a huge curiosity, though it is certainly that; it’s not just powerful, though that’s true too. It’s an excellent phone inside and out, the first Note that combines design, power, and performance in one package. Samsung knows how to take advantage of a large screen — even more so than Apple — and with a pen and some software tweaks and a ridiculous number of pixels, it does just that. Note still stands for productivity, and Samsung still sets the standard: you can do so much with this 5.7-inch device.

Even where it still falls short — namely, in Samsung’s still-overbearing need to tinker with and add to every single aspect of Android — Samsung is improving. Yes, the Note 4 is still too complex, still too focused on productivity over usability. Yes, there are still too many things you can do with this phone, and yes, too many of them are pointless. Yes, the iPhone 6 Plus is an easier-to-use phone with a better app ecosystem and a slightly better camera. But when I look at the Note 4 I see a Samsung that knows all this, and is fixing it slowly but surely.

Samsung can make truly great, uncompromisingly fantastic phones. And for the first time in a long time, I think it will. Soon. 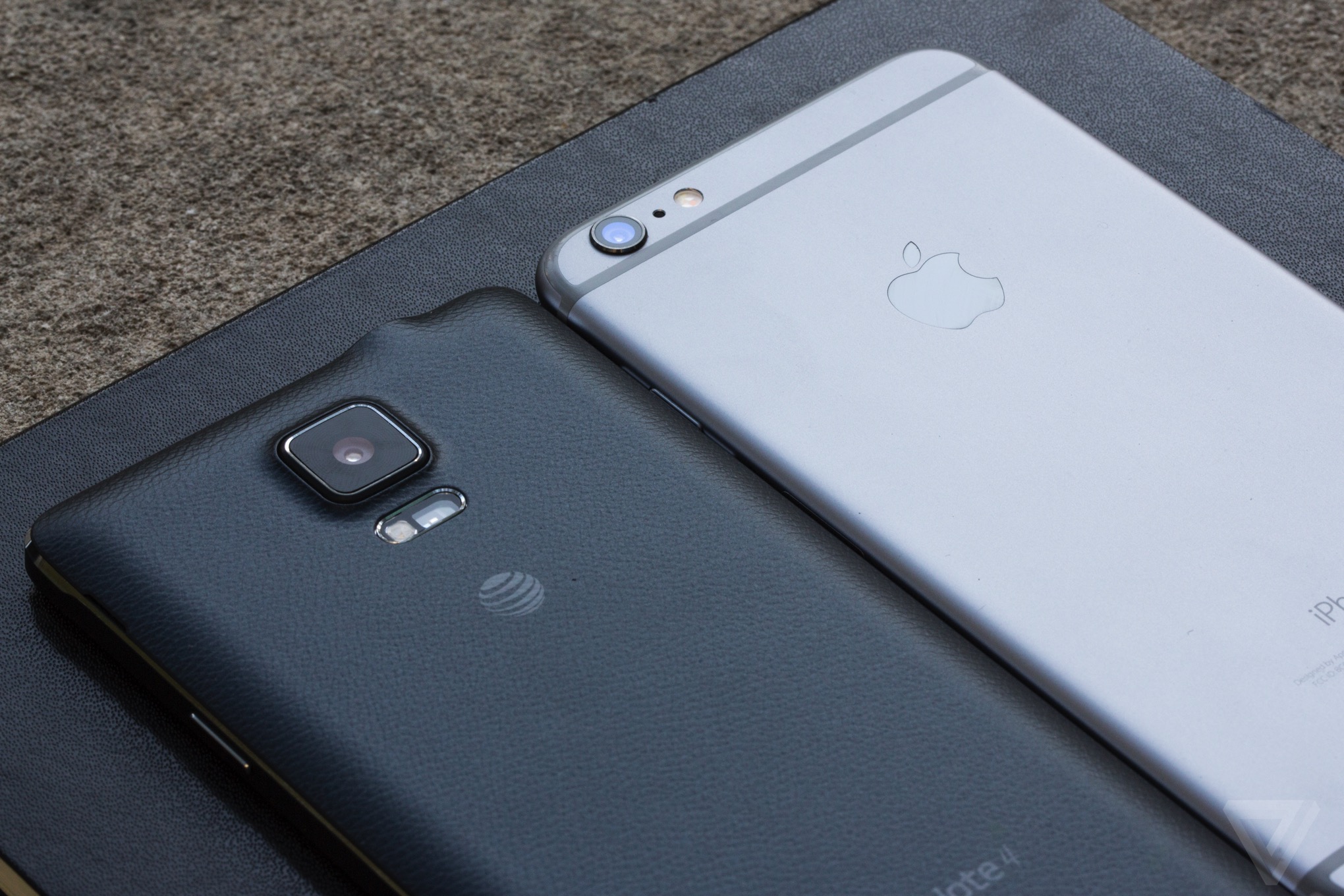