Netflix has released its Q3 earnings today, and the results have some investors in a panic. During the quarter, the company brought on an additional 3 million subscribers. That brings Netflix's total customer base to 53.1 million; CEO Reed Hastings says he expects to close out 2014 with 57 million global members. But he also acknowledged that the 3M number missed Wall Street expectations — and the company's own forecasts.

Netflix ended Q3 with 37.2 million total US members, which is short of the 37.6M it told Wall Street to expect. "As best we can tell, the primary cause is the slightly higher prices we now have compared to a year ago," wrote Hastings in his quarterly letter to shareholders. Looking internationally, Netflix now tallies 15.84 million members, also well below its original 16.16M Q3 forecast.

"This quarter we over-forecasted membership growth," Hastings said. As a result of that disappointing subscriber growth, Netflix's stock is getting hammered in after hours trading and has plunged dramatically. In terms of revenue and profit, the company essentially met projections with $1.41 billion in revenue and earnings of 96 cents per share. 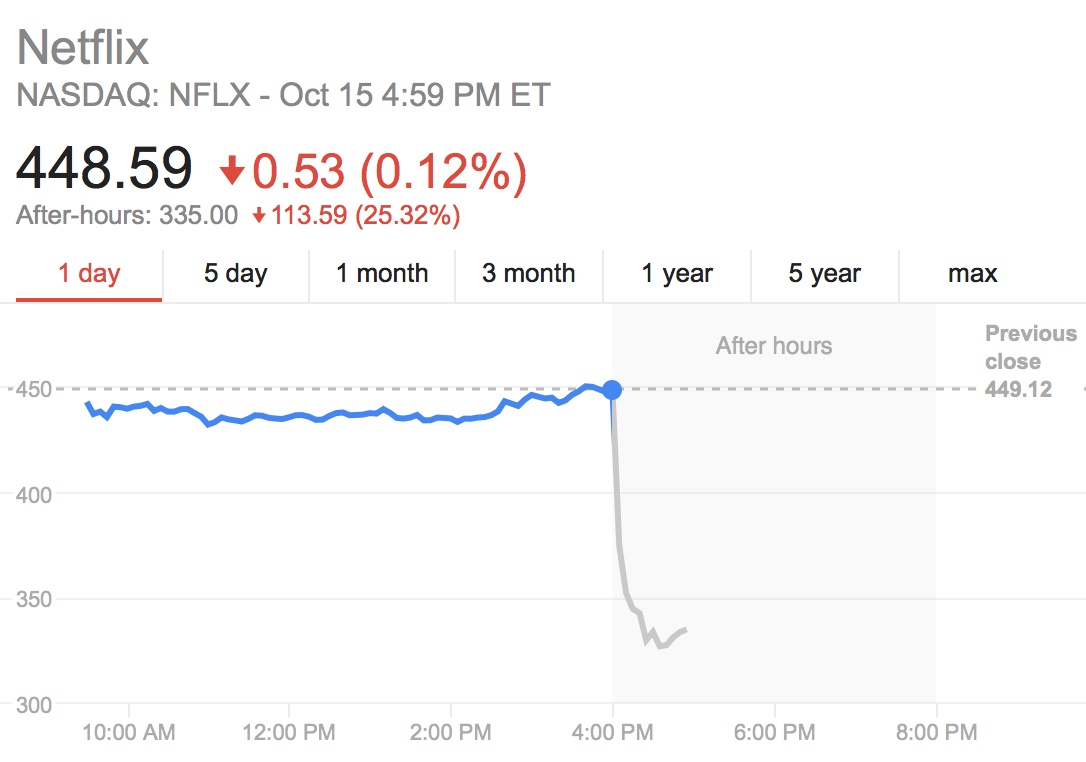 Hastings also addressed HBO's plan to offer a standalone service in his letter, which presumably saw some late edits after today's big announcement. On HBO as a competitor, Hastings writes:

Starting back in 2011 we started saying that HBO would be our primary long-term competitor, particularly for content. The competition will drive us both to be better. It was inevitable and sensible that they would eventually offer their service as a standalone application. Many people will subscribe to both Netflix and HBO since we have different shows, so we think it is likely we both prosper as consumers move to Internet TV.

Hastings is being pretty straightforward. HBO creating a standalone streaming service was "inevitable" according to the Netflix CEO. But he clearly believes both companies can coexist, each making plenty of money, in the months and years ahead. That sounds awfully kind, but there are many unknowns about HBO's pending internet-only service — scheduled to launch in 2015 — and exactly what shape it will take. So Hastings might not be so welcoming come next quarter's letter. Netflix has made its business by leading the internet TV charge, but HBO is finally unshackling itself from cable companies; that news is likely giving at least some Netflix investors pause.