Apple's new iMac with Retina display is very pretty and useful, but in the same places where it's made leaps and bounds, it's also made one of Apple's other pieces of Mac hardware look like a relic, and an increasingly obvious mistake if you were to buy it.

I'm talking about Apple's Thunderbolt Display, a product that's languished nearly as long as the iPod Classic (which was finally laid to rest last month), but that's actually still a really good idea. The last time Apple updated the $999 screen, the iPhone had a 3.5-inch display, and the company was just beginning to figure out how to make its mobile and desktop operating systems actually work together. Fast forward to today, and you can answer phone calls from your 5.5-inch screened iPhone on any Mac running Apple's latest OS. And perhaps just as dramatic of a change is what the iMac used to look like and what it does now, with a high-end Retina display model that doubles the number of vertical and horizontal pixels in a much smaller computer.

Once the "world's first," now it's the last in many areas

By comparison the Thunderbolt Display remains big, bulky, and with none of the anti-reflective or color accuracy technologies that have been in Apple's iMac for the past two years. Once the world's first Thunderbolt display, it's become close to the world's last in everything else. It's got USB 2.0, and the first version of Thunderbolt, which was replaced by faster Thunderbolt 2 roughly a year ago — now a requirement for hooking up to 4K displays. Moreover, Apple still ships it with an old version of its MagSafe charging cord, which requires you use a kludgy adapter in case you want to use it with any MacBook the company's sold since mid-2012.

Still, according to Apple, pushing as many pixels as you'll find on its new iMac was no easy task. It's got four times the number of pixels you'd find in the same 27-inch screen of the previous model. "At such a scale, even the best existing technologies wouldn't have made this iMac possible," Apple says. To a degree that's true, because even Thunderbolt 2 isn't designed for that resolution, something that's coming in a new version of DisplayPort technology announced last month.

Is the languishing of this standalone display a sign that Apple's ignoring pros? Last year's Mac Pro revamp and now this $2,499 iMac for pixel peepers strongly suggests that's not the case. But it does highlight a peculiar gap in Apple's product line, and how it expects people to use one of its two computers that you can't use without hooking it up to a display. Look at the Mac Pro, for instance, and Apple is still advertising it as something you use with a display made by someone else: 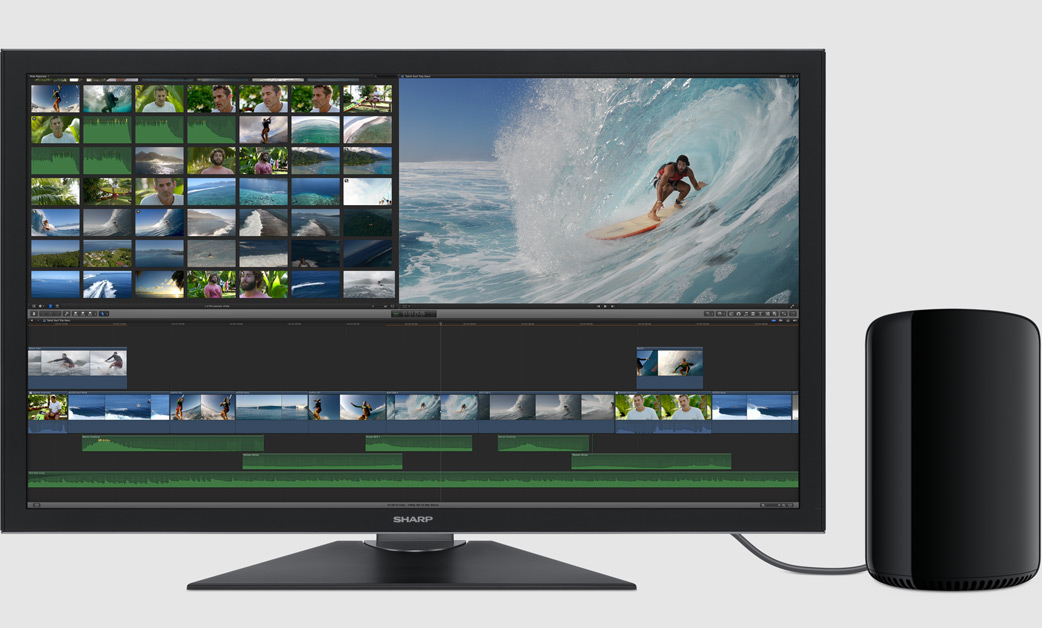 Is the new iMac a consumer product? Maybe that's the better question. At a starting price of $2,499, you could buy two of its smaller, entry-level iMacs, and still have some money leftover to buy a year's worth of Adobe PhotoShop. But what you get instead is not being able to see individual pixels, and edit 4K (and higher) quality videos and enormous photos on a screen that was built for those tasks. Not even people who bought Apple's $2,999 Mac Pro have been able to do anything close to that on Apple hardware, unless they're on the 15-inch version of Apple's MacBook Pro with Retina display.

The Retina display will trickle down to the cheap iMacs, eventually

The important thing is that its screen is destined to end up as the one you buy in Apple's eventual entry-level machine a few years from now. That's what happened with the MacBook Pro, on Apple's portables like the iPad and iPod, and likely whatever display ends up replacing this one. The big question is if Apple wants to do another one, or if this will experience a similar fate as the iPod.

There's still no denying that the Thunderbolt Display was, and still is an exciting idea, something that is close to the vision of replacing a rat's nest of cables with just a plug or two. While the idea of what we do on desktop computers versus tablets and our phones is still being formed, it's very easy to look at this now languishing product as a taste of things to come.