1979's Alien, the Ridley Scott-directed film that kicked off the series, only required a single alien to create an enduring sci-fi horror masterpiece. Just the idea of being stuck on a ship with a towering, dangerous, and cunning xenomorph was terrifying, and all it took was a glimpse of the shiny black creature to make the hairs on the back of your neck stand up.

Later films moved away from that sense of terror, shifting towards straight-up action, and the plentiful video game adaptations did much the same. 2013's abysmal game Colonial Marines, for instance, turned the xenomorph into simple cannon fodder. With the help of a pulse rifle and a flamethrower, you killed a lot of them, and they posed very little threat. For the upcoming game Alien: Isolation, the team at UK studio The Creative Assembly wanted to bring that dread back. And the key was the alien itself.

"We wanted to restore it to its rightful position," creative lead Alistair Hope says of the xenomorph. "It felt like there was an opportunity to really tap into what you felt when you watched that first movie.” 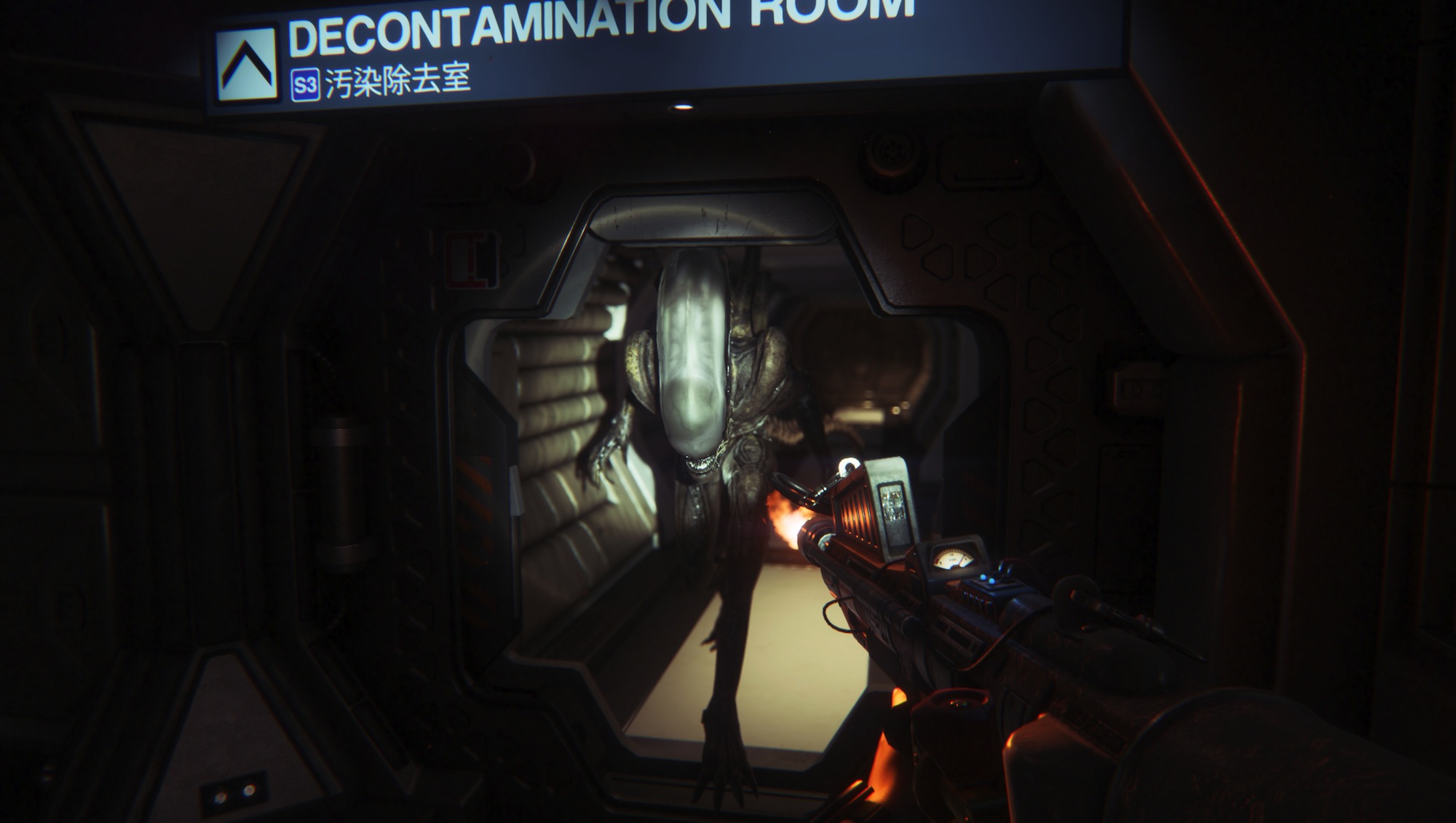 Unlike the majority of Alien games, which tend to draw inspiration from the action-heavy James Cameron sequel, Isolation is about survival instead of shooting. It takes place 15 years after the original film (you play as Ripley's daughter Amanda), and there's only one alien in the whole game. The problem: you're trapped on a space station with it. The experience revolves around trying to survive against an enemy you can't kill. You can hide in lockers, throw flares as a distraction, or even pull out a flamethrower to keep it at bay, but it only takes a few seconds for the alien to pierce your guts in a horrifying death sequence.

The game is completely terrifying.

But turning that concept into a game was a somewhat radical idea. Few, if any, video games rely so heavily on a single enemy to drive the experience. In the case of Isolation, if the alien didn't work properly, then neither would the game. The xenomorph became the focal point of the development process, and the team had few comparable examples to draw inspiration from. "We had to start from scratch," says Hope. "We'd never made anything like this before."

"We couldn't motion capture an alien."

The obvious starting point was the movie itself; the team analyzed every aspect of Alien to figure out the key components that made the creature so scary. "One of the things for me was trying to recapture the sense of mystery for the alien," explains Hope. "When you watch the first film, that creature feels like it's really, really intelligent and almost omnipresent and could appear at any point. That was one of the things that we really wanted to capture, the sense that this thing could appear out of nowhere."

That's much easier to do in a movie, where the director has control over every little thing the viewer sees. Game designers don't have that same luxury. Isolation isn't a tightly scripted experience; it unfolds in a dynamic way that’s different depending on how you play. It's possible for players to see the alien at virtually any point in the game, so in order to feel real, the creature needs to behave as a xenomorph would at all times, or else it breaks the illusion. In the game, the creature hunts you primarily through sight and sound — if you knock something over, it will come to investigate the noise — and Hope says that its personality was based largely on predatory cats. "This thing moves around cautiously and confidently, in a very considered way, a bit like a big cat," he explains. "When they do go in for a kill, they're explosive, and it's over very quickly."

That meant building a complex animation system from scratch — "we couldn't motion capture an alien, unfortunately" — as well as an artificial intelligence that seems both cunning and unpredictable. To ensure the alien is terrifying, it’s important that you never quite know exactly what it will do. "It instills fear in the player," Hope explains, "and makes them doubt what their next action is." 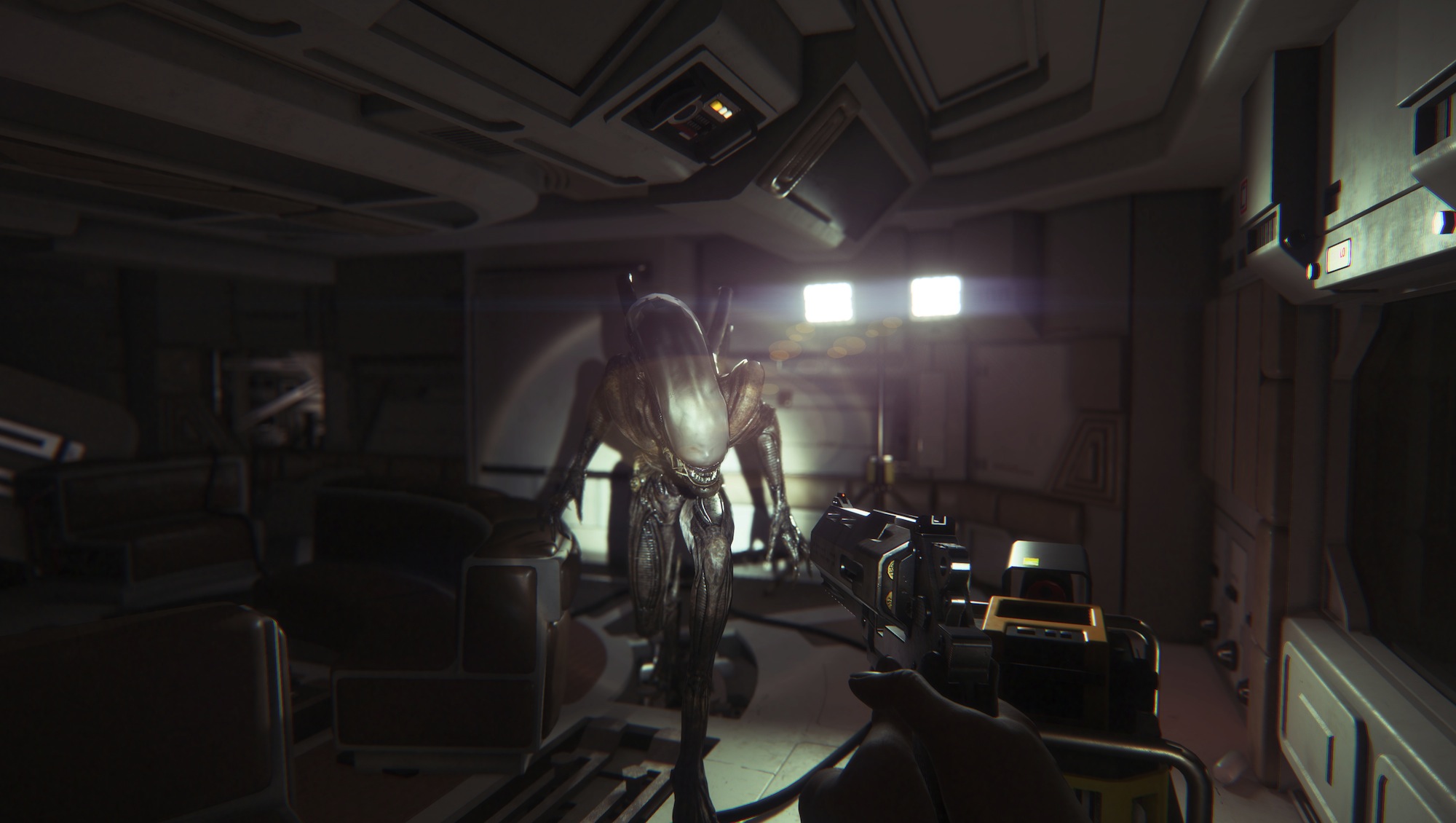 To sell the concept to publisher Sega, Hope and his team built a quick-and-dirty prototype over the course of four weeks, which featured the alien lurking around a plain development environment. But during that early point in the process, it wasn't coming together quite the way the team wanted it to — there was something missing that they couldn't put their fingers on. "We were banging our heads because it felt like the decisions and choices we made on the alien were the right ones, and they should be working, but it was just not feeling right," Hope says. "There was a lot of soul-searching as to what we were doing."

As it turns out, a xenomorph can't exist in a vacuum — or at least it’s no longer terrifying in one. The team realized that it wasn't just the alien itself that was so scary, it was the world around it as well. Alien has a very specific aesthetic, a dark visual style with a distinctly 1970s vision of a sci-fi future. Isolation recreates this look perfectly, with chunky, blocky technology and a dingy space station that will bring you right back to the 1979 film.

"There was a lot of soul searching as to what we were doing."

The Isolation team realized that sound design, art, and lighting weren't just a way to make the game look cool. They were integral to the experience. "That was the moment where it felt like 'Yeah, that's right. We are on the right path,'" says Hope. "If the alien is the star of our show, we needed the rest of the world to really support that."

"Maybe if we had realized how much work it was going to be we might have thought again," he adds. "The goal, what we were trying to do, just seemed so tantalizing that we just had to go for it." But it was definitely worth the effort. Alien: Isolation, at least in the early stages I've played, is downright terrifying. When I'm hiding in a locker, and the xenomorph stalks in front of me, carefully examining that crate I bumped into moments earlier, I find myself actually holding my breath as if exhaling would be enough for the creature to figure out where I am. I’m paranoid about pulling out my flashlight for fear that the creature might see it, and once I literally jumped when I mistook a rotating desk fan for the alien’s tail. Just like Sigourney Weaver in Alien, I’m constantly scared for my life.

The xenomorph is back.

Read next: Alien: Isolation is the most terrifying game I've ever played