As I push off for my first time on an actual working hoverboard, the first thought in my mind is not how different it is from how Michael J. Fox did it in Back To The Future Part II — which is obviously just a movie. It’s whether or not I’m going to immediately go face-first into this large, copper-lined floor. It’s also sinking in that this highly experimental skateboard required signing a liability waiver, and that there are several people positioned around me whose sole job it is to make sure I and their $10,000 prototype don’t go flying out of control.

This is the Hendo, the namesake of an inventor named Greg Henderson, and it’s really more of a technology demo than something that’s going to get you to work in the morning. Right now it’s effectively a parlor trick, and it apparently only works in parlors lined with a one of a small set of metals. But Henderson, who co-founded the hoverboard’s parent company Arx Pax with his wife Jill, imagines the technology that’s inside it could become a solution for keeping buildings from getting destroyed in floods and earthquakes by simply lifting them up. They also say that it could serve as a replacement for the systems that currently levitate maglev trains. 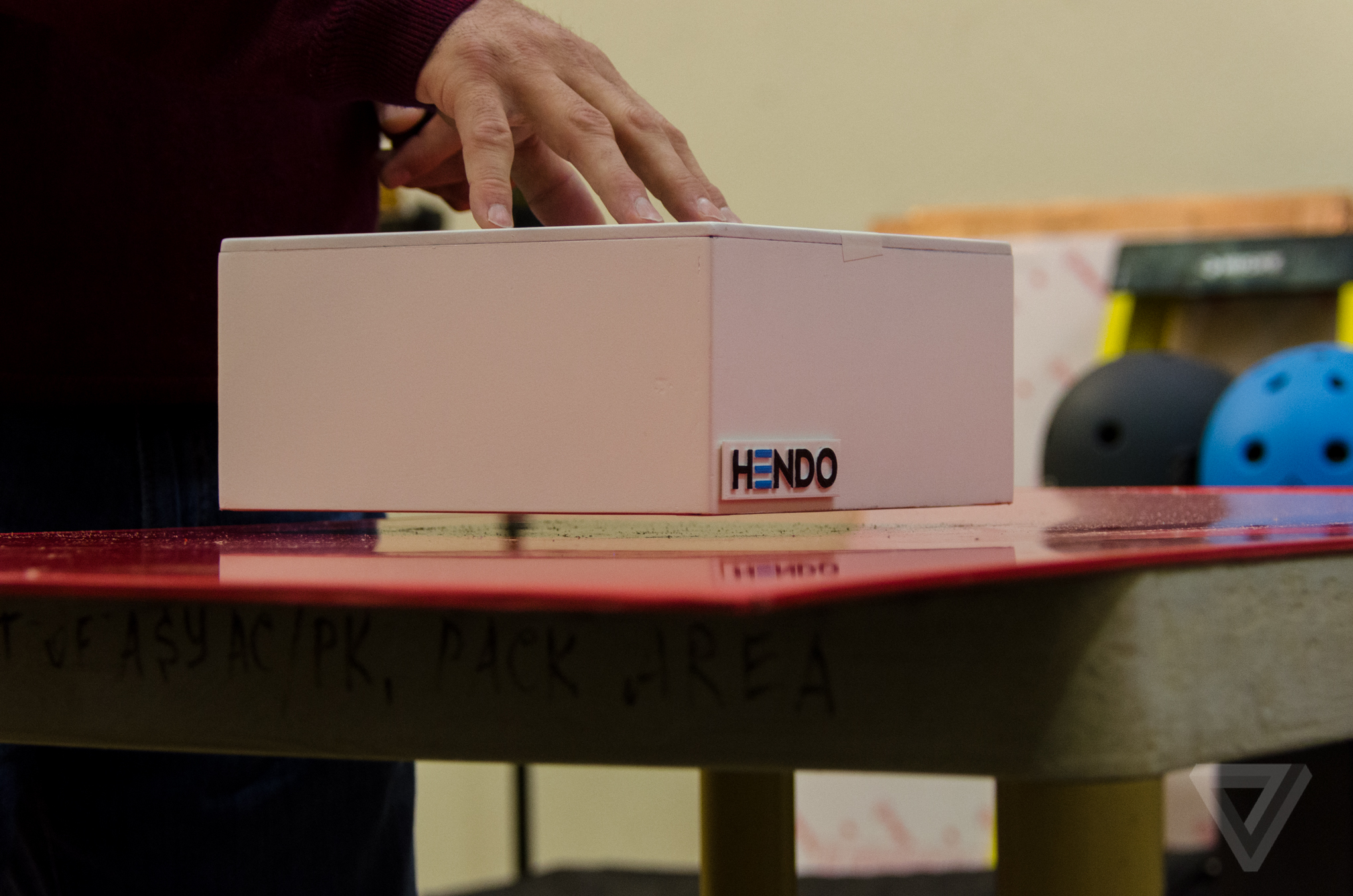 Those ambitions are the opposite of humility, but Arx Pax seems like a humble company, situated in a nondescript office park in Los Gatos, California. Also humble: the small square white box that floats just a few centimeters above metal surfaces, designed as a technology demo that will be made available to Kickstarter backers. It’s just like an air hockey table, but in reverse, where a large object is simply floating just a few millimeters above, and adrift. But there’s no air, just a barreling thrum of whatever is going on inside the "white box." Inside it are a group of what Henderson refers to as hover engines, and the oversimplified explanation of how they work involves a little electromagnetism and Lenz’s law. Scale this up a bit and you get the hoverboard I’m on. Go even bigger and you can hold up cars, trains, and even buildings. Or at least that’s the idea. 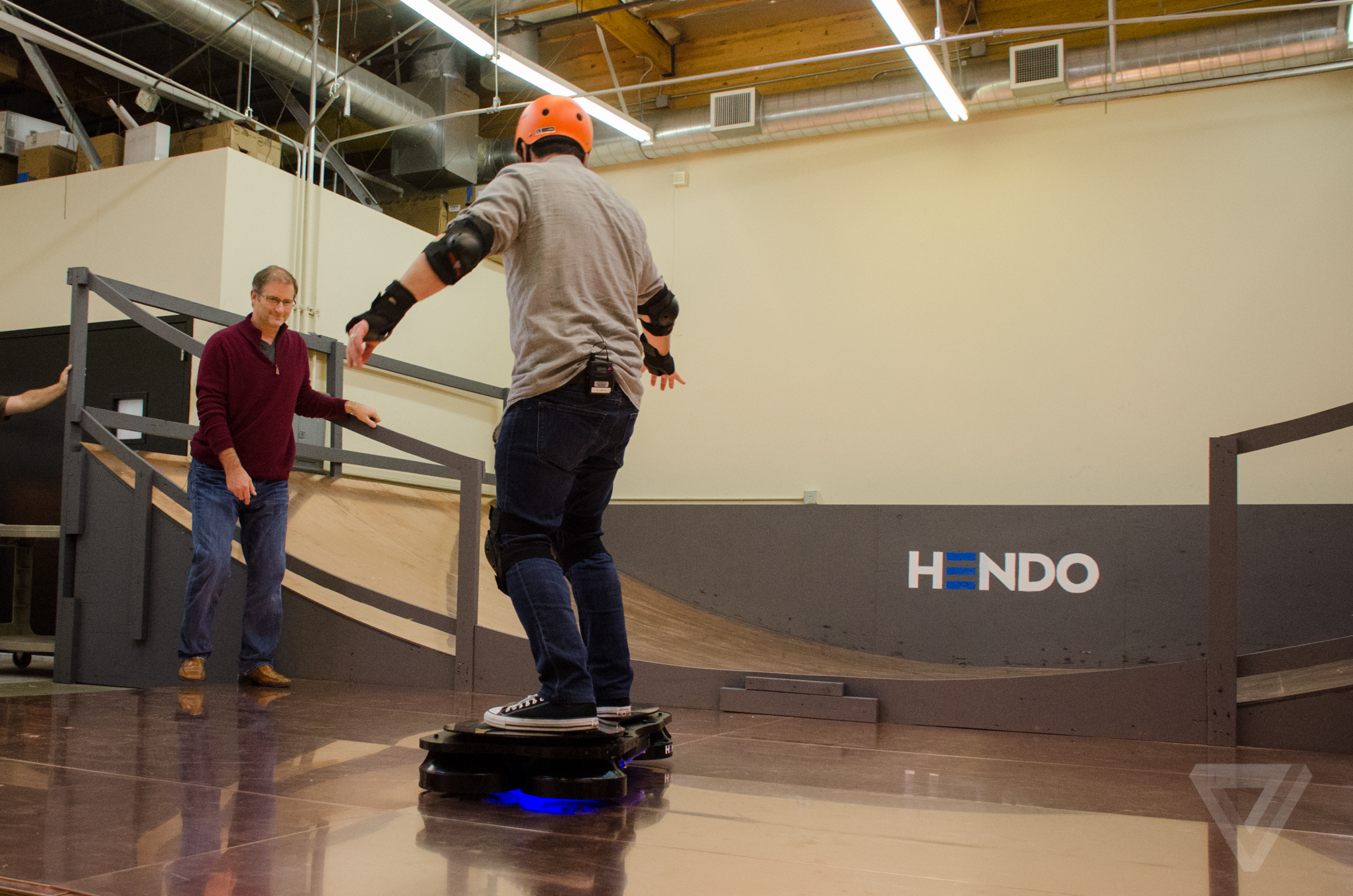 "How this works with a human is fun, but not elegant"

"A magnet has an electromagnetic field. It is equal in all areas. It has a north and a south pole," Henderson explains. "What if you were able to take that magnet, and organize the magnetic field so that it was only on one side? And then you combine that with other magnetic fields in a way that amplifies and focuses their strength? That’s magnetic field architecture." When used on a material like the copper floor that I’m standing on, the entire unit floats a few centimeters off the ground. Goodbye friction, and hello hoverboard.

How that works with a human on top of it is fun, but not elegant. I used to skateboard quite a bit, but hopping on Hendo’s hoverboard is something else. The easiest way to describe it is like getting on a snowboard that’s just been pulled out of an oven. Any sort of lateral control you’d have with a skateboard goes out the window. Instead, you’re floating, and often spinning as your body pushes certain parts of the board, adjusting its direction. "You should just stay on the board and let us push you," one of the safety attendants says to me after my first few trips across the demo space. I happily agree.

Henderson says the technology is "completely safe," and that there’s no measurable field strength above it, where whatever’s on top of it is being carried. "It is very safe particularly relative to other forms of maglev," he adds.

While "completely safe," it’s far from silent. Where the white box sounded like a loud desktop computer, the sound coming out of the hoverboard prototype is like a high-pitched screech. This will be dampened by the time the company has a more polished version of the hoverboard ready by this time next year, Henderson promises, but for now it’s a cacophony of squeals when you get on. The word "Banshee" comes to mind.

Was it fun? Unequivocally. Pushing off for the first time, and even later runs was a thrill. For the first time ever, I felt like it was OK for some electronic device to have a blue glowing light on it. It’s just too bad there wasn’t more space to ride on. The small demo area actually made it more difficult to get momentum, and stabilize myself as I glided gently into the waiting arms of my spotting team. 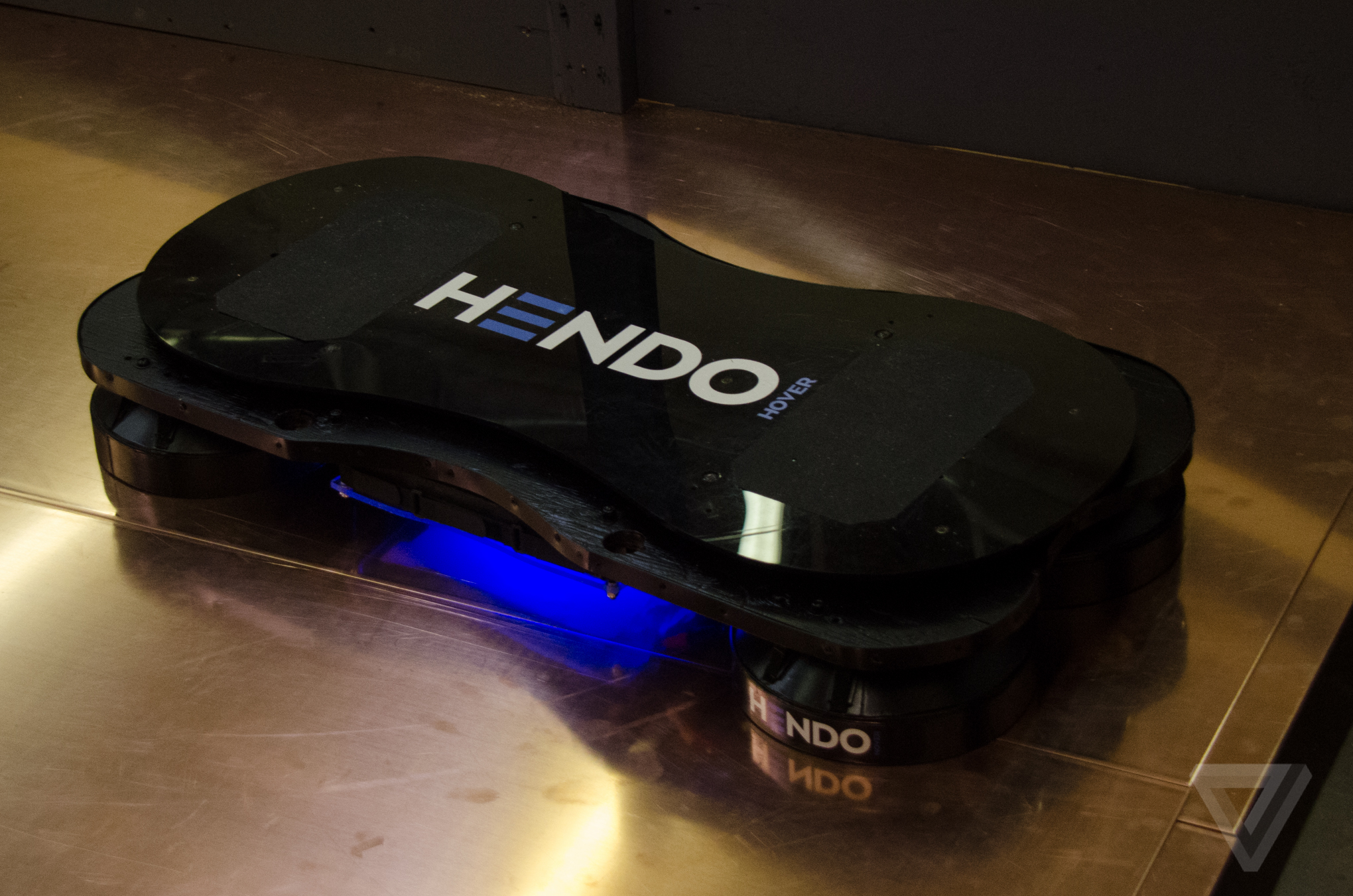 Arx Pax also built a modest half-pipe, which I did not volunteer to try, but was given a brief demo of how this could work. The point here is that the board will work on a surface that isn’t entirely flat, but it also makes for a good demonstration the difficulties of controlling something that is not touching the ground. After losing his balance on a second run, Hendo’s brave stuntman leaned too heavily on one of the edges of the board, causing a chunk of the protective covers over the "engines" to snap off and go flying across the floor. That’s why we’re all wearing safety glasses, and why this is still in development.

This is not the beta version of the product as much as a proof of concept — even if you could convince your local city council to pave the sidewalks in copper, commuting on this hulking beast is not going to be a viable option. Arx Pax is trying to raise $250,000 through a Kickstarter campaign to turn this into something beyond a prototype that runs for seven minutes before the batteries die. The company’s offering backers small engine packs so that they can use the technology to build their own creations. It’s also giving up to 10 people "production" versions of its hoverboard, which cost well over $10,000 a pop, but $10,000 is the most that Kickstarter will allow people to pledge. Ultimately, Henderson says, the price will come down, but for now he wants to offer the core technology to other people who might have a clearer purpose of what to do with it.

"Our goal is inspiring co-creation with the entire community of tinkerers and makers and outside thinkers," Henderson says. "I guarantee one thing: we’re going to be surprised at the results. They’ll come up with all kinds of uses: planes, trains, automobiles, factory automation. Those are some of the easy ones."

Henderson also believes that larger companies might want to license the technology for use in commercial applications. "Planes may be not so obvious, but maglev assisted takeoff is something all of the big airplane manufacturers are looking at because takeoff is where all the energy is used," he says. "There’s this virtuous cycle that if you can shrink payload of fuel down, and take away all those pounds of fuel, the wings can get smaller, and then that means that we get less fuel, etc."

Underlying that is the very real fact that electronic magnet suspension technology has been used for years, most notably in high-speed trains. Electromagnets lift the train into the air, and keep it from touching the tracks, which means less wear and tear, a smoother ride, and less friction from the tracks. Henderson sees his company’s technology as a more versatile solution since you could theoretically put it on individual train cars instead of relying on the tracks, making them easier to move around train yards. 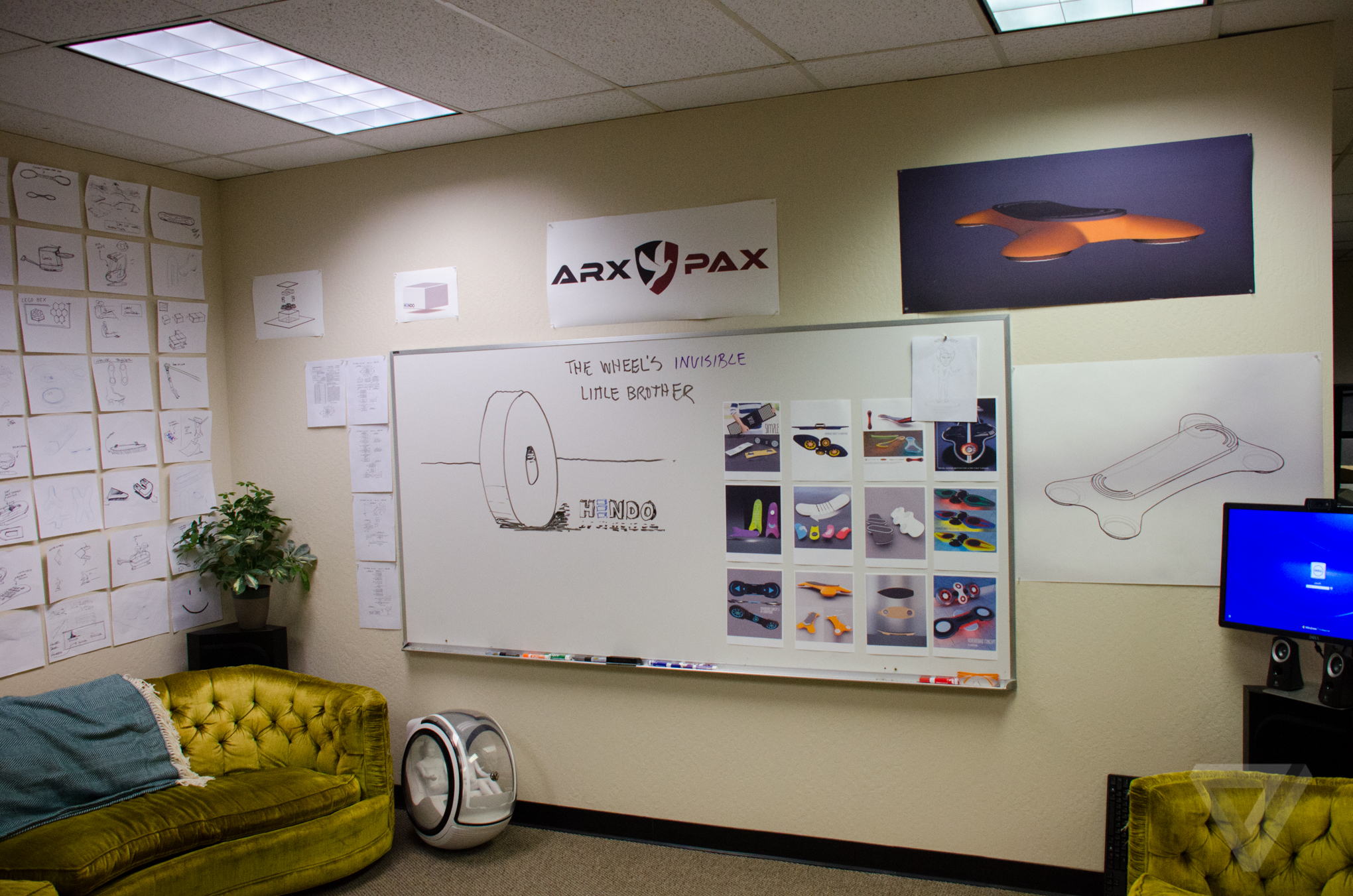 But Henderson doesn’t want to stop at trains, or even hoverboards. He envisions it as something that could be useful for lifting a building off its foundation. In fact, that was the premise of the company before it was even talking hoverboards. A patent Henderson filed for the company last March envisions a three-part system that would put the hover engines in the very foundation of a building, lifting it up and out of the way of danger.

When I ask how you could handle 10 feet of water when this small white box and hoverboard lift up just a few centimeters, Henderson says the scale can go way up, and lift things even higher. The tricky part is keeping them from going out of control, which the company is still working on. That could keep the hoverboard from going bananas when you shift your weight the wrong way, and hopefully scale up to keep taller objects from toppling over. 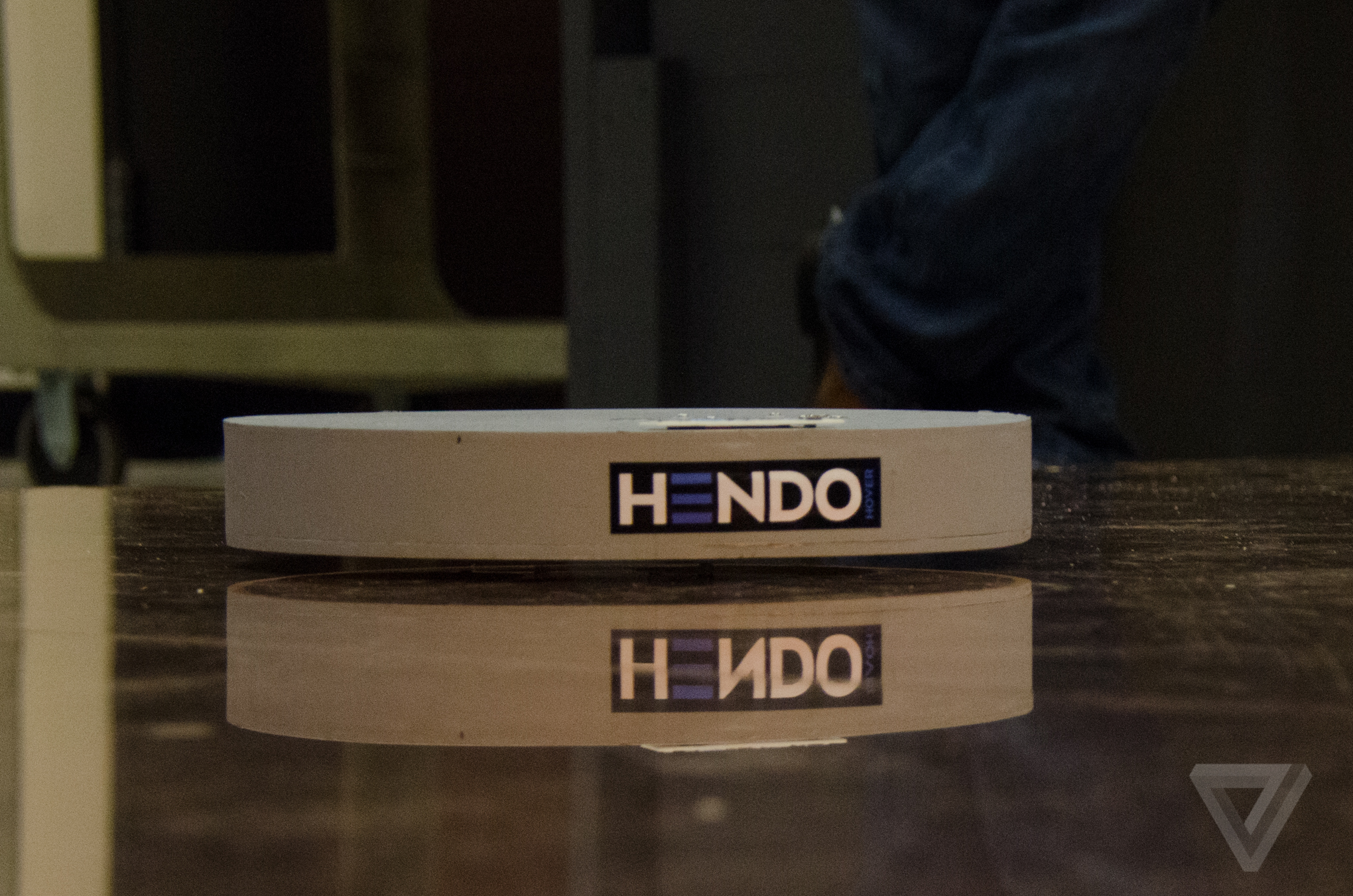 To demonstrate that it can take this technology and actually steer with it, Arx Pax has developed a prototype it’s calling the Manta Ray. It’s a cylinder the size of a Roomba vacuum that has multiple engines on it, and can be adjusted to steer its direction and turn, though it doesn’t do it on a dime. It was plenty stable, though maneuvering it had a steep learning curve.

What Hendo is working on is very much a work in progress. I got a fun — albeit very loud — hoverboard ride out of it, but the ambition to put this beneath something like a house or an airplane seems utterly unfathomable at the moment. Even if you grant that the science is as innovative as these scrappy inventors claim, this company seems ill-equipped to get the technology there on its own. There are insanely big problems to solve, like getting this into a smaller, quieter package that lasts for more than a few minutes before running out of power. It also needs to work on more types of surfaces, and cost less than a decent used car. And most importantly, it needs to work in a way where people won’t easily fly off. The potential payoff is saving buildings, lives, and untold amounts of money. Until then, the whole hoverboard part is still something that’s perhaps best experienced at the movies.